Trials motorcycles offer a riding experience unlike anything else on two wheels. These competition-spec machines are designed to traverse crazy obstacles, whether they’re boulders, huge logs, or monster truck tires. This genre of motorcycle is capable of crazy acrobatics that most wouldn’t think possible. For the 2020 model year, GasGas leverages the growing North American dealer network from its new Austrian owner, KTM. 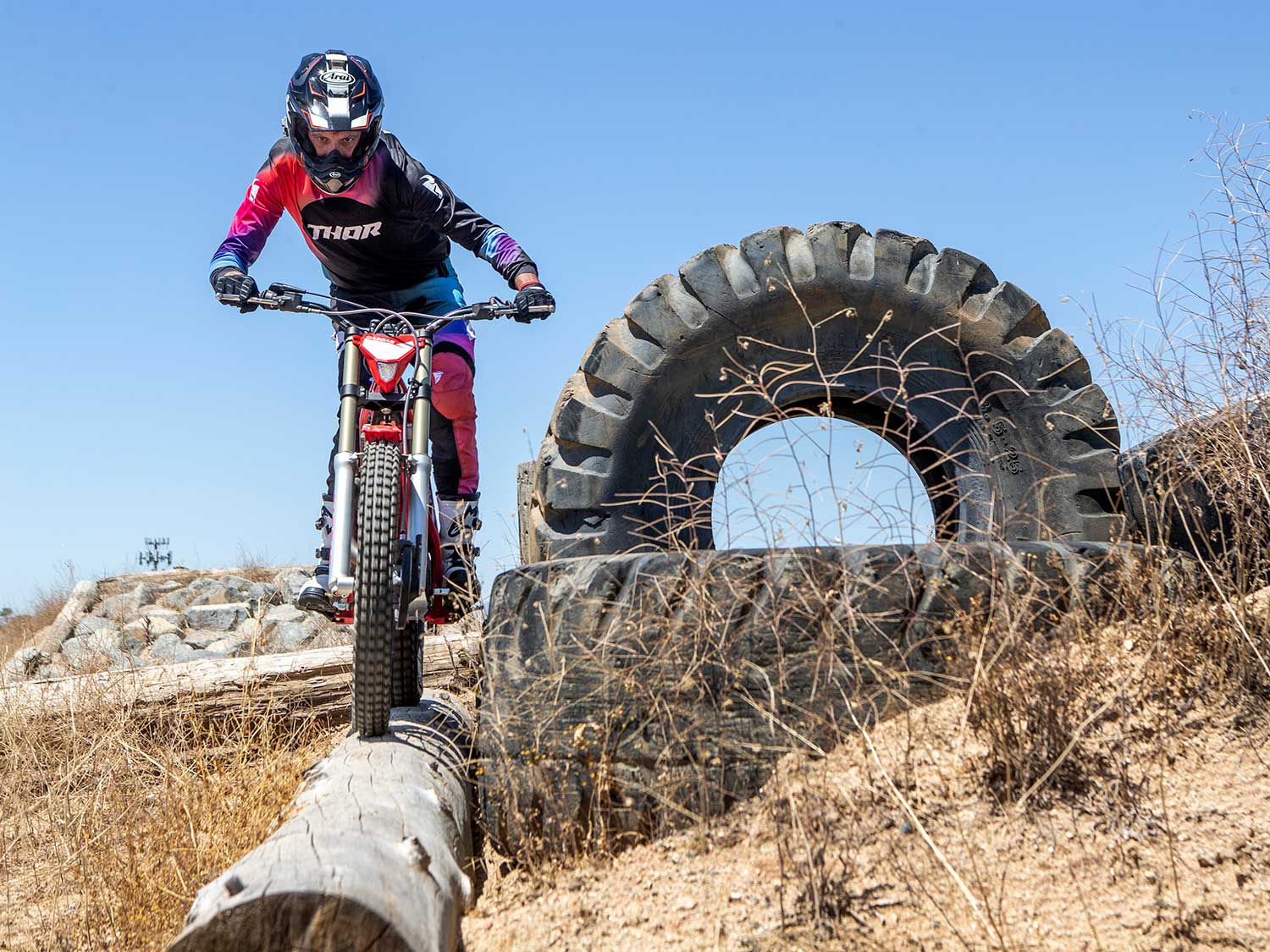 Built in Spain, the TXT Racing 250 ($7,599) is a liquid-cooled 250cc-powered trials bike. It is a competition-spec machine designed for someone who wants to compete in a trials competition or ride recreationally in lieu of a conventional enduro bike.

“Trials has always been an underground sport in the US,” 10-time AMA trials champion and GasGas team manager Geoff Aaron says. “It’s a difficult sport to do so it’s a little bit humbling.” 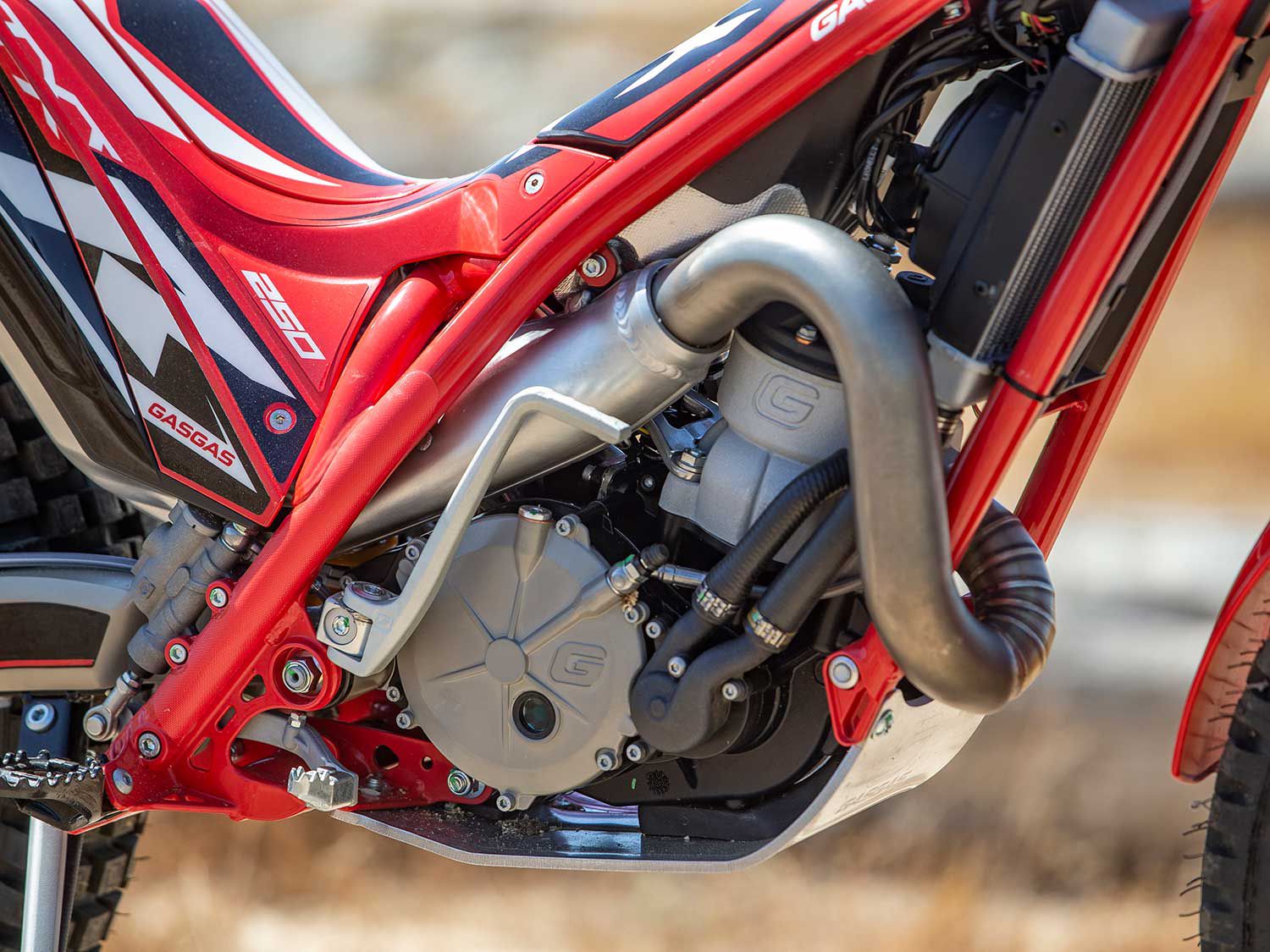 The TXT Racing 250 is powered by a 248cc liquid-cooled two-stroke single. A manual kickstarter and a twist of the throttle (it is carbureted) let the engine fire. (Jeff Allen/)

The GasGas TXT 250 is powered by a water-cooled 248cc two-stroke single. As opposed to fuel injection, it employs an old-fashioned carburetor that feeds the engine premix (80:1 ratio). A kickstarter and good ol’-fashioned prod of the twistgrip get the engine lit. 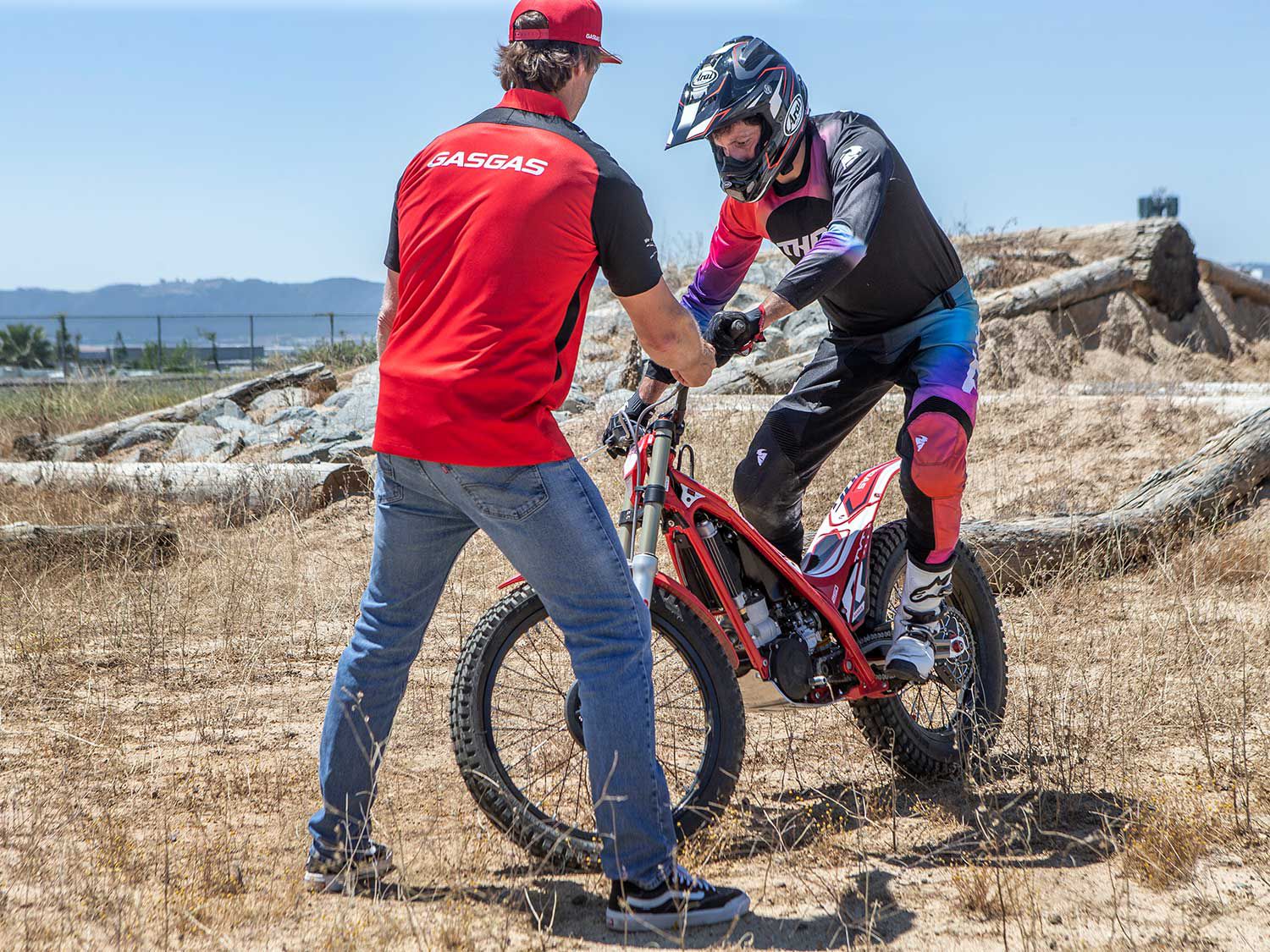 The riding stance on a trials bike is much different than a traditional off-road motorcycle. A more mountain bike-like stance applies to trials. (Jeff Allen/)

Compared to a two-stroke moto bike, the GasGas runs leaner in terms of mixture. That’s because the engine isn’t designed to operate at the lofty rpm of its dirt-jumping brethren. Instead the TXT is about low-end, immediate torque. From the moment the clutch lever is released, the engine has an astounding level of torque for a single-cylinder dirt bike. That muscle allows you to get up and over obstacles easily.

Patience and balance are the primary skills required for trials riding. (Jeff Allen/)

Although equipped with a six-speed transmission, the working man gears are first, second, and third. Fourth, fifth, and sixth gears are utilized for transferring to other parts of the trials course.

Riding this style motorcycle is all about balance and patience. If you’re an off-road rider who likes to go fast and hit obstacles hard, this type of riding style doesn’t apply as well to trials. Instead calculated maneuvers are the name of this game.

The TXT Racing 250 is equipped with a tiny LED head- and taillamp that’s used to help navigate transfer sections during twilight. (Jeff Allen/)

Although designed for competition, all TXTs come with a LED head- and taillamp so one can navigate transfer sections during twilight.

This category offers a unique riding experience, including the absence of a rider seat. It’s more mountain bike-based in terms of riding stance. For example, the rider stands upright and centered on the footpegs. And you don’t squeeze it like you would on a traditional moto bike. Your knees are apart—as are your feet. The idea is to let the bike move beneath you. Like a mountain bike over treacherous terrain, you want the suspension to work and let the motorcycle do the heavy lifting. 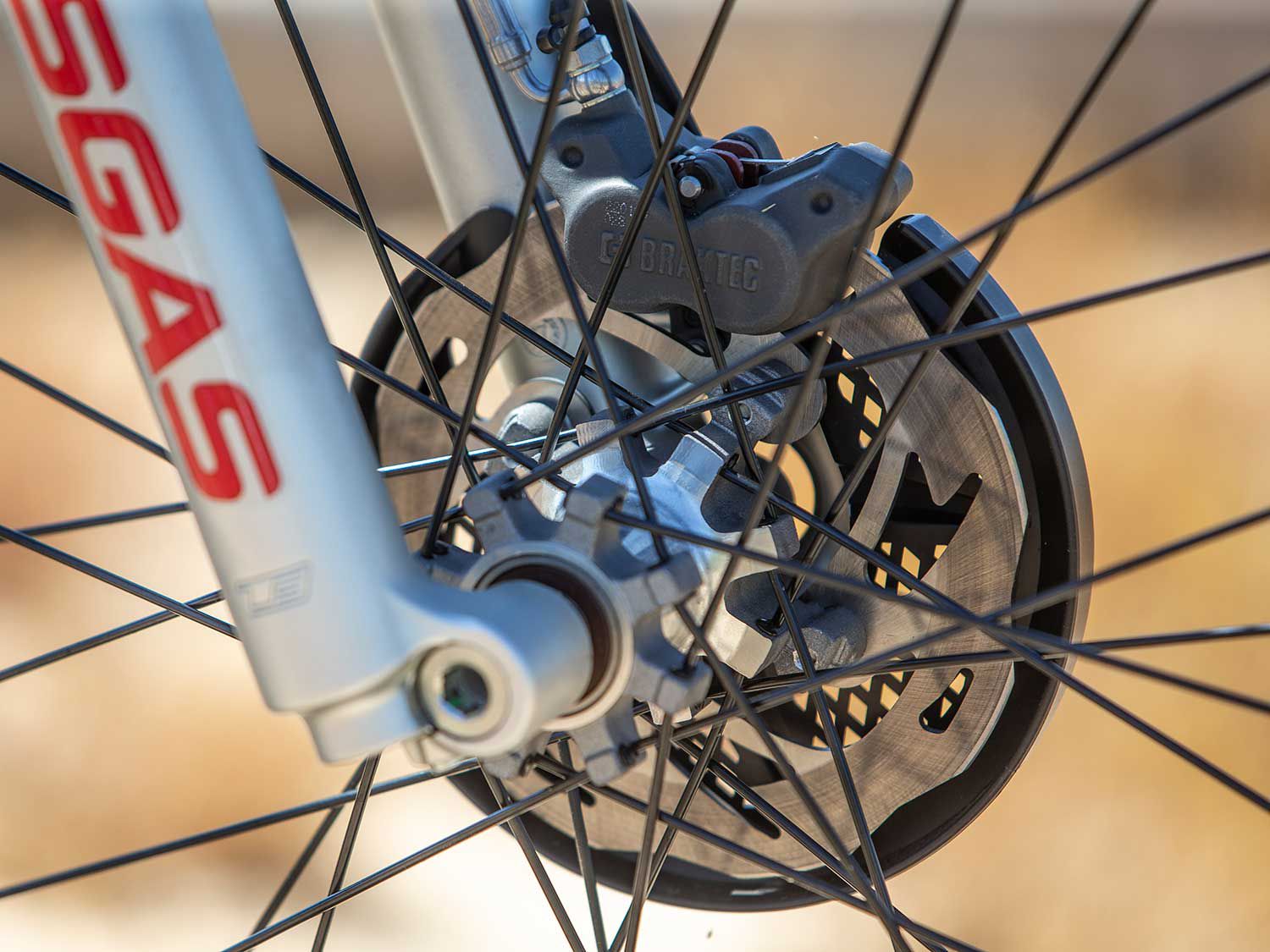 Hydraulic disc brakes deliver suitable power, however we expected the front brake to offer more lever feel sensation—especially considering the delicate maneuvers a trials bike is capable of. The fork and shock employ nearly 7 inches of travel, and suspension calibration is more springy-feeling compared to a traditional off-road bike. This facilitates a degree of pop so experienced riders can use suspension energy with the torque of the engine to hop over obstacles. The suspenders offer rebound damping control, so you can set spring return action to your desire. Like a mountain bike, riding loose and letting the motorcycle do the work for you is the name of the game in trials. (Jeff Allen/)

It rolls on a 21-inch front, 18-inch rear spoked wheels, just like an off-road bike. But the Michelin Trial Competition X11 tires, especially the rear, are incredibly gummy. This boosts traction over a variety of terrain and obstacles including hard granite rock and slippery wet logs. 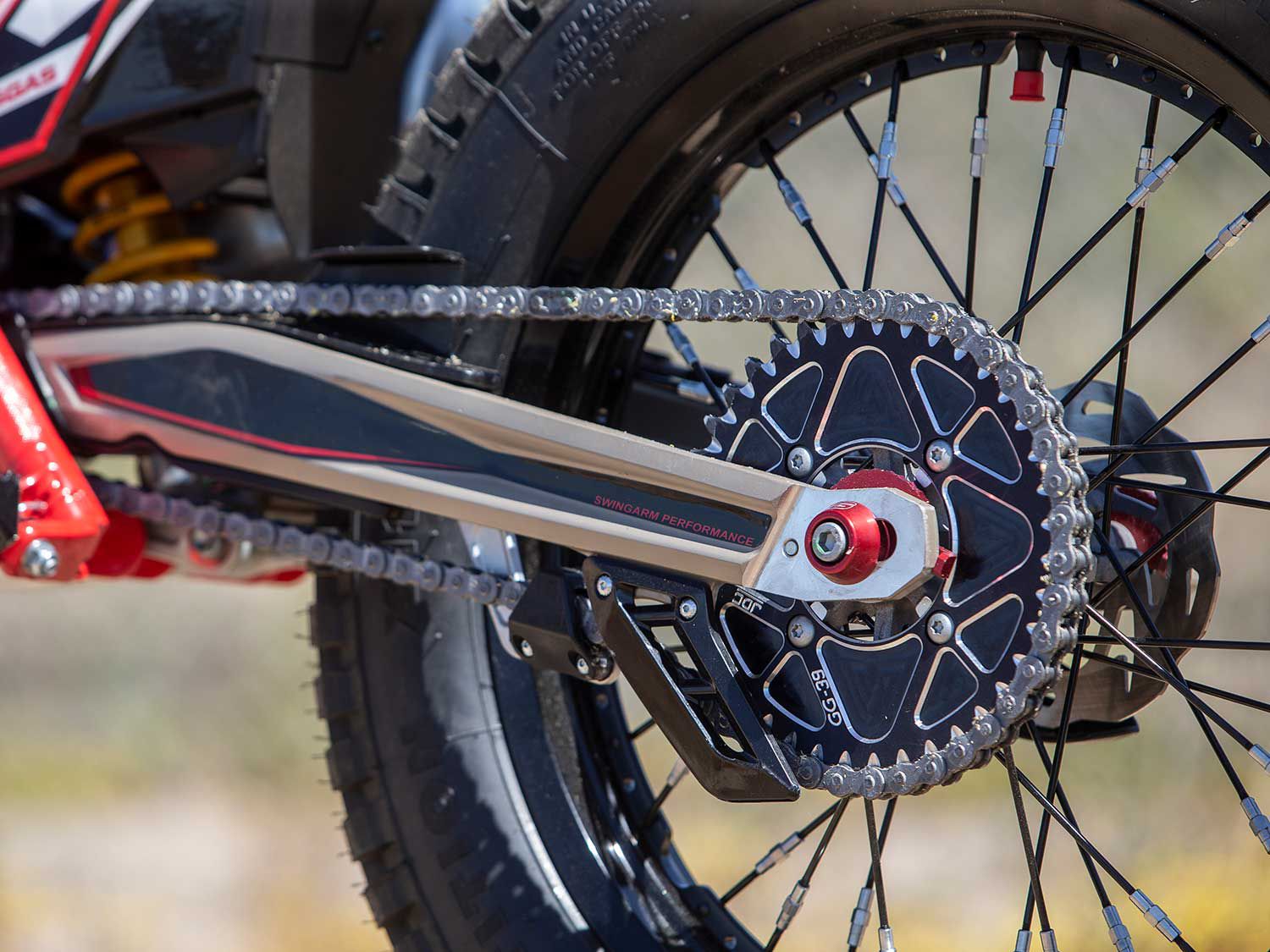 As opposed to a conventional motorcycle the kickstand is located on the right-hand side of the motorcycle. This makes it easier for someone to grab the motorcycle during a competition. (Jeff Allen/)

Also of note is the rear tire’s tubeless design. Conversely the front is designed to be run with a tube due to the tire’s short sidewall. The tube helps give the tire support so it doesn’t fold in on itself during extreme compression. Both tires are designed to operate around 5 psi. Multitime US trials champ, Geoff Aaron shows what a production GasGas trials bike is in a professionals hands. (Jeff Allen/)

If you’re seeking a motorcycle that’s going to teach you how to balance, paired with precise handling skills, these GasGas motorcycles are a great option.

“You don’t always have to go on a competition to get a smile,” Aaron surmises. “You can take these things on trails and use them as mountain bikes, throw them on the back of the motorhome and go camping. It has a lot of potential as a playbike and of course as a serious competition bike.” 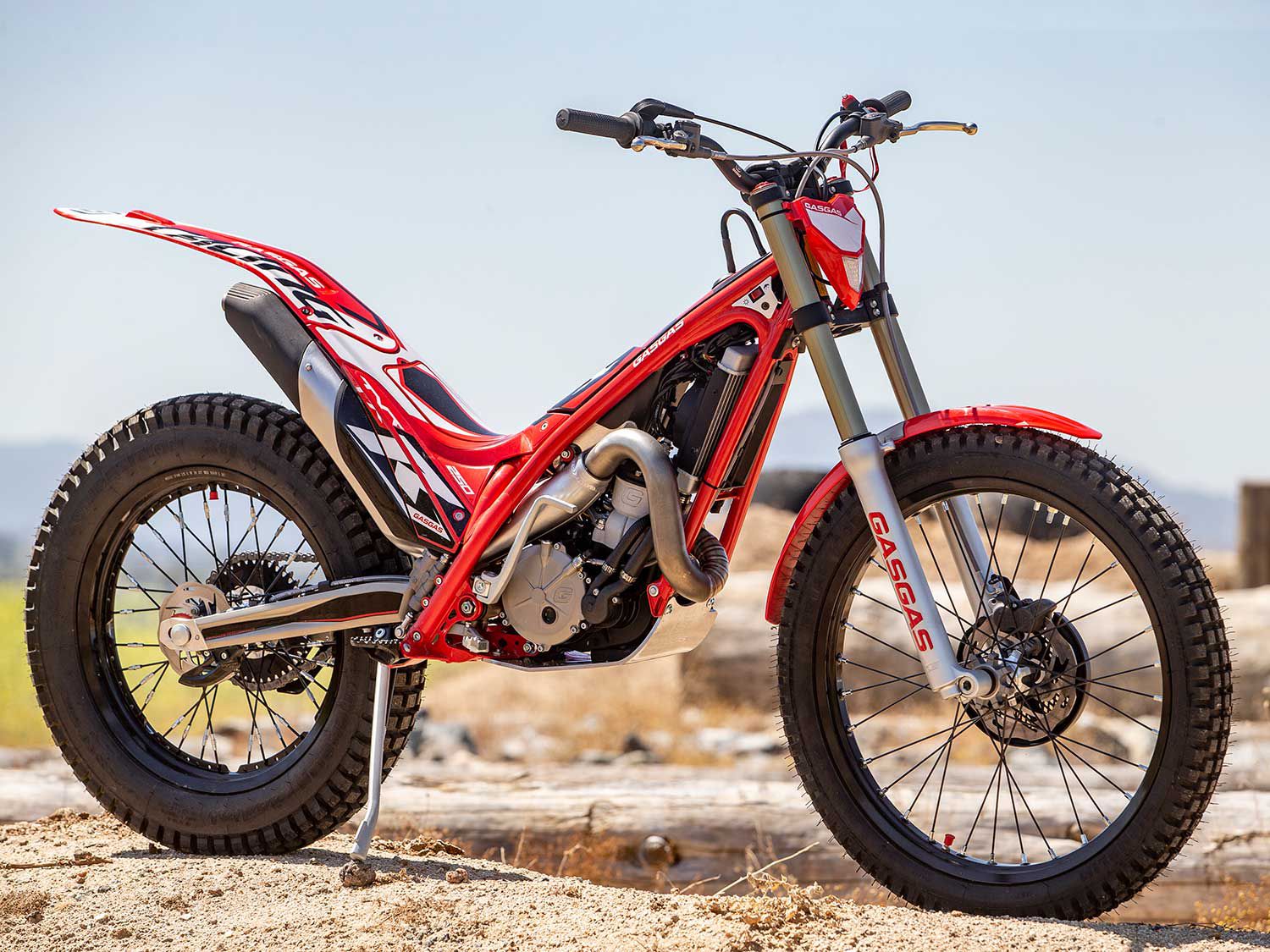 The TXT Racing 250 is positioned as the “all around” trials bike in GasGas’ four-bike lineup. (Jeff Allen/)

GasGas also offers a 125cc, designed for entry-level trials riders; a 280cc version for clubman; and the top tog of them all, the TXT Racing 300 designed for competition in the premier class by top pros, including Aaron. Yet bang-for-the-buck-wise, for the average weekend warrior this GasGas TXT Racing 250 is the best all-around option. Made in Spain and distributed by KTM, the 2020 GasGas TXT Racing 250 retails at $7,599. It’s designed for trials competition and play riding, in lieu of a traditional enduro bike. (Jeff Allen/) 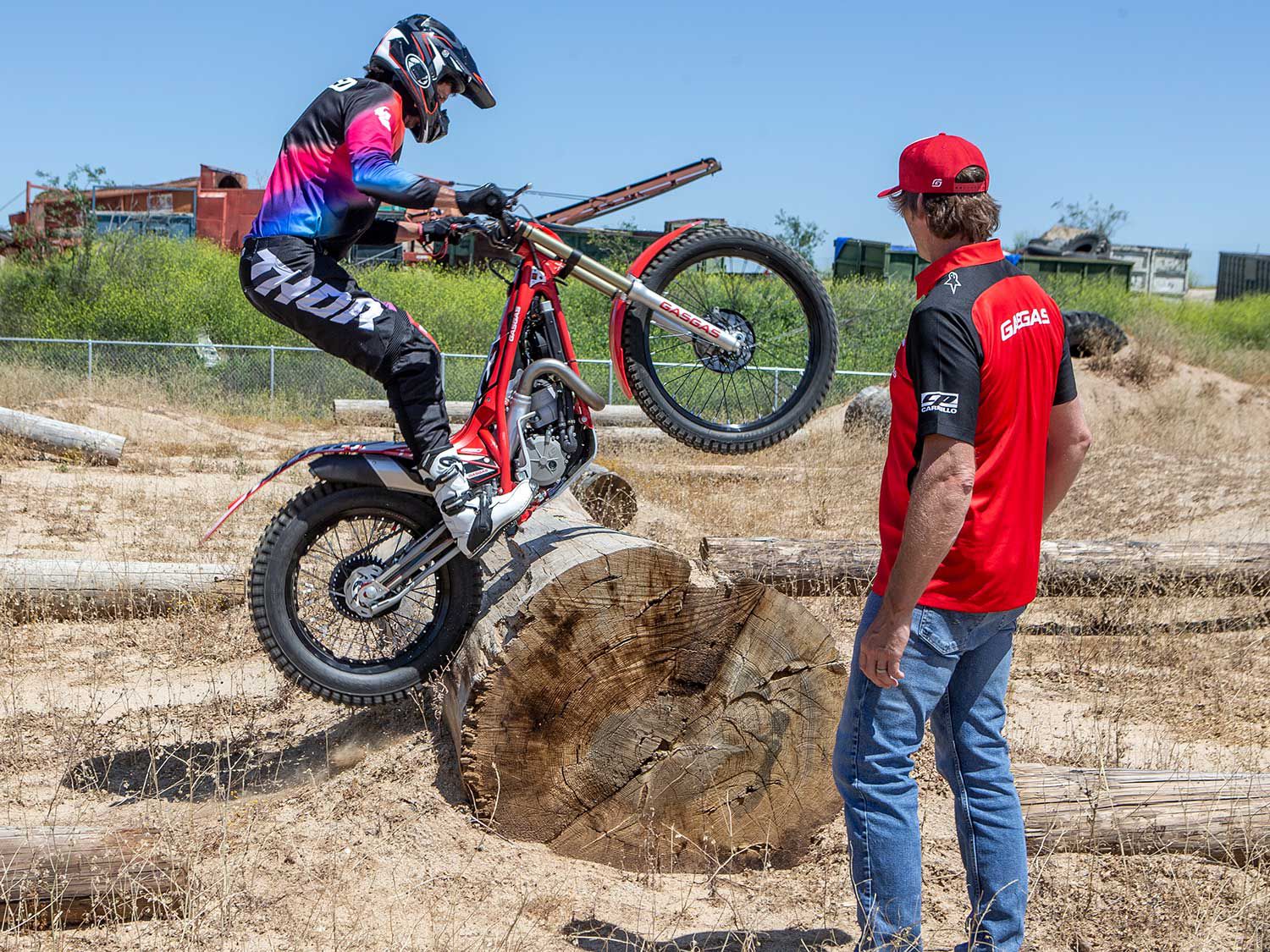 Trials motorcycles are capable of traversing obstacles like no other motorcycle made. (Jeff Allen/)