If you’re a die-hard Honda dirt bike rider, there is a lot to like about the road-legal CRF450L dual-sport. (Adam Waheed/)

Positioned as a dual-sport, the CRF450L borrows the CRF450R’s main frame and engine, including its legendary liquid-cooled Unicam 449cc single. Thumb the starter button and the engine chugs to life, albeit a tad stubbornly—just like older fuel-injected versions of the moto bike. Unlike the 450R, there are no adjustable power modes.

The CRF450L is a street-legal version of Honda’s top-of-the-line CRF450R motocross bike. Careful modifications were made for street use and everyday durability. (Adam Waheed/)

On the road the L feels like a production supermoto bike with a slim seat, plenty of legroom, and a wide, upright Renthal handlebar bend. Of course, the ergonomics are similar to its competition-spec dirt bikes aside from the wider radiator shrouds. The radiator also has an electric fan to dissipate engine heat at lower vehicle speeds. 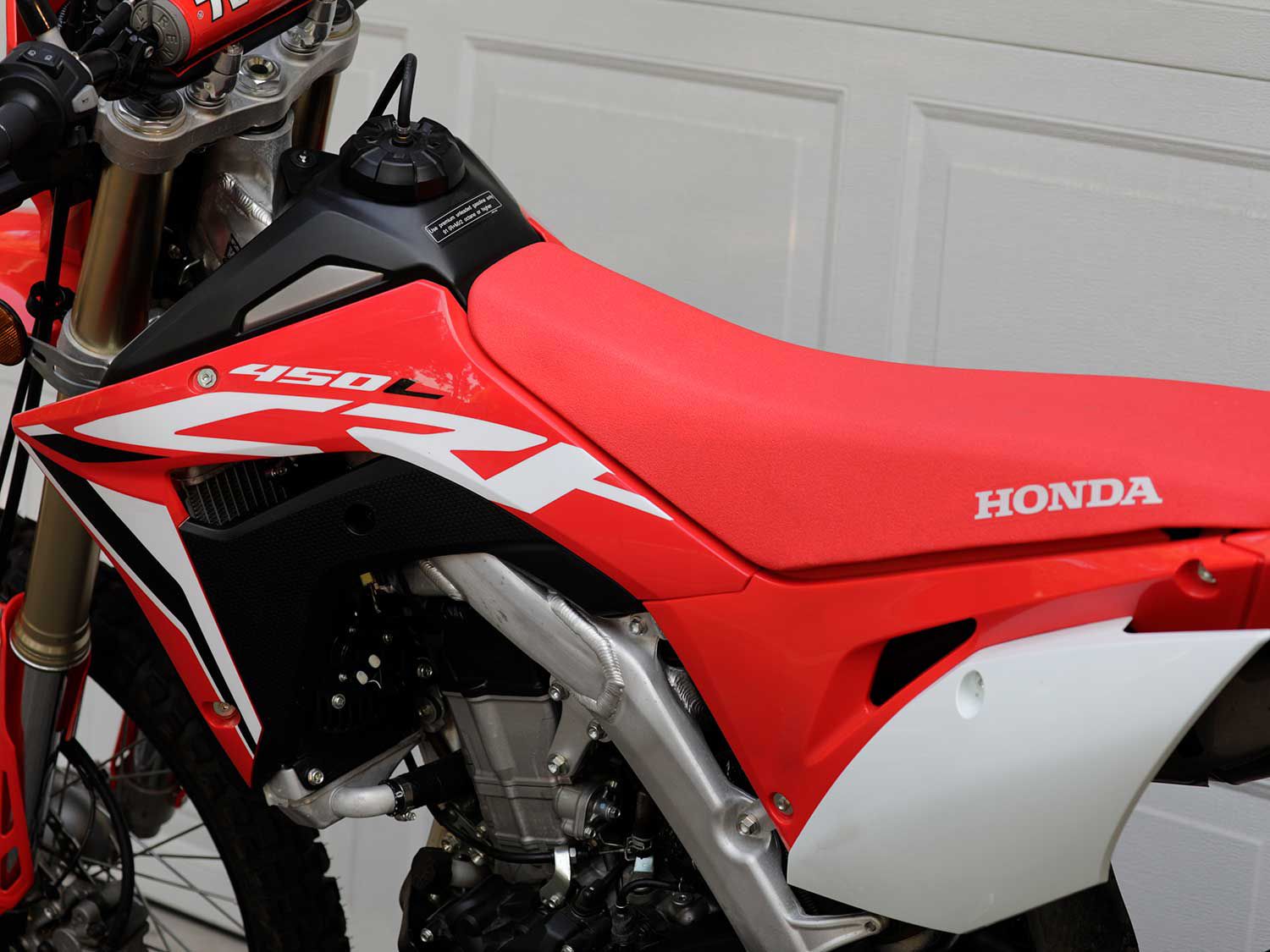 Height challenged riders will have a tough time straddling the CRF450L with its 37.2 in. seat height. (Adam Waheed/)

Considering its displacement, the engine has acceptable torque for its size, however power is far more muted than the R-spec 450s. Taller final drive gearing and a wider-ratio six-speed gearbox have something to do with its lack of bite. Though we’d be lying if we didn’t miss the moto bike’s bottom-end bark. Still, we appreciate how quietly the L runs and the lack of drivetrain and tire noise which is impressive for a road-going dirt bike. 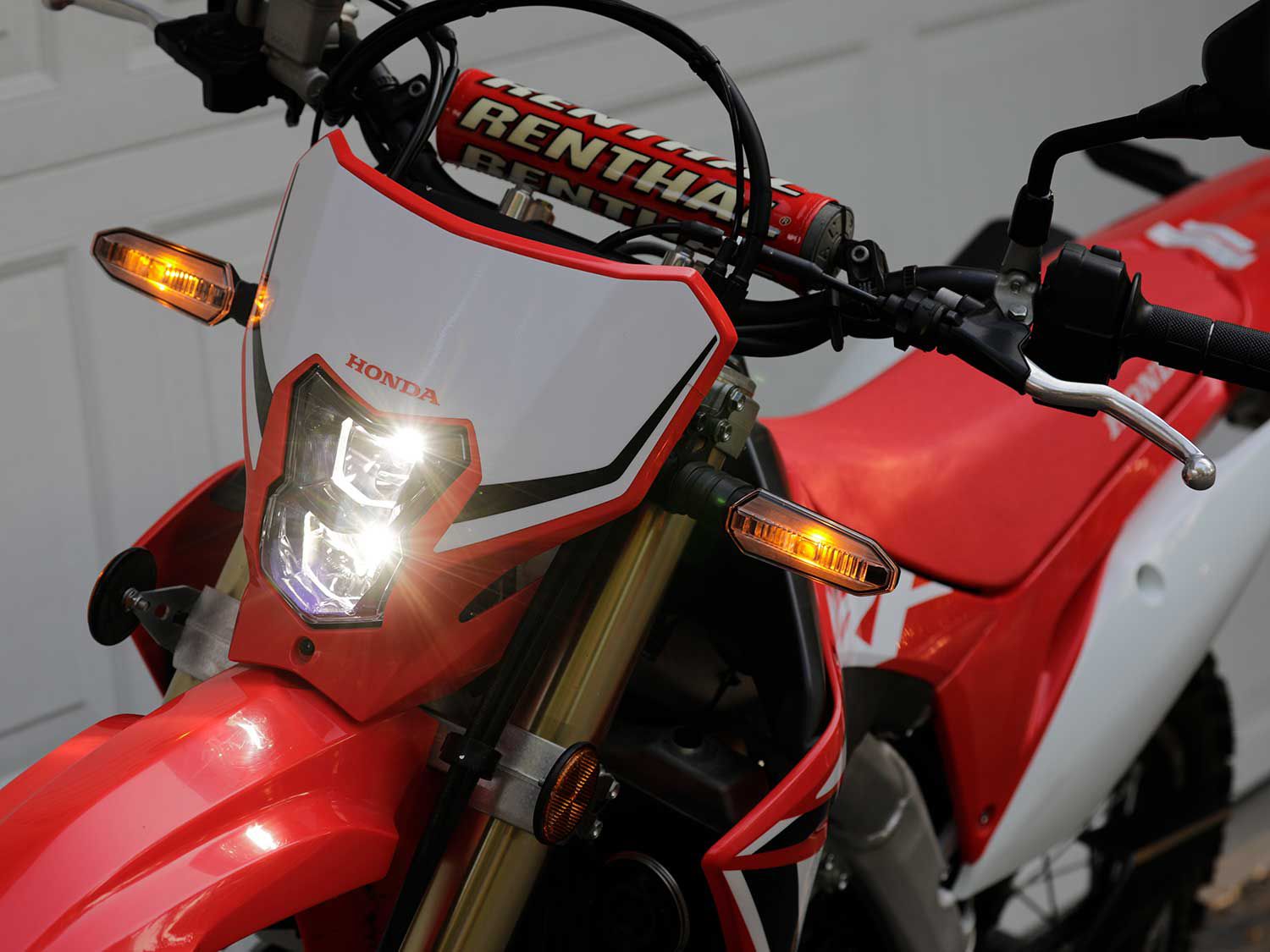 LED lighting is used at all ends on the CRF450L. The headlamp is brighter than some aftermarket setups used in Baja racing a decade ago. (Adam Waheed/)

At speed the engine does deliver, at times, excessive vibration, but it’s a moto bike so we’re willing to live with it. Top speed-wise the CRF is good for around 90 mph, however the soft-ish IRC GP tires make it a tad intimidating to ride at that speed. We do appreciate the fitment of true dirt bike-sized 21-inch front and 18-inch rear spoked aluminum wheels. 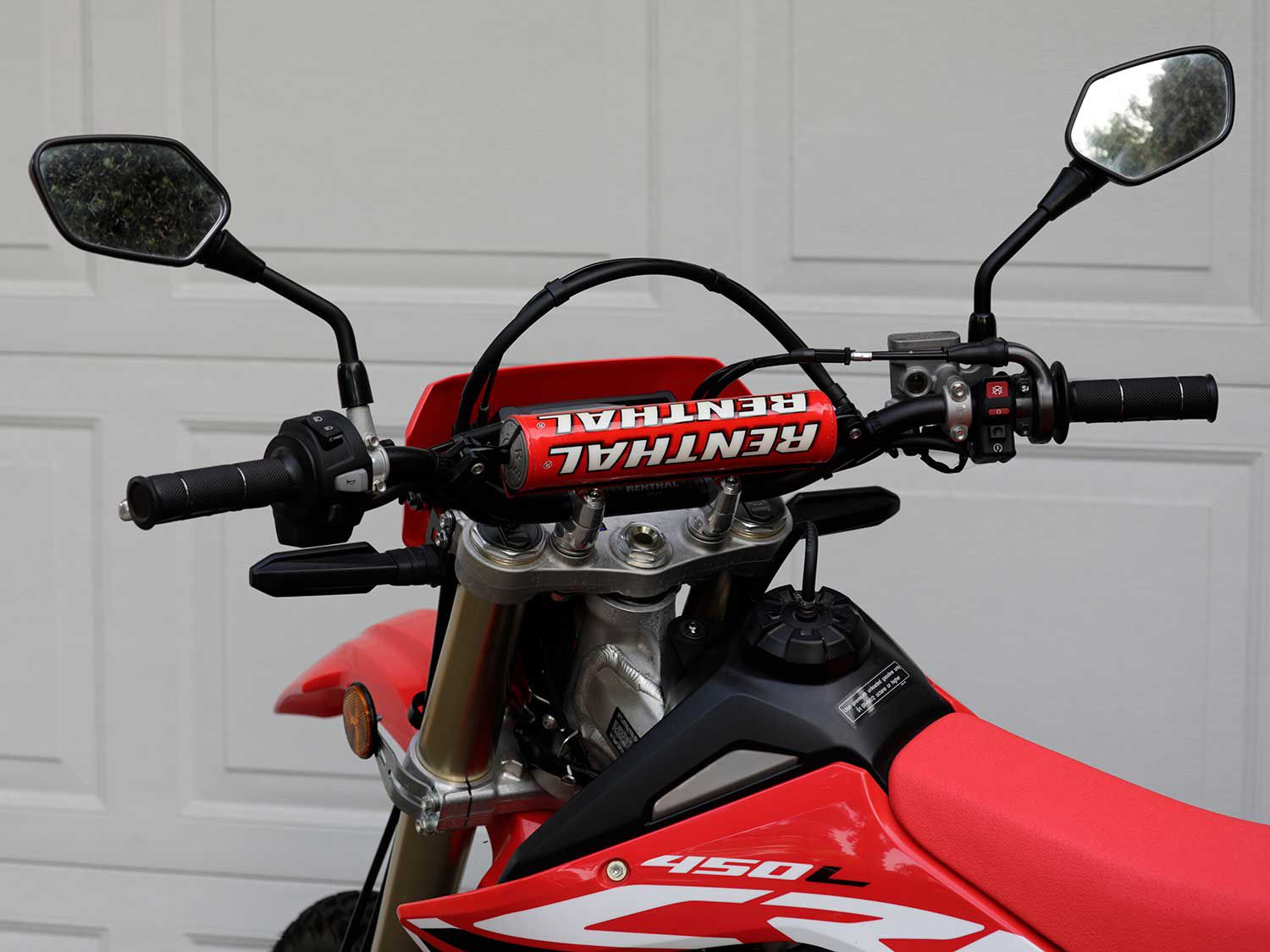 It’s no surprise that the CRF450L has dirt bike-like ergonomics. We like the tall wide Renthal handlebar that affords a commanding “elbows up” riding style. (Adam Waheed/)

The engine drinks from a 2-gallon titanium stamped fuel tank, and a low-fuel light inside the rectangular shaped digital dash lets you know when it’s time to fill up. Although a tad small, the display also provides fuel economy and trip data, as well as a speedometer. Full LED lighting not only makes for a modern-looking dual-sport, but pays dividends during night rides. 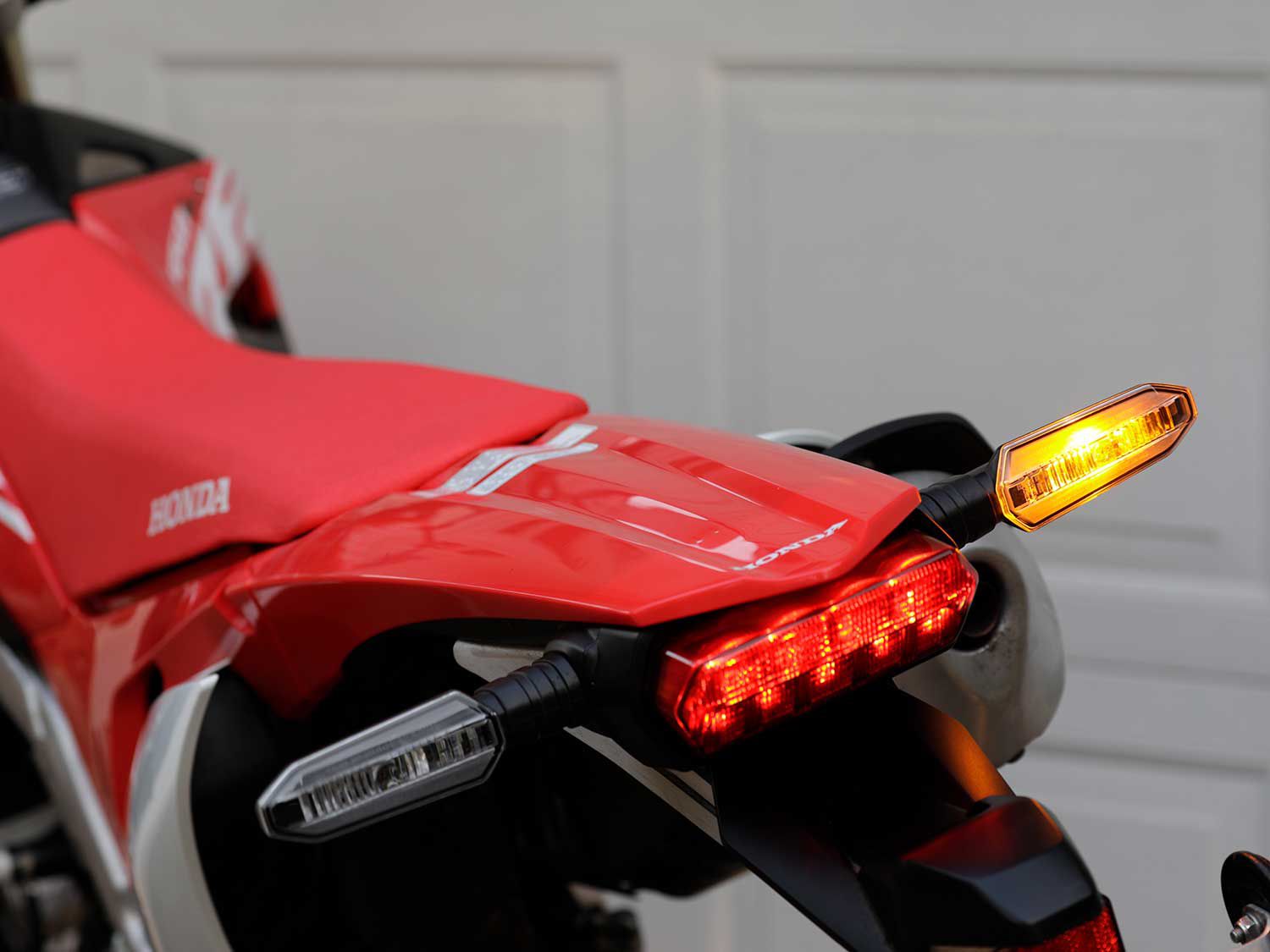 The CRF450L stands out with its bright LED lights. There are no passenger accommodations. (Adam Waheed/)

With more than 12 inches of suspension travel, the L soaks up bumps with ease and there is a lot of movement in the suspension for a road bike. Independent compression and rebound damping let you tweak suspension action and we appreciate the fork air bleeder screws which we wished all motorcycles came with. Brake early and respect the more-limited grip from the IRC tires, and all will be well. Compared to all of Honda’s other street-legal bikes, the CRF450L does not include ABS. We certainly aren’t complaining, but novice riders keep that in mind. Off pavement, the 450L benefits from more rigid suspension settings than we typically see in the dual sport class. Faster and/or heavier riders will appreciate its more “racy” settings, however it makes for a bike that can be more difficult to ride in the rocky stuff. Pair this with the engine that is susceptible to stalling at low running speeds makes for a dual sport bike that can be a handful. Keep the rpm and speeds up however and you’re in for a good time. With an MSRP of $10,399, the CRF450L certainly can’t be deemed cheap. But for those that want a street-legal CRF450R, the price is more than reasonable. (Adam Waheed/)

Despite a few squawks (the stall-prone single and rigid, for most, suspension settings), the CRF450L is a worthy option for urban riders who want to kick up some dust in the dirt. It’s the closest thing you can get to a street-legal CRF450R, and the best part is there’s no monkeying around the garage to get it. Although a tad pricey, if you value Honda’s legendary reliability, then Big Red’s 450 dual-sport is worth it. The CRF450L is powered by Honda’s legendary Unicam-equipped 449cc single. The engine covers are designed to dampen noise and the engine is in a more mellow state of tune for enhanced durability. (Adam Waheed/) 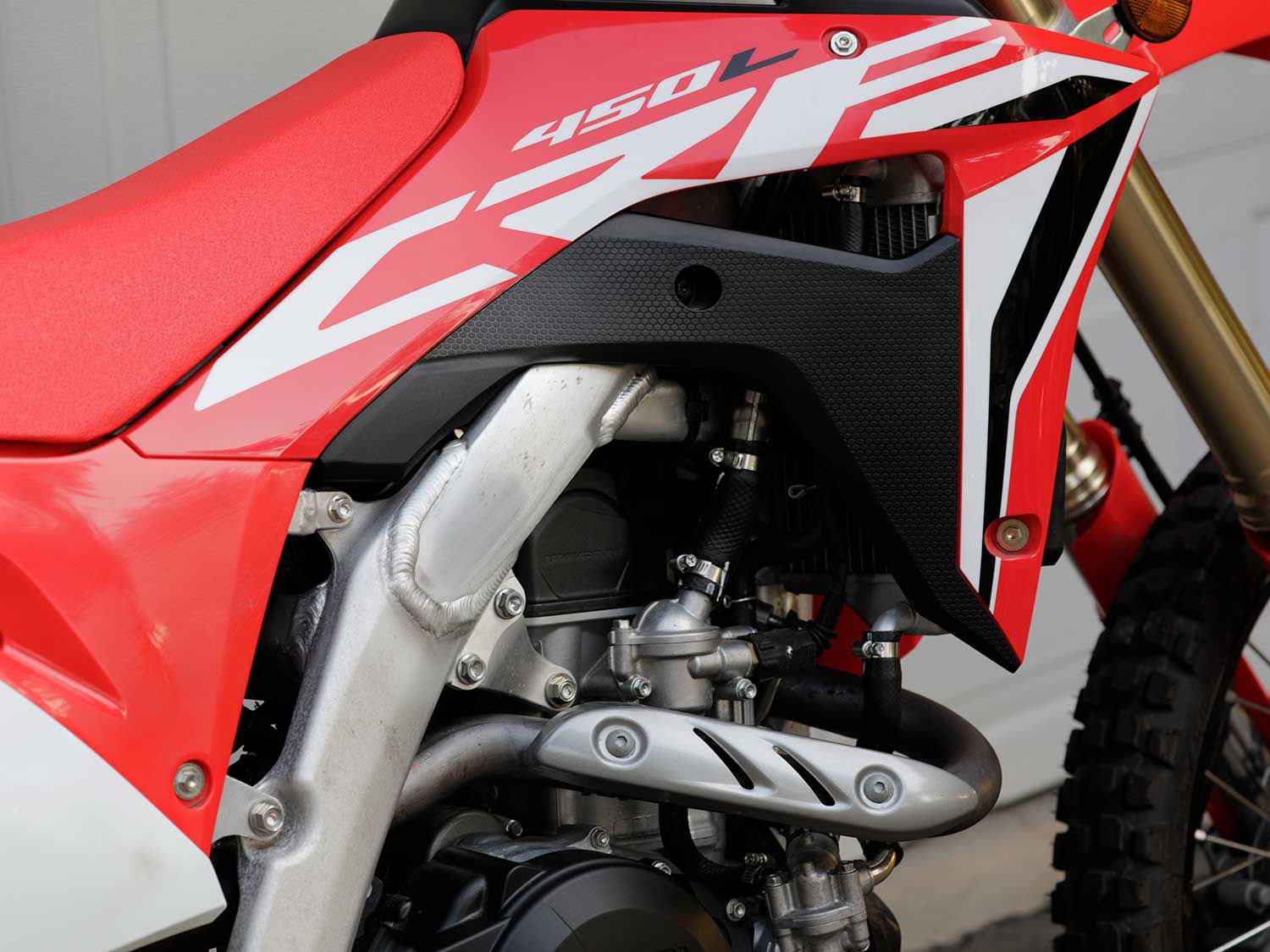 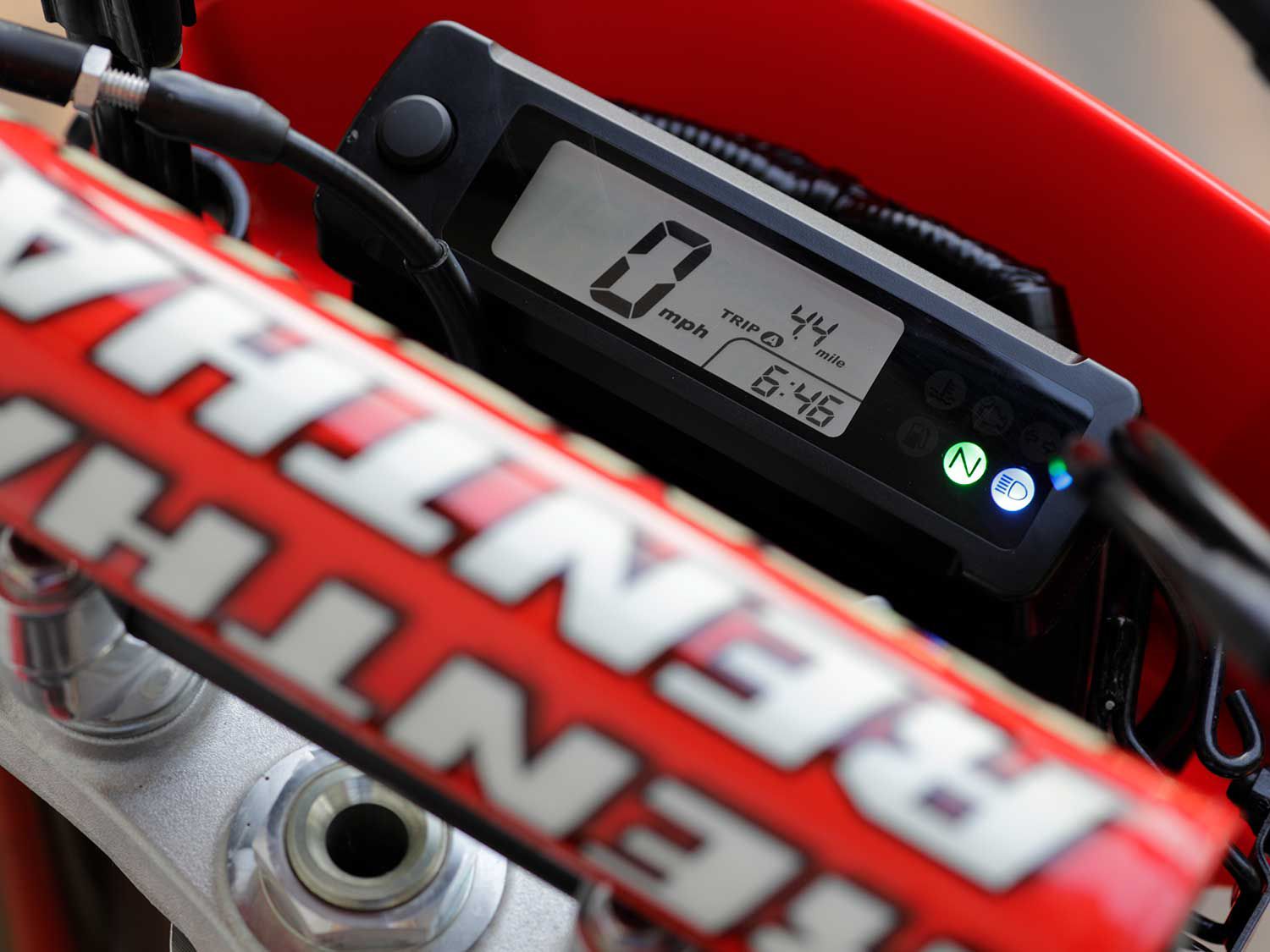 A small rectangular shaped LCD keeps tabs on the motorcycle vitals. It’s simple but effective and easy to read while riding. (Adam Waheed/) 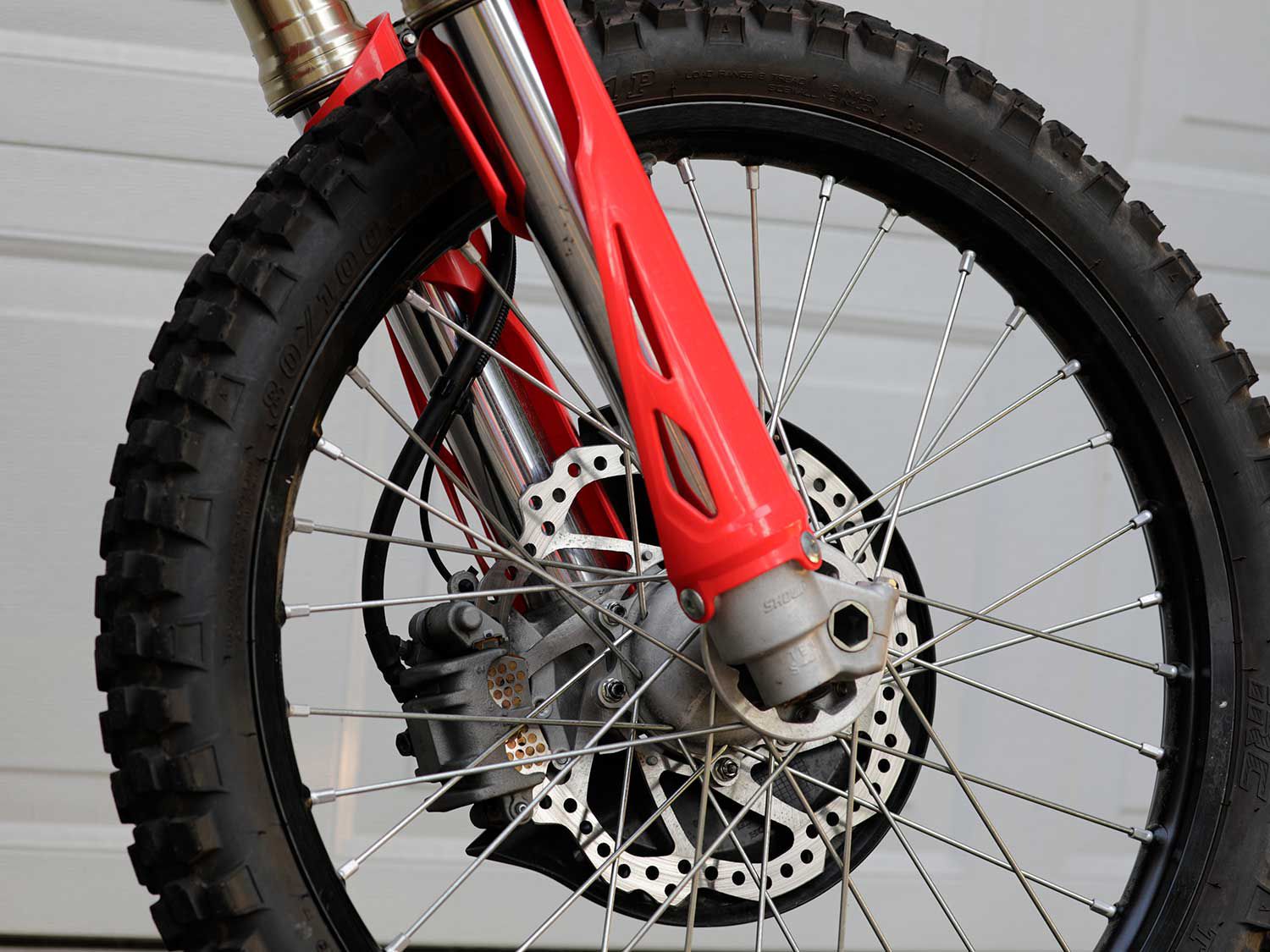 A special rubber coating on the drive sprockets help dampen noise as does material inside the swingarm. (Adam Waheed/) 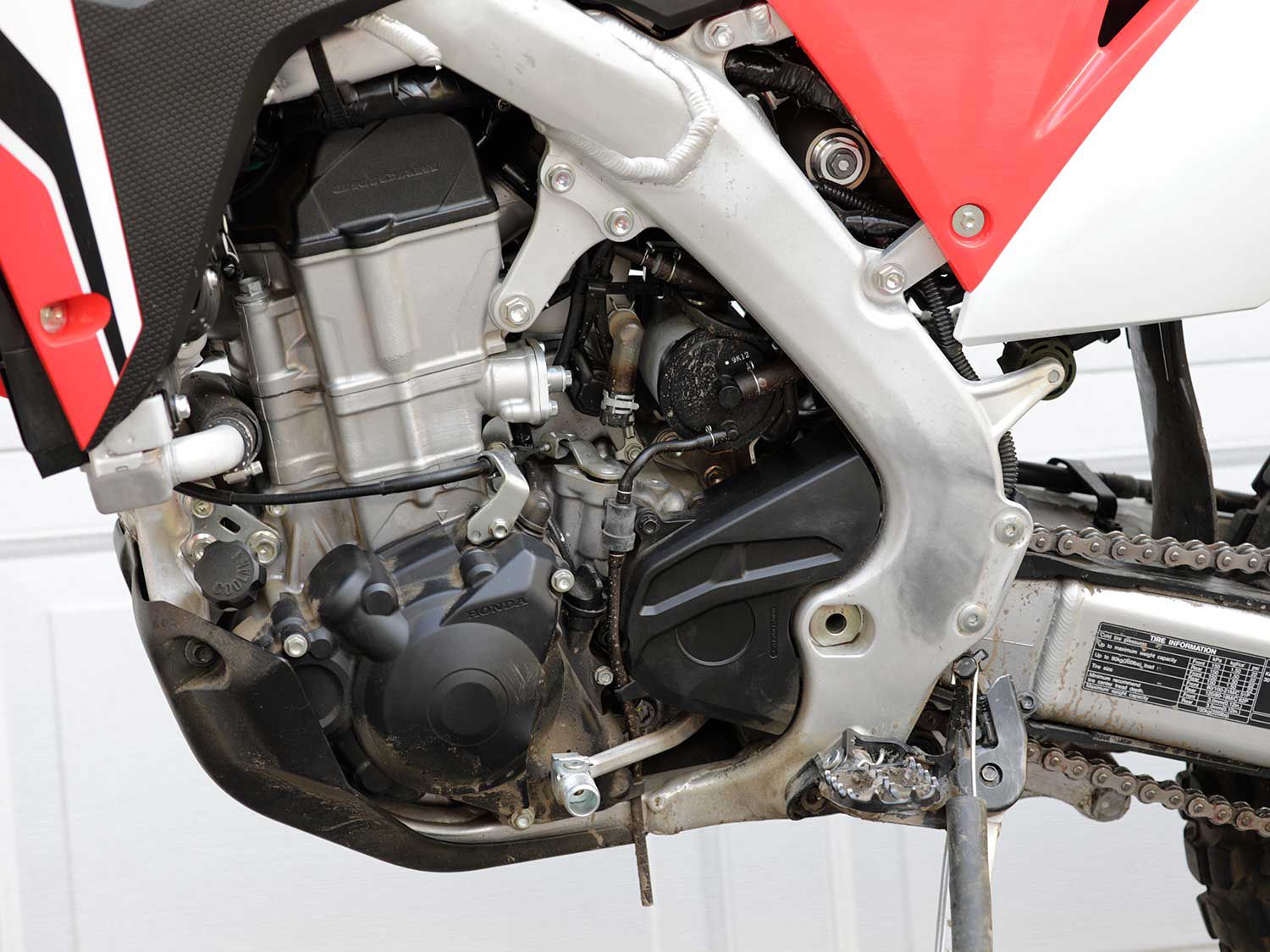 The CRF450L’s engine can be stubborn at times with it occasionally stalling at low rpm if you’re not careful. (Adam Waheed/)