If you need more proof of the growing popularity of small-displacement bikes, how about this: KTM has just announced that the new Duke 200 will be joining its US lineup for 2020. The single-cylinder baby Duke claims to be an “all-new” model for 2020, and in the US, it can get away with that claim; we’ve never seen the spunky 200 on these shores before. It has, however, been available in many other overseas markets since 2012, after KTM and Bajaj Auto Limited in India entered into an extensive partnership to develop liquid-cooled engines for street motorcycles in the then-sparse entry-level segment. The 200 Duke went on to become a best-seller in India, finally getting a makeover last year and possibly prompting a bigger worldwide push. It may seem late in the game to add a new bike for this model year, but given the renewed interest in easy-to-ride machines, here we are. 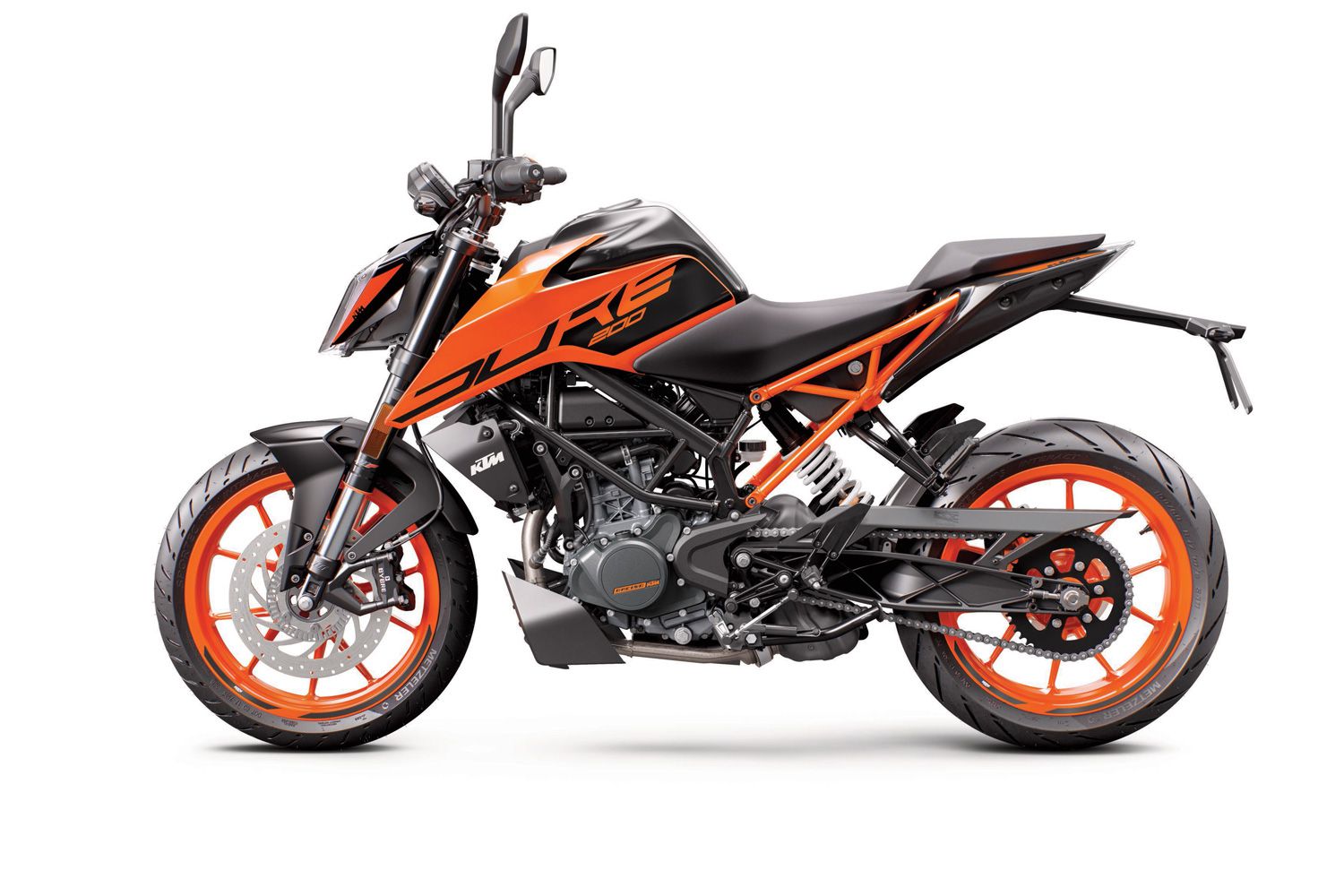 The 200 has been available overseas for some time now, but recently got a face-lift that likely eased the way for a US push. (KTM North America/)

As for the “all-new” part, well, let’s take a closer look. There is a new chassis on the 200 with a removable subframe (though both are still steel trellis units) and a generously sized 3.5-gallon fuel tank, but perhaps more noticeable are the sharper Duke-style design cues flush with triangular shapes that put the 200 closer to the 390 in the visual category. The spec sheet is a reasonable mix of practical and exciting, with a WP Apex 43mm inverted fork up front and a linkless, preload-adjustable WP monoshock at the back, a single front brake disc clamped by a four-piston ByBre caliper and dual-channel ABS as standard (with what KTM calls “Supermoto functionality”—you can disengage ABS in the rear). The tallish handlebar and lowish (31.6 inches) two-piece seat combine for an upright position that still allows for some movement in the twisties if you’re so inclined. It’s not a bad-looking bike, especially in the entry-level bracket. What about the engine? That’s the part that’s not all-new. The ultra-compact DOHC, 199cc, liquid-cooled single-cylinder mill with a four-valve head carries over pretty much unchanged from its previous iteration, and claims to make about 26 hp. Bosch EFI handles the injection electronics, and a close-ratio, six-speed transmission with a mechanical wet clutch rounds out the basic gear (sorry, no slipper function here). 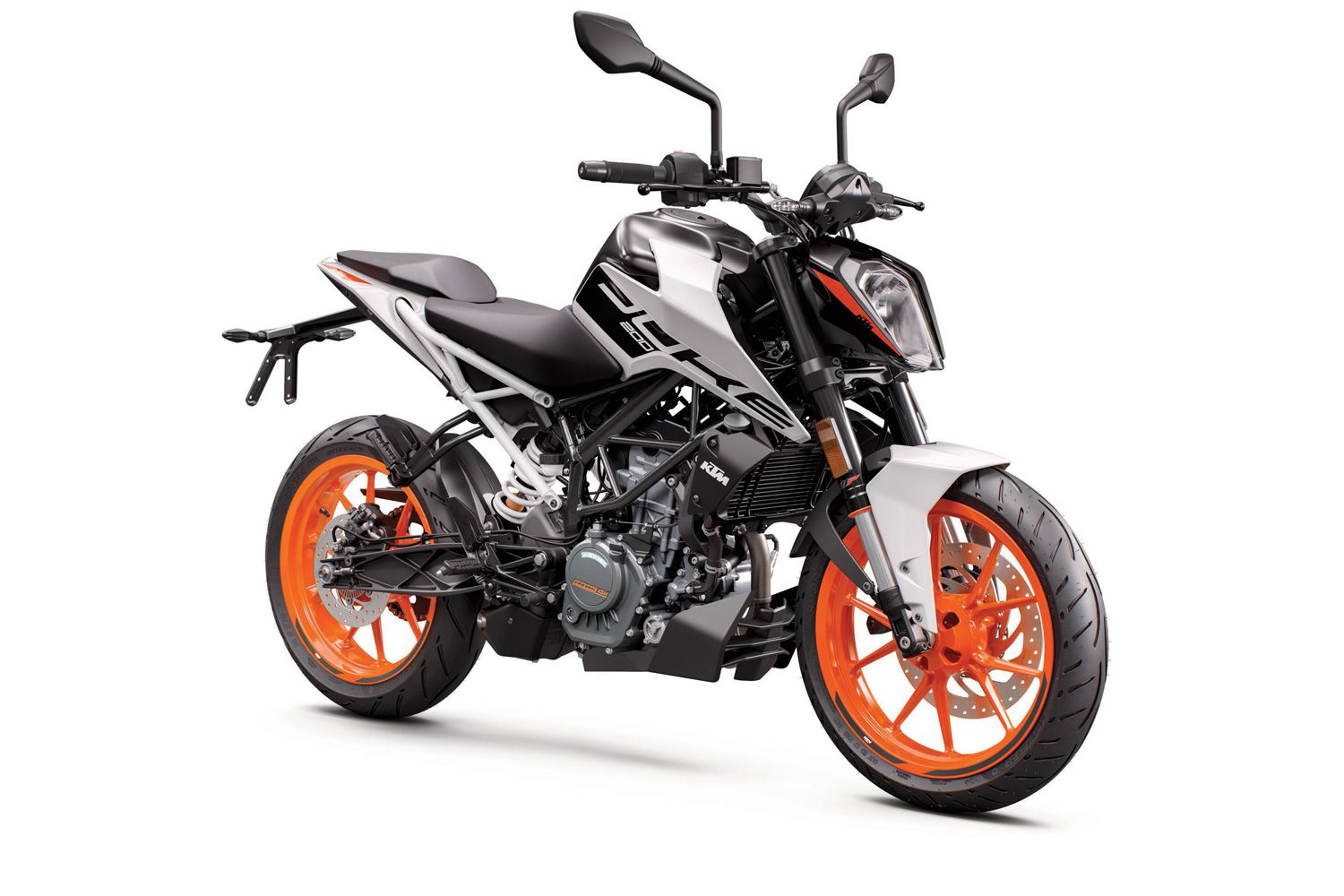 The flexible powerplant, light weight, and unique styling should qualify the 200 Duke either as an appealing commuter for fuel-thrifty riders looking for a bit more zip on the performance front, or entry-level pilots wanting something affordable yet competent. The 200 Duke’s trellis frame, bright paint, and edgy styling also give it a leg up in visual appeal. Another bonus is the lower-than-expected MSRP of $3,999—that’s $1,500 less than the 390. We’re looking forward to seeing how this thing does in the next class comparison. 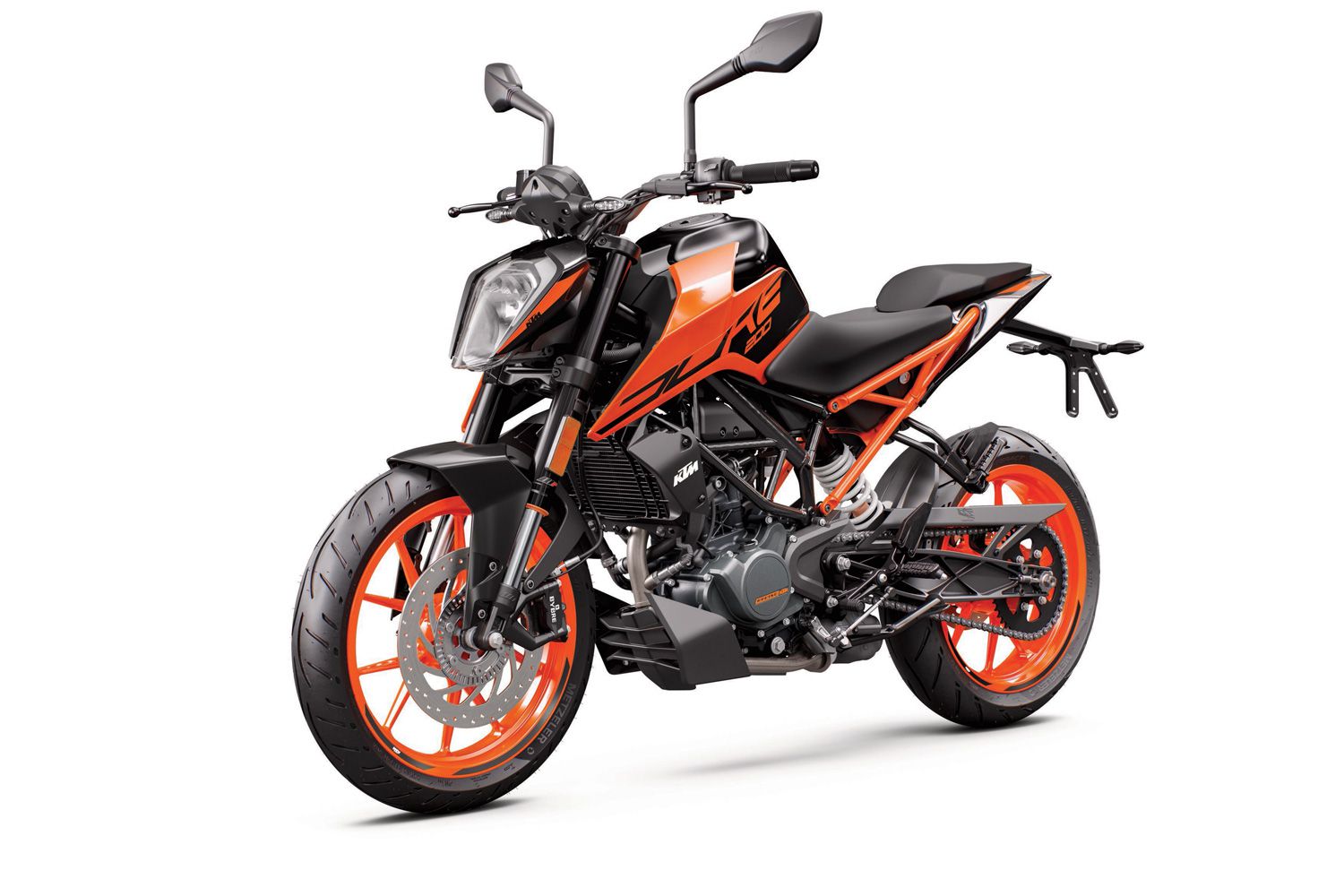 As on the 1290 Super Duke R, the four valves in the 200 Duke’s cylinder head are actuated by two overhead camshafts and ultra-hard, carbon-coated cam followers. (KTM North America/)

KTM says the 200 will be initially available this month, but for all the up-to-date details check out ktm.com/us.