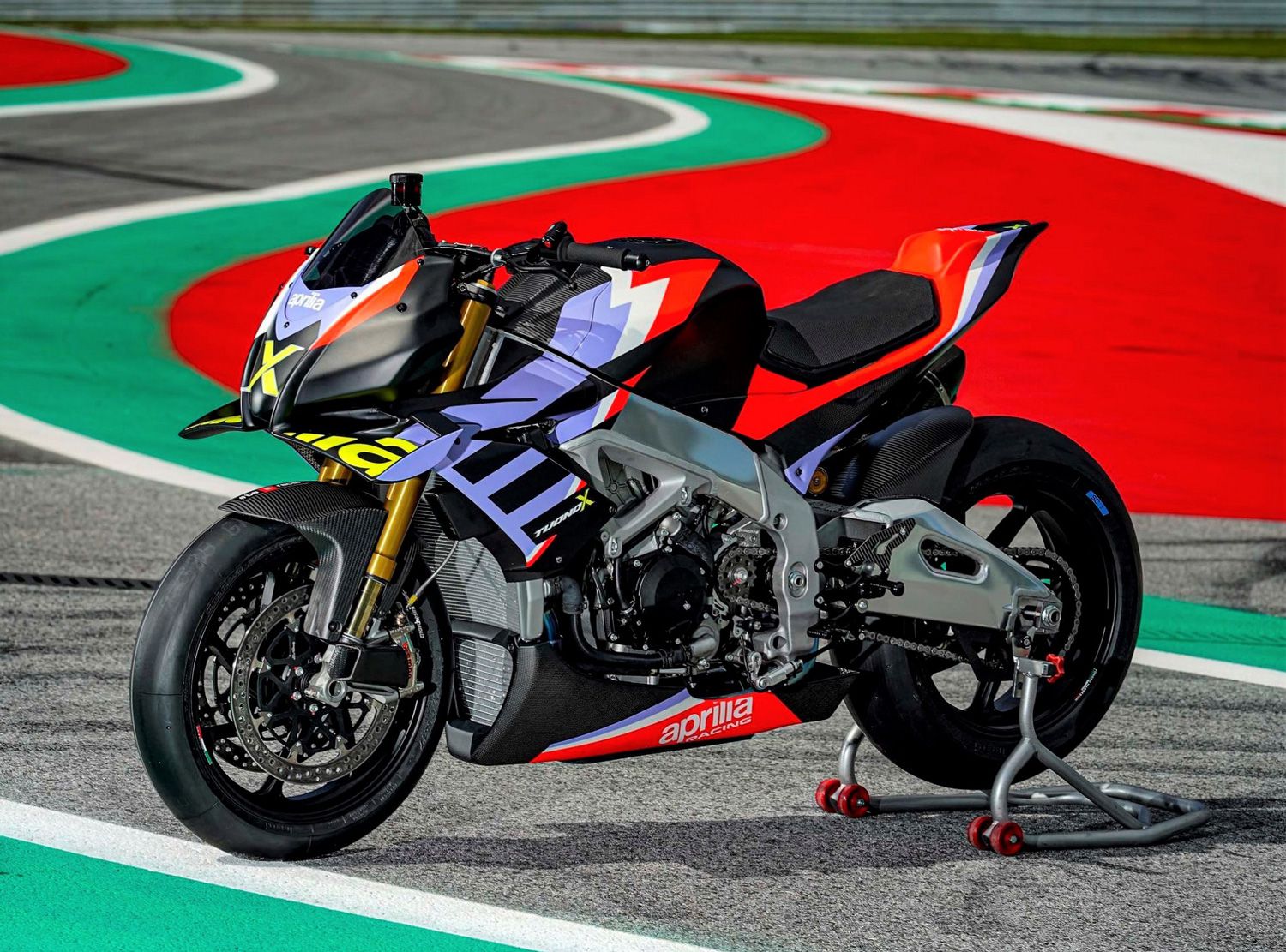 The level of adrenaline in the Italian motorcycle industry surges every time any manufacturer can make “a limited and numbered” edition of any very special and very hot model. First to capitalize on this marketing policy was MV Agusta, but in reality most of its “numbered” editions were the result of special paint and graphics. Ducati has always been very serious with its fascinating line of Superleggera editions, each of them definitely worth the identification numbering. Last to join the competition for the most exclusive “limited edition” model has been Aprilia, which is closing fast and in great style with its X models. First came the Aprilia RSV4 X with its frightening 225 hp to propel a mere 364 pounds. Aprilia hand-made only 10 units and the next day, every one of them was gone, so marketing bureaucrats at the Piaggio headquarters quickly realized that they might have taken better advantage of that situation. Enter the Aprilia Tuono V4 X. At the heart of the operation is the 65-degree V-4 powerplant, enlarged to 1.1 liters and generating well in excess of 200 hp (claimed), combined with truckloads of torque. The RSV4 X put out a frightening 225 hp to propel its mere 364 pounds, and the Tuono V4 X duly aims to follow in its footsteps, both in power and exclusivity. That means the bike will also be numbered by unit (the number of units hasn’t yet been confirmed) though actual production might end up being limited only by the response of the enthusiasts around the world ready to put down 34,900 euros (41,667 dollars), one after the other. 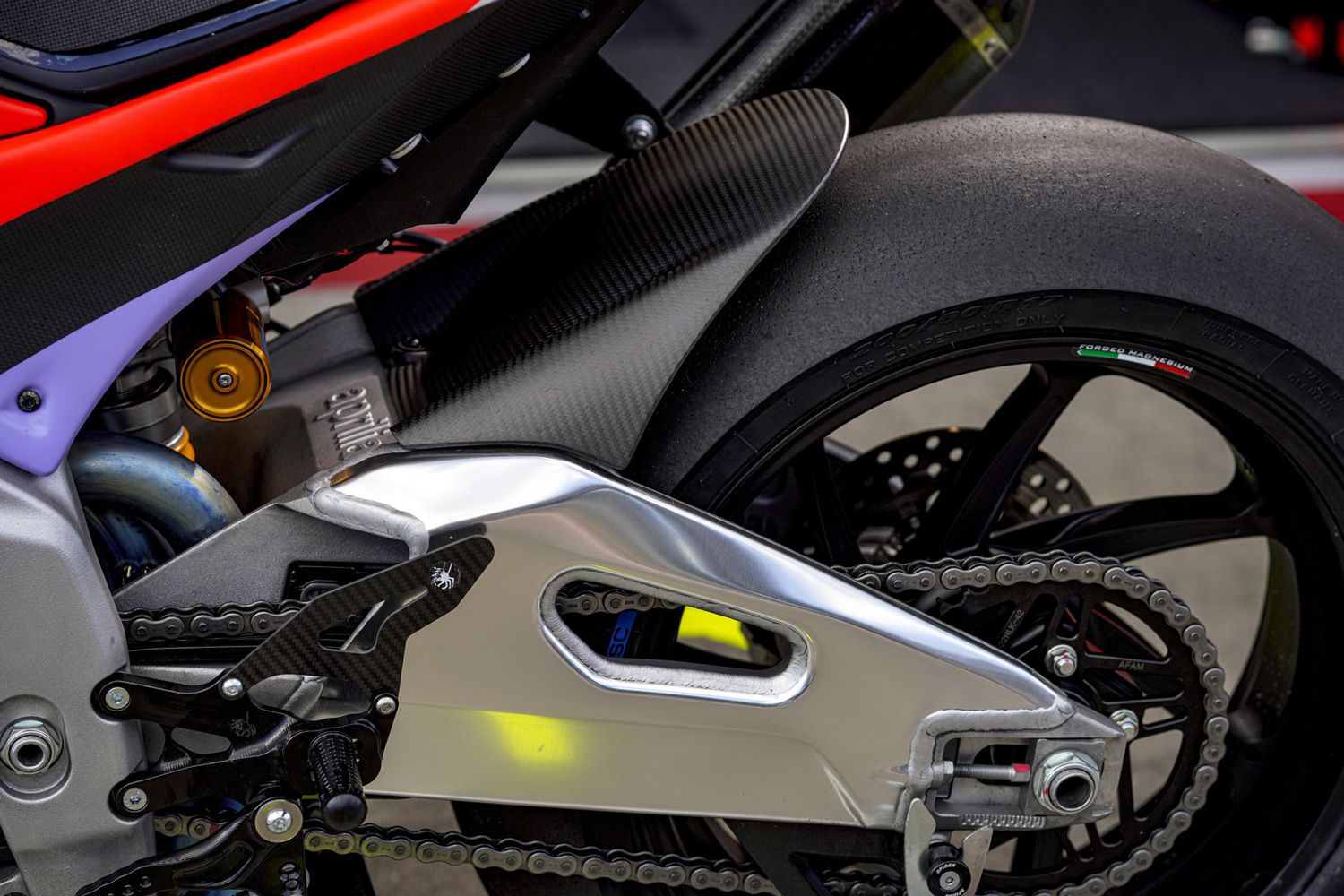 Overall, the Tuono V4 X looks an absolute superbike, stripped only of its fairing and given a “touring” handlebar in place of the clip-ons. And the bike is so absolutely fascinating in its very precious mechanical and aerodynamic execution that, in my humble opinion, it would shine even more under a less aggressive graphics scheme. 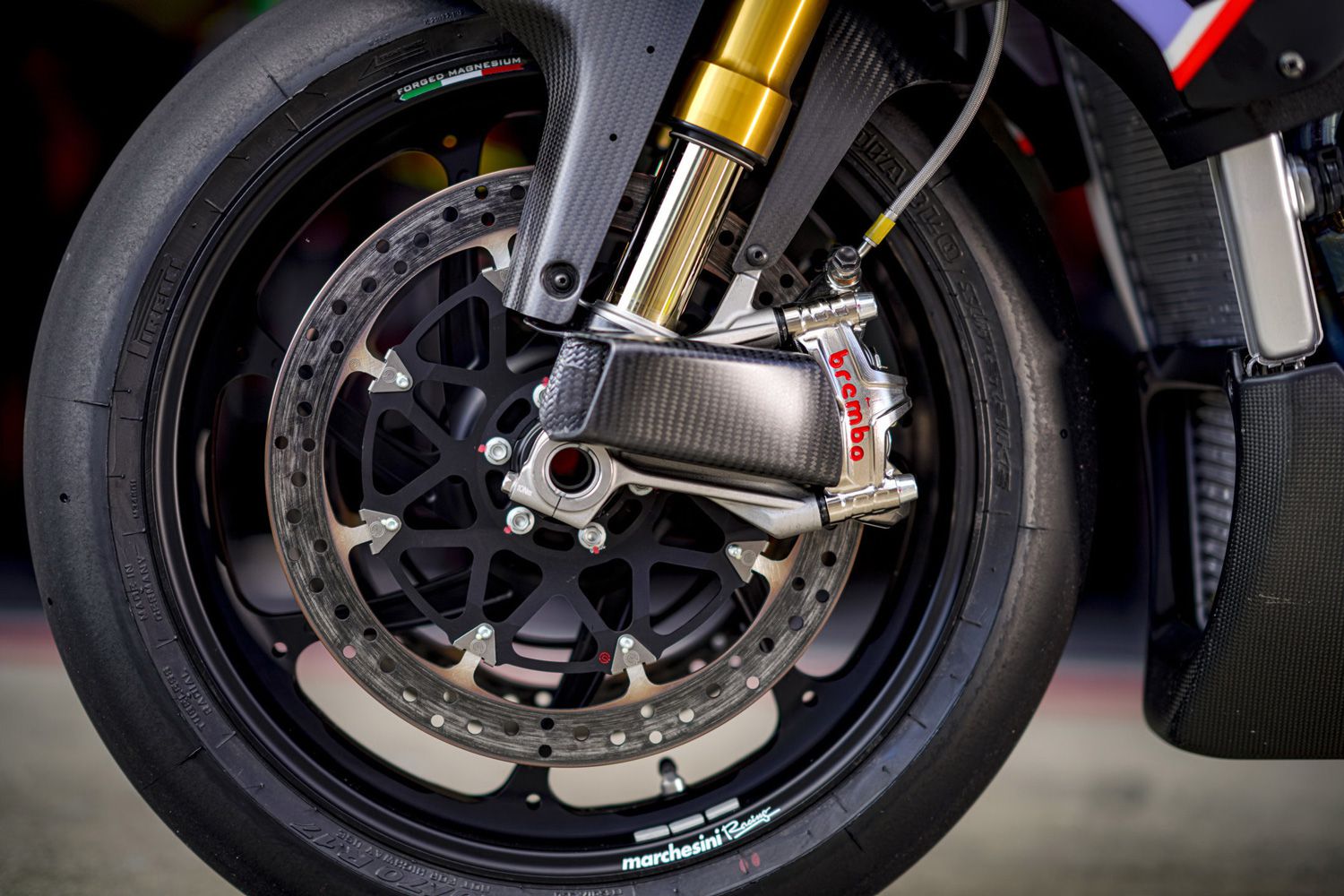 The rest is pure racing, starting from the MotoGP-inspired wings extending from the Tuono top. They’re there no doubt to generate the downforce that the top speed potential demands and to ensure the stability needed when flashing down the highway at past 180 mph, courtesy of this 221 hp capable edition of the ultra-efficient Aprilia narrow-angle V-4. The chassis on this Tuono is the same as the RSV4 X unit, complete with forged magnesium wheels and front 330mm twin rotor Brembo disc brakes and the latest GP4-MS radial calipers and carbon fiber forced-cooling air intakes. Suspension is comprised of Öhlins Smart EC 2.0 electronically active units all around, and as always, an Aprilia electronics suite is at the top of its class, bringing a cluster of selectable mode buttons on the left grip.

Exotic materials like the carbon fiber and titanium used on the Akro exhaust system are designed to keep weight down to the bare minimum. (Aprilia/)

Carbon fiber and machined aluminum elements dominate the Tuono V4 X’s precious finish to ensure a drastic weight reduction, which is down to a claimed 366 pounds, dry. Former SBK racer-now-test-and-development rider Lorenzo Savadori has expressed no doubts about the superior efficiency of the Tuono V4 X even on a racetrack, thanks in part to its less compressed riding posture. After the news spread, the Aprilia MotoGP team riders then wanted to experience the terrific Tuono for themselves, and in the end, all agreed that it was indeed superb. Aprilia had better plan a run of at least 100 units for this hypernaked machine, as they will likely go in one week, even at the stated price of 34,900 euros. If you’re interested, Aprilia’s website will be accepting orders. 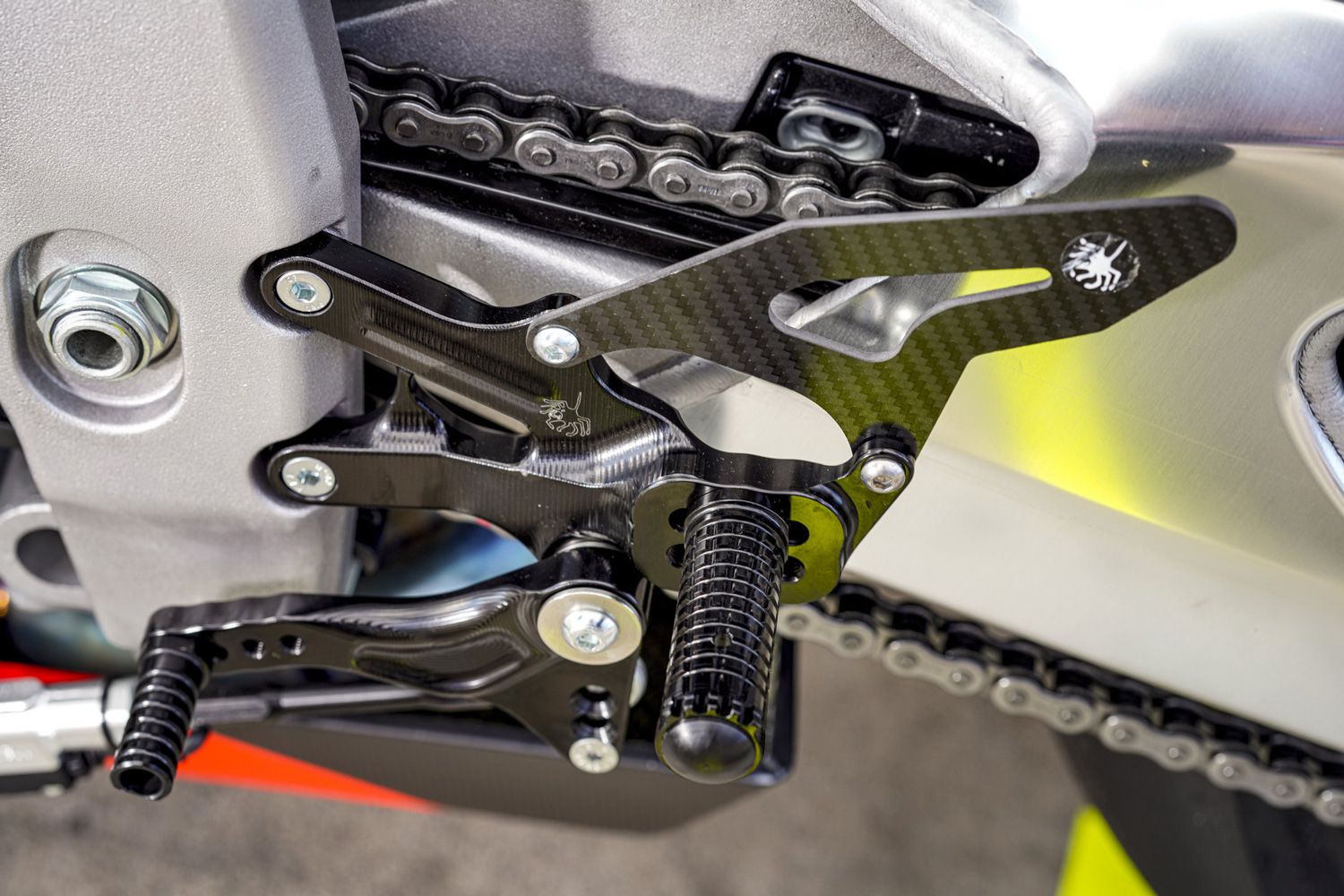 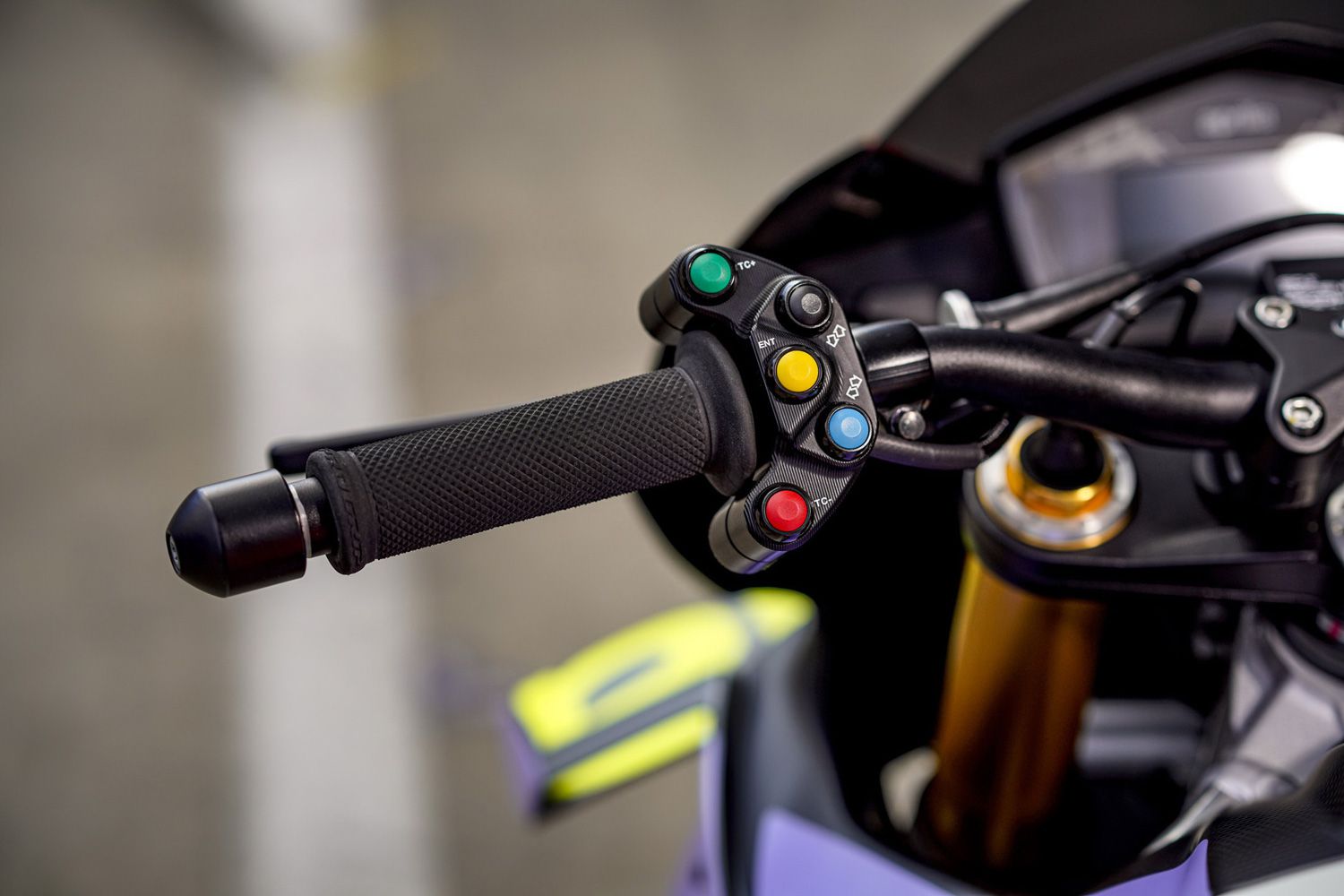 A cluster of selectable mode buttons make their way onto each side of the handlebar. (Aprilia/)

Published in: NewsThe model honors the past while offering modern on- and off-road trekking performance Sixty years after Honda introduced customers to the joys of...
Read more
Previous articleHonda Trail 125 Confirmed For US Market
Next article2021 Honda CBR600RR: How The Specs Stack Up