The Suzuki RE5 is a motorcycle with a liquid-cooled single-rotor Wankel engine, manufactured by Suzuki from 1974 to 1976. Apart from its unusual engine, the RE5 is mostly a conventional roadster, albeit with some peculiar styling details thanks to Italian industrial designer Giorgetto Giugiaro.

Compared to piston engines, rotary engines are smooth, light, compact, and produce high power outputs from relatively small displacements. Although these attributes are highly beneficial to motorcycles, Wankel-engined bikes remain something of a rarity, even though the rotary engine had once been touted as the future of motorcycling.

Suzuki’s RE5 was one of the very few Wankel engined motorcycles ever produced. Other manufacturers whose bikes reached production include; DKW, Norton and Van Veen (who used a derivative of the NSU/Audi engines developed for Citroën). Hercules also produced a Wankel engine motorcycle, the Hercules W-2000, that was the first rotary-powered motorcycle.

All four major Japanese manufacturers had prototypes or plans, but only Suzuki’s RE5 went into production. Yamaha showed their twin-rotor RZ-201 machine at the Tokyo Motor Show in 1972, while Kawasaki tested a prototype as, allegedly, did Honda.

RE5 project chief Shigeyasu Kamiya stated that Suzuki had considered a rotary-powered motorcycle in the mid-1960s. Research and development continued till the end of that decade, leading to the signing of a technical licence with NSU in November 1970, Suzuki being the 20th firm to do so. As a pioneer of rotary development, Suzuki engineers designed and produced numerous special machines for the rotary production process. Of these, ten were particularly notable and included the machine to cut the trochoid block. Suzuki holds twenty patents in plating, as considerable research went into the composite electro-chemical materials (CEM) used to plate the rotor housing. Prototypes testing took two years. The bikes were launched in 1974. Suzuki enlisted astronaut Edgar Mitchell, to introduce and endorse the bike. A number of motorcycle publications were given a lavish week-long opportunity for test riding. This RE5’s warranty was unusually comprehensive, with a full engine replacement for any engine problem within the first 12 months or 12,000 miles (19,000 km).

Despite having only a single rotor, the RE5’s engine was mechanically complex and its numerous subsystems made for a heavy motorcycle. Rotary engines produce a lot of heat, and the RE5 had water- and oil-cooling, and double-skinned exhaust pipes. Ignition was CDI, with two sets of ignition points actuated via vacuum and rpm sensors, to light a solitary NGK spark plug. Three oil reservoirs served the sump, gearbox and total loss tank. Separate oil pumps fed (respectively) the main bearings and the inlet tracts (to lubricate tip seals). The throttle controlled both the primary carburetor butterfly and a second valve in the inlet manifold of the secondary throat (the “port” valve), as well as governing oil supply to the combustion chamber. Five cables in total were moved by the throttle twist grip! The carburetor was similar to that in a rotary-powered car, and was far more complicated than for normal motorcycles.

The RE5 options included: a full touring kit that included a large full fairing (with lockable “glove boxes”) and windscreen, two saddlebags, a large rack and lockable top box. 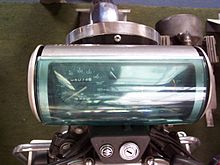 The “tin can” instrument cluster

Suzuki commissioned Italian industrial designer Giorgetto Giugiaro for the RE5 styling. The “tin can” instrument cluster encompassed the usual lights and a low-fuel warning light, total loss oil tank light and digital gear indicator. The tubular “can” motif was also used in the tail light, and spherical indicator lights finished off the “rotary” theme.

The 1976 RE-5 “A” model, with more traditional styling elements

There were two production models of the RE5, the 1975 M model and the 1976 “A” model, which adopted more conventional styling. Many “A” models were converted M models.  The main changes for 1976 included a color changes, GT750-style instruments, blinkers, tail lights and headlight housing. The “B” secondary points for overrun were removed on the “A” model, the chain oiler was removed and a sealed drive chain fitted.  By the end of the production run, a total of some 6,000 RE5 machines had been produced.

The complex B-point system (explained below) gave smooth running on overrun  and some engine braking. Suzuki stopped fitting the B points to the 1976 “A” model, and allegedly had dealers disconnect the system on remaining “M” models. The bikes sometimes exhibited a dead spot or hesitation during acceleration as the carburetor transitioned from primary to secondary throat.  This was due to poor synchronization between the positions of the primary, port and the secondary carburetor throat valves. Some evidence links this to jetting, giving an excessively lean primary mixture.

CDI triggered by two sets of points.  A basic problem with the rotary engine design is a lack of engine braking, partially due to the mass of the rotor. Leaning of the mixture on overrun also contributes to erratic and “lumpy” running. One way to solve the problem is to shut off ignition entirely on overrun, but this leads to excessive contamination of the combustion chamber by unwanted deposits, which can cause the apex seals to stick. Suzuki opted for a compromise by using two sets of ignition points. One set of points ran on a dual lobe cam for normal operation, firing the rotor every face. The other set ran on a single cam on the same shaft for triggering the spark plug on overrun.  The second set (the B points) were triggered by an rpm sensor (the speed relay) and a vacuum switch, which meant that they worked on engine deceleration (high vacuum) and above 1,700 rpm.  This system fired the rotor every second face.  This kept the combustion chambers relatively clean. It also served to smooth the lumpy feel of the bike as RPM reduced on overrun and addressed some issues with backfiring (more correctly, “afterfiring”).  Engine braking is also significantly improved. The B point system was discontinued on the “A”. It is believed that the factory also employed mechanics to visit dealerships and disconnect the B points on any “M” (1975) models still in the showrooms. Suzuki toyed with the idea of two plugs like the Mazda’s, but as with so much of their engineering on this bike, overthought the application, believing that they would require two plugs of different heat ranges. The idea was dropped, and the bike shipped with a single 18 mm conical seat gold palladium spark plug housed in a copper insert in the rotor housing (NGK A9EFV).

BMW 1200GS Engines – How they work and how they’re made

BikeSA is the largest and longest running motorcycle magazine in Africa. Tel : 083 383 9822
Contact us: info@bikesamag.co.za