British-made scramblers are becoming something of a theme in this year’s delayed crop of Hollywood blockbusters. Not only is James Bond set to appear on a Triumph Scrambler 1200 in the forthcoming No Time to Die film, but niche brand CCM Motorcycles has secured a starring role in Marvel’s upcoming Black Widow. 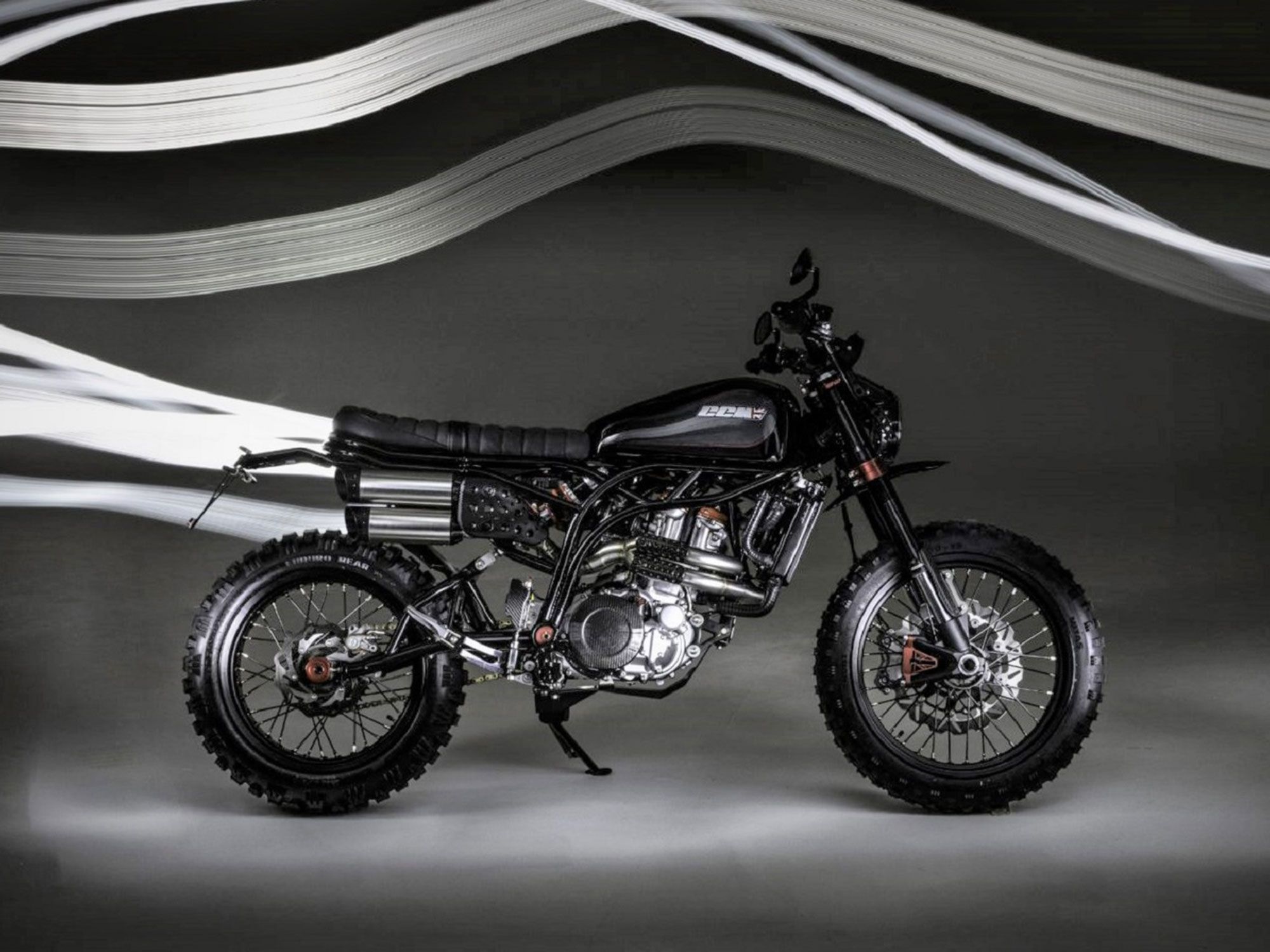 A Spitfire-based scrambler will appear in the upcoming Marvel movie, but CCM is also making this limited-edition version available to the public. (CCM Motorcycles/)

Both movies should have hit theaters months ago but have been postponed due to the pandemic, with the result that the limited-edition production bikes celebrating their silver screen siblings have been ahead of their openings rather than after them. Triumph’s Scrambler 1200 Bond Edition was unveiled back in May, and now CCM has released the Blackout to mark its Black Widow appearance. The Blackout is a higher-spec derivative of the movie bike, featuring an adjustable upside-down fork, hand-welded and powdercoated frame, and lots of carbon fiber. (CCM Motorcycles/)

It turns out that the limited-edition, hand-built CCM Spitfire Scrambler caught the eye of Marvel’s producers, leading to the call to supply a Spitfire to undergo tests for the Black Widow stunt team. The firm says the standard bike was more than capable of standing up to the beating it met at the stunt riders’ hands—eliminating the need for the dressed-up dirt bike doubles that Hollywood usually resorts to when the going gets tough. CCM’s Spitfire Scrambler came out more than two years ago (and sold out quickly), but you can see the similarities between it and the Blackout. (CCM Motorcycles/)

The successful audition led to CCM supplying six bikes to the moviemakers, and preview stills have already emerged showing Scarlett Johansson’s title character aboard a tatty-looking Spitfire. It’s a grittier look than the futuristic preproduction Harley-Davidson LiveWire that the character rode in Avengers: Age of Ultron, and as a result the limited-production spin-off isn’t a part-for-part clone. Instead CCM has built a high-spec Spitfire derivative, labeled Blackout, to mark its appearance in the movie. Powering the lightweight machine is a Husky TE 630-based single-cylinder engine stuffed into a T45 steel trellis frame. (CCM Motorcycles/)

The Spitfire—named after the use of the same T45 steel in the frame that was used during the production of the WWII fighter plane of the same name—is the basis of the Blackout, which gains a blacked-out look to match its title. The frame is powdercoated in metallic black, and the tank and carbon fiber nose fairing get the same finish, with the addition of a gray side panel and red pinstripes. The red is mirrored in the anodized red triple clamps, red rear spring, and the cam covers of the Husqvarna TE 630-based single-cylinder engine. That engine puts out about 60 hp, breathing through a new slash-cut, stacked exhaust, and the bike’s lightweight design and liberal use of carbon fiber mean it only weighs around 306 pounds dry (or 7 pounds lighter than the Scrambler that preceded it). 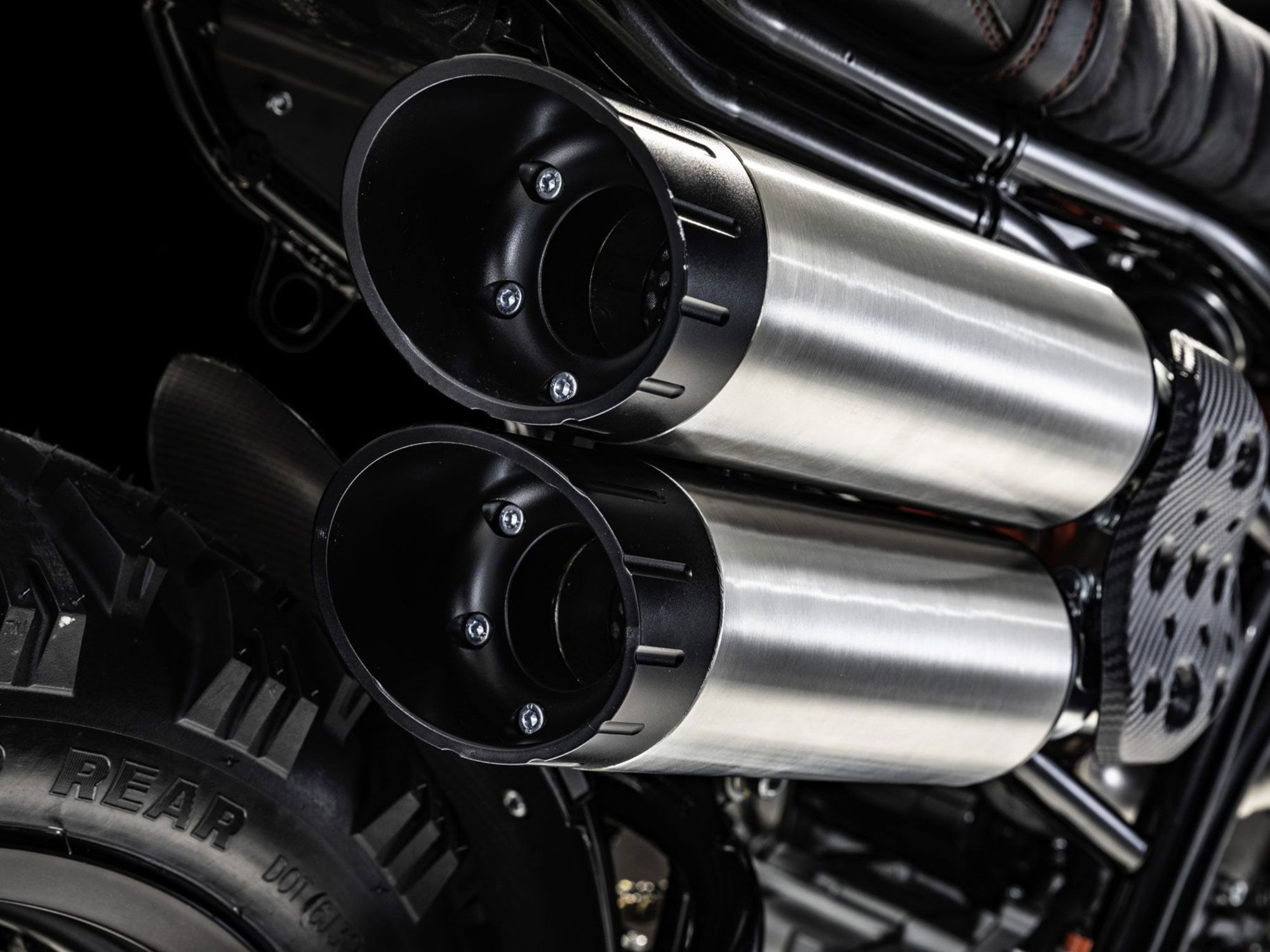 The straight-cut underseat mufflers have evolved into more refined and slash-cut versions that are now stacked instead. (CCM Motorcycles/)

Who is CCM? The firm, based in Bolton, Lancashire, was founded back in 1971 as Clews Competition Motorcycles by motocross rider Alan Clews, who saw decent results in the 500cc class of the World Motocross Championship in the mid-‘70s. In the 1980s, the firm’s bikes were exported to the USA and sold under the Can-Am brand. CCM also built the Armstrong MT500 military bikes that were later developed into the Harley-Davidson MT350, and still makes the MT230 police and military bikes used by defense and security forces around the world. 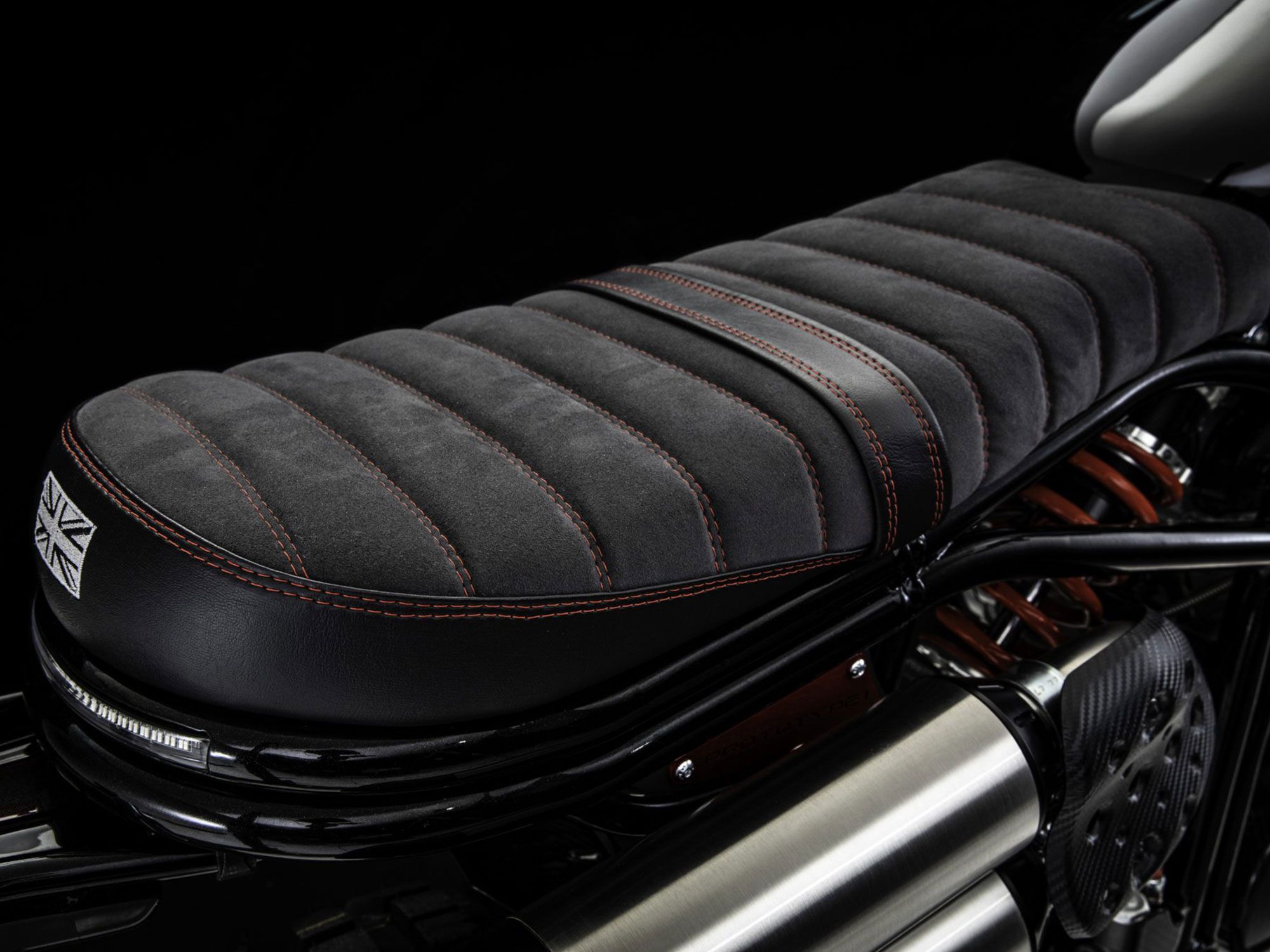 The cockpit features upswept bars and special Skunkwerx badging to denote the bike’s provenance. The 3.6-gallon fuel tank keeps a similar profile to the original Scrambler version but takes on a unique black and gray paint job. (CCM Motorcycles/) 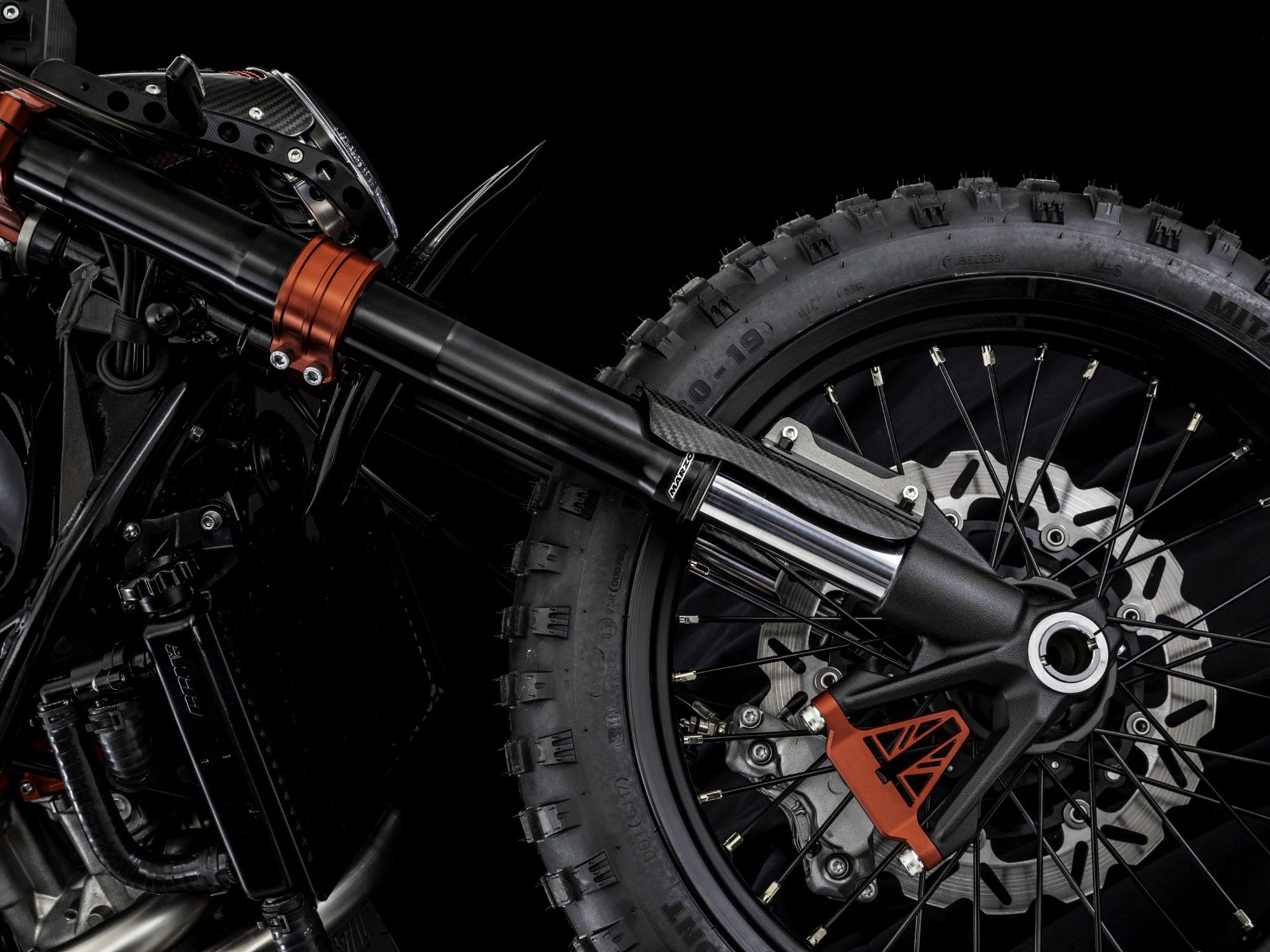 While the Spitfire and its derivatives are currently only sold in the UK, the company is working on a Euro 5-compliant version to gain full European certification and open the doors to international markets. 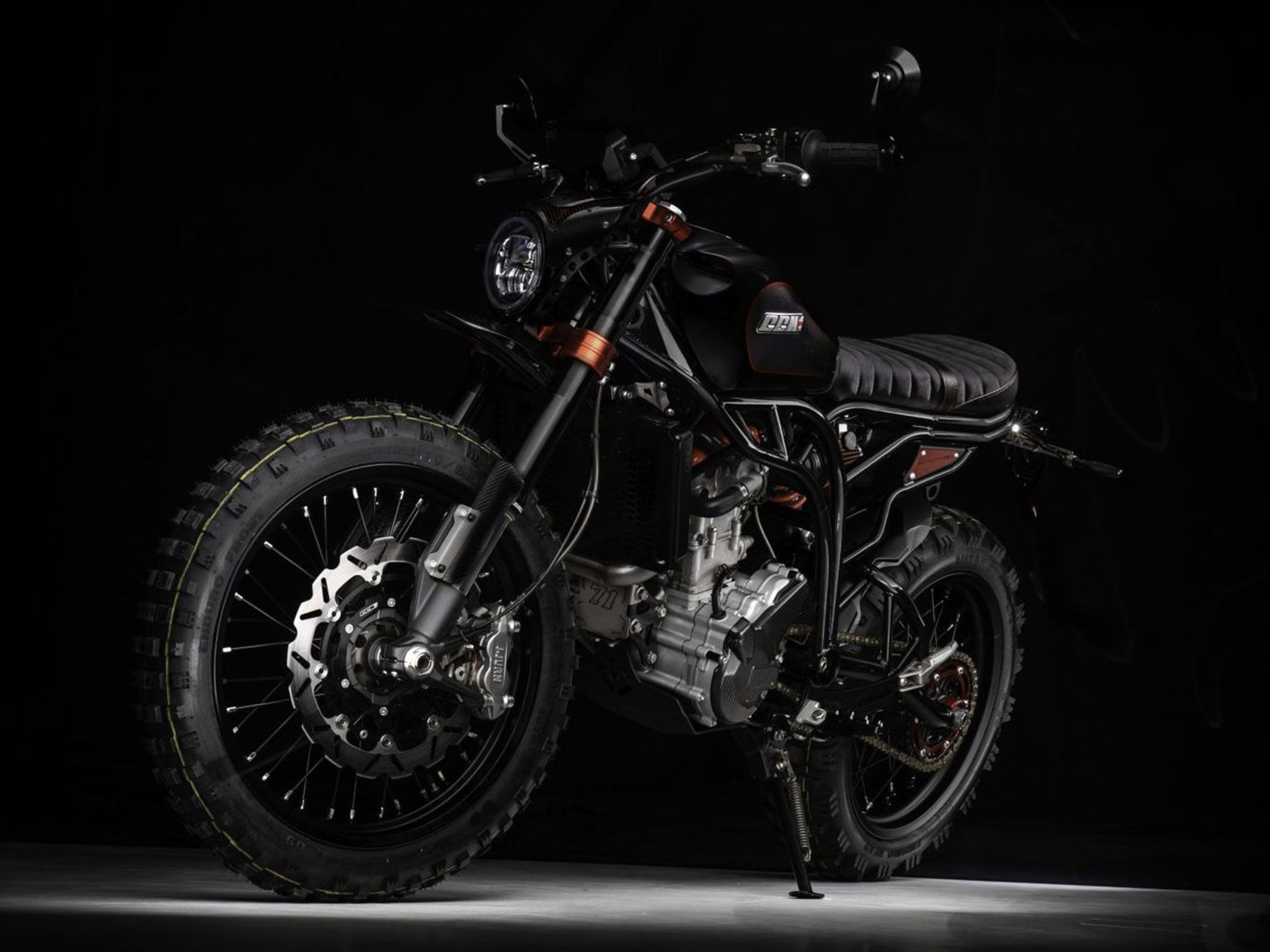 The company plans to expand its footprint to more markets once a Euro 5 version passes muster. (CCM Motorcycles/)