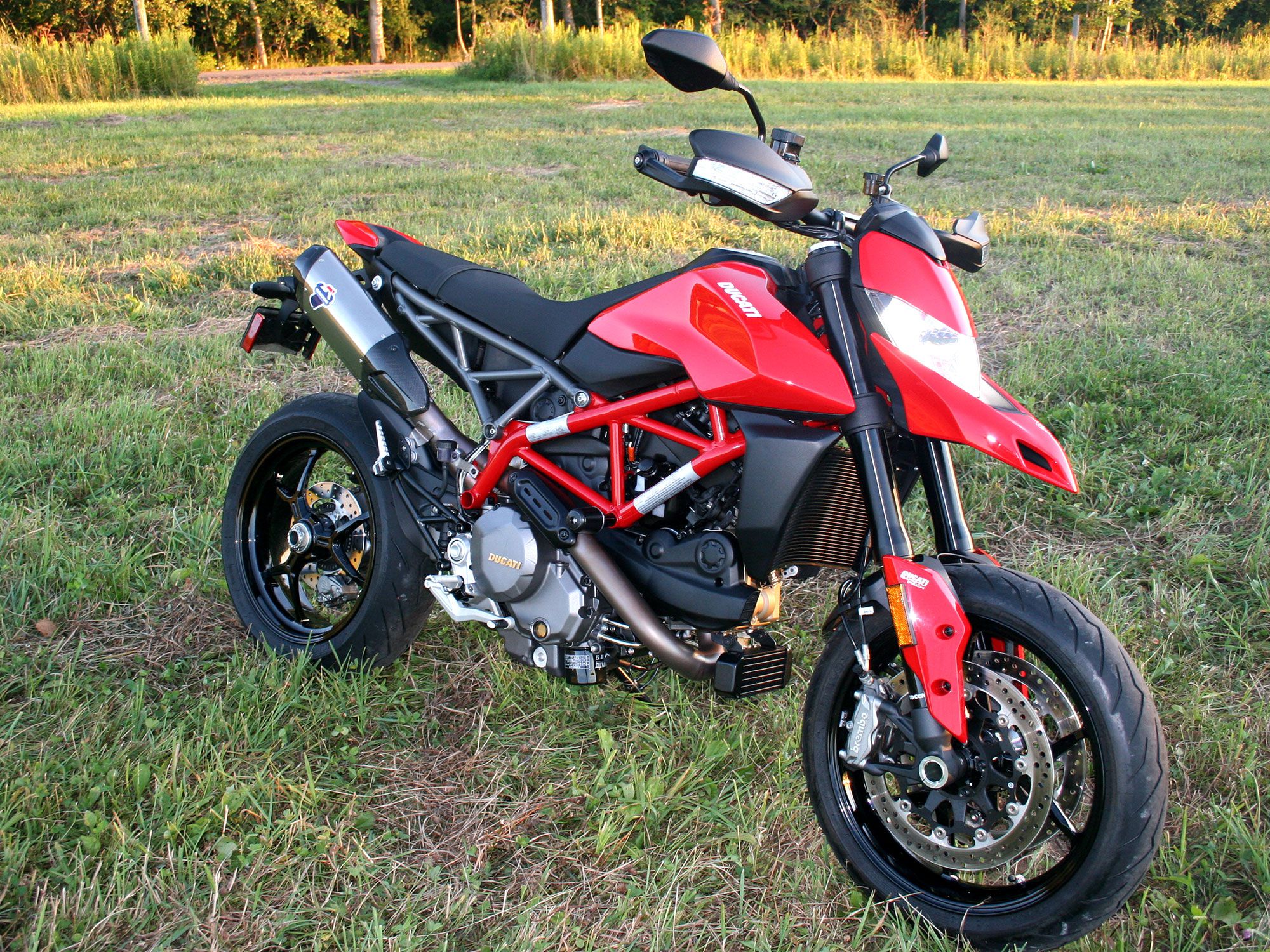 Motorcyclists sometimes treat exhaust systems and other aftermarket accessories as if they were more like expensive jewelry than performance parts. Like many of us, I’ve been known to fall under the spell of carbon fiber, titanium, and billet aluminum—not to mention a sweet-sounding exhaust note. But if you want to know the value of hardware, spend some time with your mechanic.

Earlier this summer, I called my mechanic Steve Saucier to discuss options for improving throttle response and drivability on my 2019 Ducati Hypermotard 950. I met Steve back when he owned European Cycle Services in Middletown, New York, an independent shop with a reputation for being one of the best garages on the East Coast for race prepping, restoring, and working on Ducatis. Several years back, Steve merged his shop with Hudson Valley Motorcycles (HVMC) in Ossining, New York, where he’s currently the service manager. 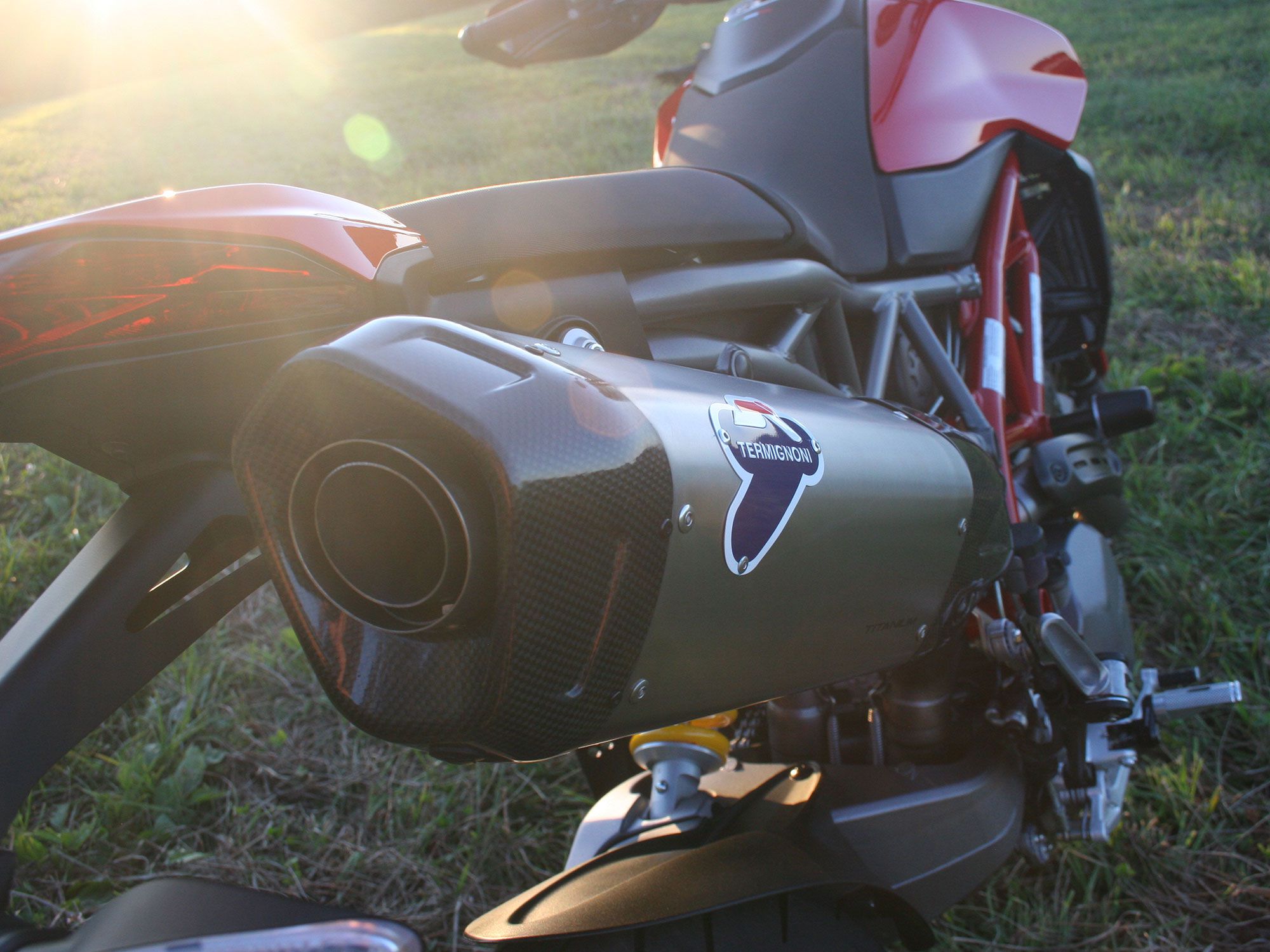 HVMC’s been around since 1966 when Richard Alexander Sr. opened it down the street from its current location. Today, it’s a Ducati, Kawasaki, Suzuki, and Energica dealer and is still owned and operated by the Alexander family. If you’re a race fan, you might recognize the name. Richie was the 1998 AMA 750 Supersport champion and his nephew Corey currently races in the MotoAmerica Stock1000 and Superbike classes on an HVMC/Iconic Motorbikes-sponsored Kawasaki prepped by Graves Motorsports.

The astute Egan-ite will at once recognize that HVMC meets two of the esteemed author’s criteria for dealership excellence (“Dealers,” October 1991): 1) it supports and is deeply involved in racing (on a high level at that), and 2) sells at least one line of non-Japanese motorcycle. The only aspect where it falls short on Egan’s rubric is its lack of free coffee. Fortunately, there’s an excellent diner next door. 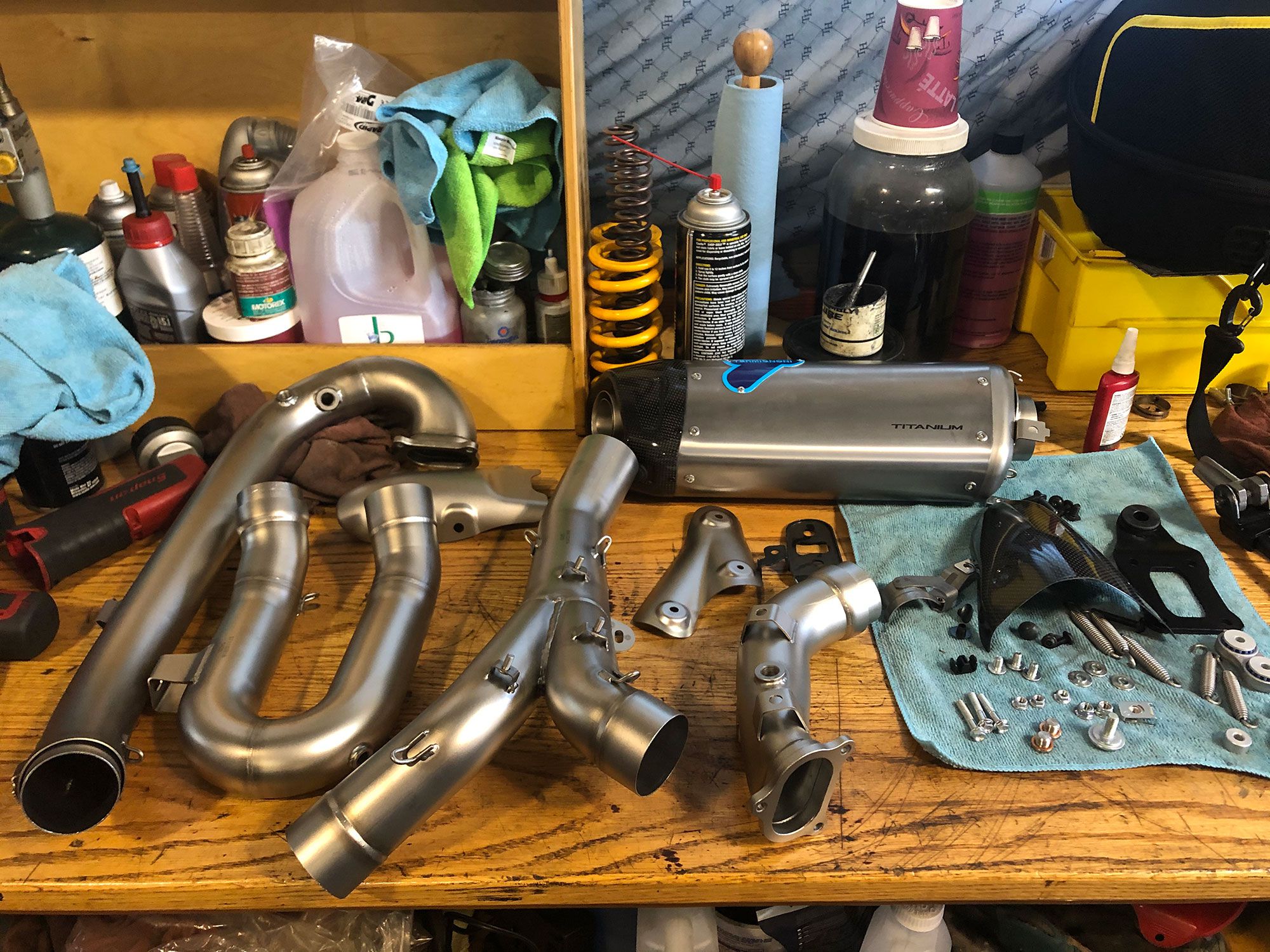 After talking with Steve and my friend Alex at Ducati, I settled on installing a Termignoni full system from Ducati’s performance catalog ($3,009). Its titanium-sleeved can, carbon fiber end caps, and stainless steel pipes look great, but most importantly, the system includes a dedicated ECU map. It also ditches the catalytic converter and exhaust valve, which turns my Hyper into a track-only bike. That should encourage me to get to the track more often. Purchase also includes a two-year warranty.

The shop’s been slammed lately, but Steve did me a huge favor, coming in on his day off to get the exhaust installed. While he was working, I poked around the garage. Like many motorcycle shops, there’s the typical mix of sacred metal and corroding junk. The obviously sacred: a 0-mile 1199 Panigale R, still shrouded in its packing material; a 1979 900 Super Sport, deep into a restoration; and a clean ’90s 900 Supersport. 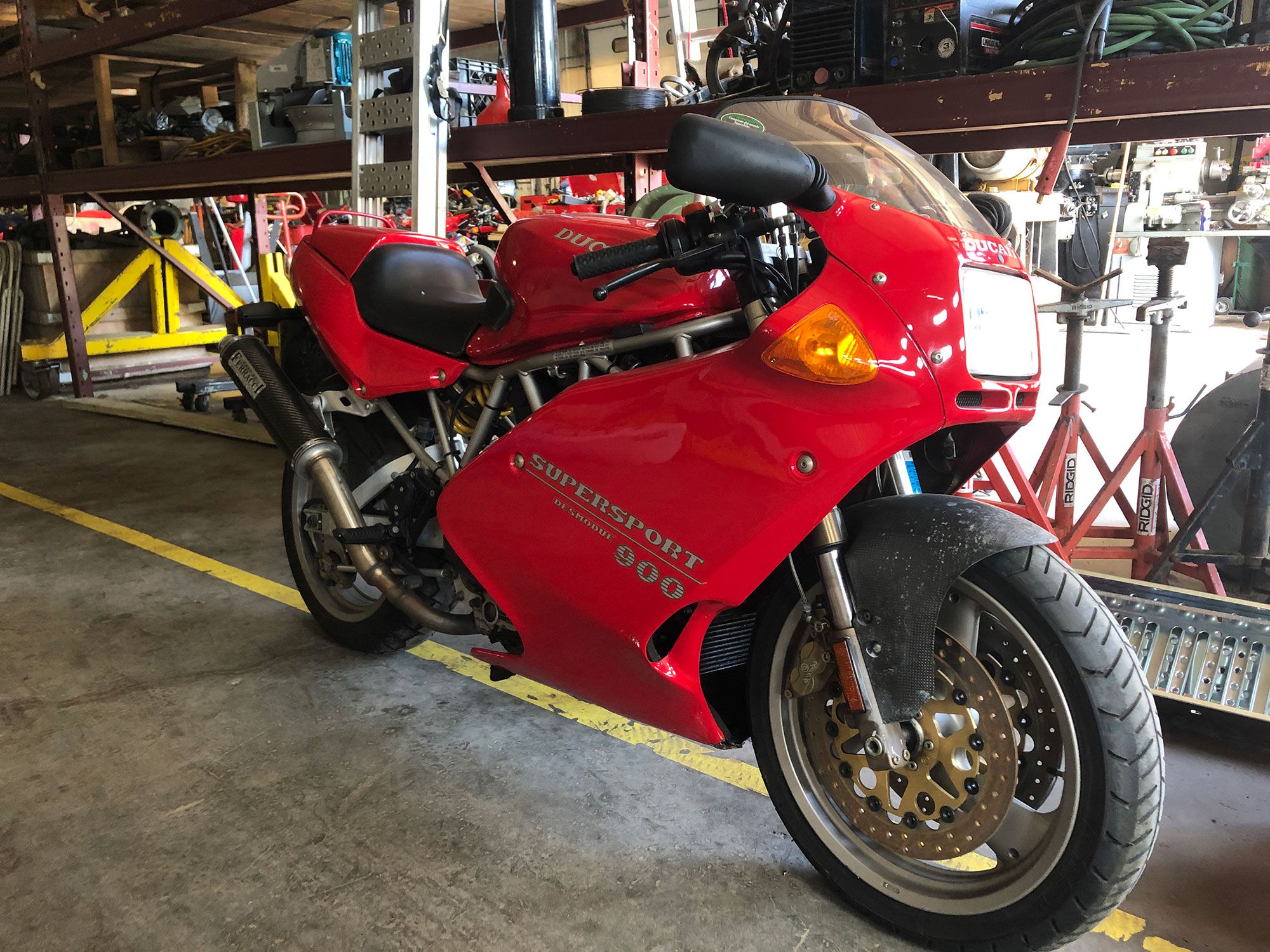 Each of these bikes has its associated historical drama, its own cast of legendary characters. The 900 Super Sport has Ing. Taglioni and a thread connecting it to Paul Smart and the Imola bike. The later Supersport variant has Miguel Galluzzi and the whole Cagiva era that saw Ducati hit its stride on the world stage. The Panigale R has its own legacy simply because it’s a homologation-spec superbike. The enthusiast can’t fail to see the links between all of these bikes, particularly as the eye wanders from the variously shared Brembo, Marchesini, Marzocchi, and Termignoni logos pasted on their respective parts.

But for the enthusiast, what most would consider junk—a pile of bent trellis frames, a dented three-spoke Marchesini wheel—can also be endowed with significance by proxy, without regard for their usefulness. 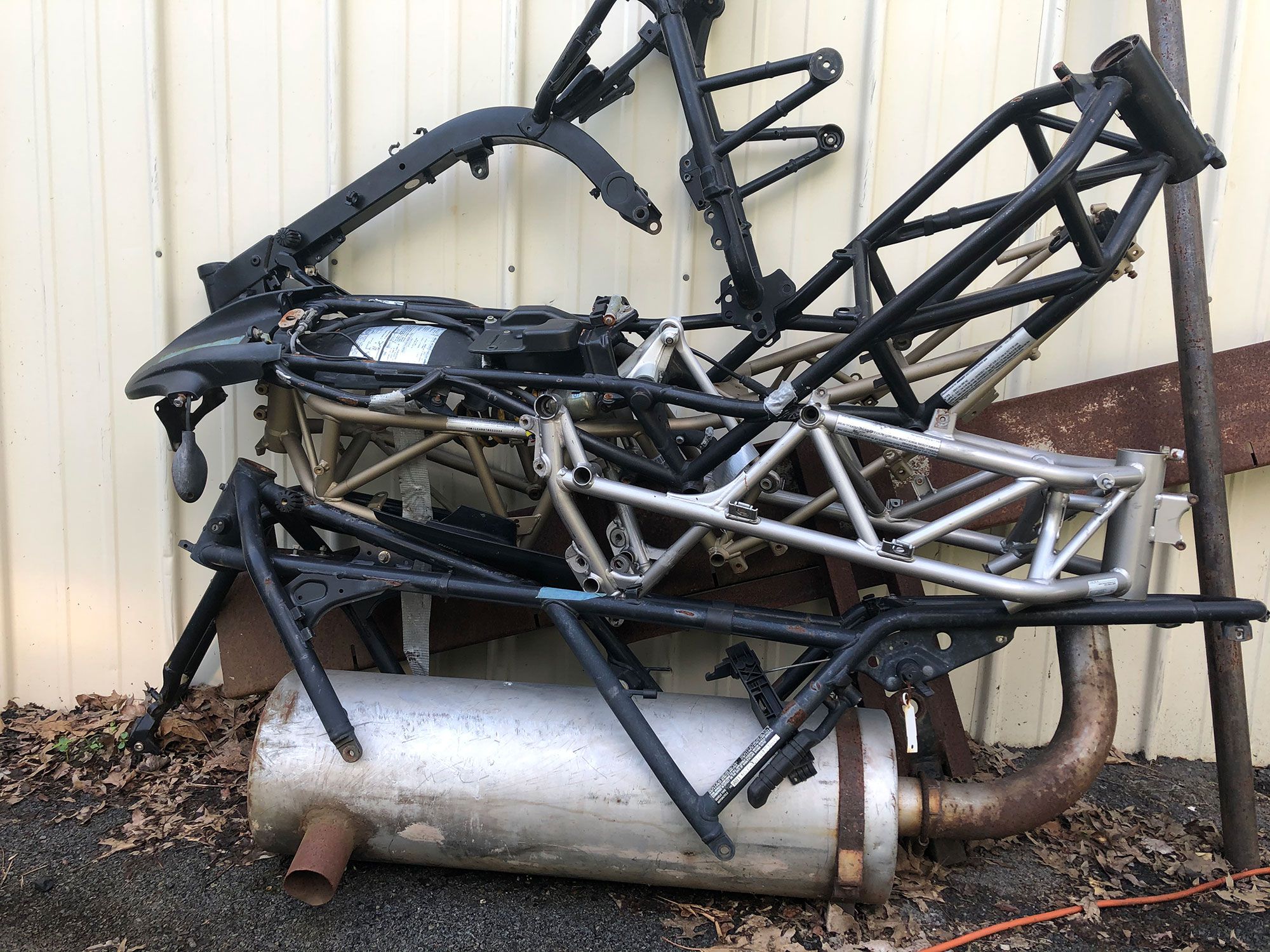 There’s a danger in considering an object for what it can be made to mean, rather than valuing it purely for what it is. We can’t help but be let down for wanting it to mean more than it can. While seeing history in a motorcycle model is more an intellectual pursuit than anything else, there’s always the enthusiast’s temptation to fetishize three-dimensional parts.

In contrast to my reverential prostrations, Steve, having worked on motorcycles for decades, is in no way moved by sparkly bits or otherwise significant motorcycles. Considering the motorcycle in its own right, and letting history get out of its own way, is the best antidote. So to properly appreciate an exhaust system is to simply let it be an exhaust system.

Back to the Hyper. Steve dyno’d my bike with both exhaust configurations, and peak power and torque figures are virtually unchanged. It’s a testament to the effort of the Ducati engineers who were able to achieve roughly equivalent peak performance numbers from the stock exhaust/ECU map and the competition-only setup—the latter of which isn’t required to comply with current emissions standards. That our dyno runs didn’t reveal the 3-percent improvement in peak horsepower or the 2-percent boost in peak torque that Ducati claims is a nonissue for me. I was never after more power. I was in search of improved throttle response. 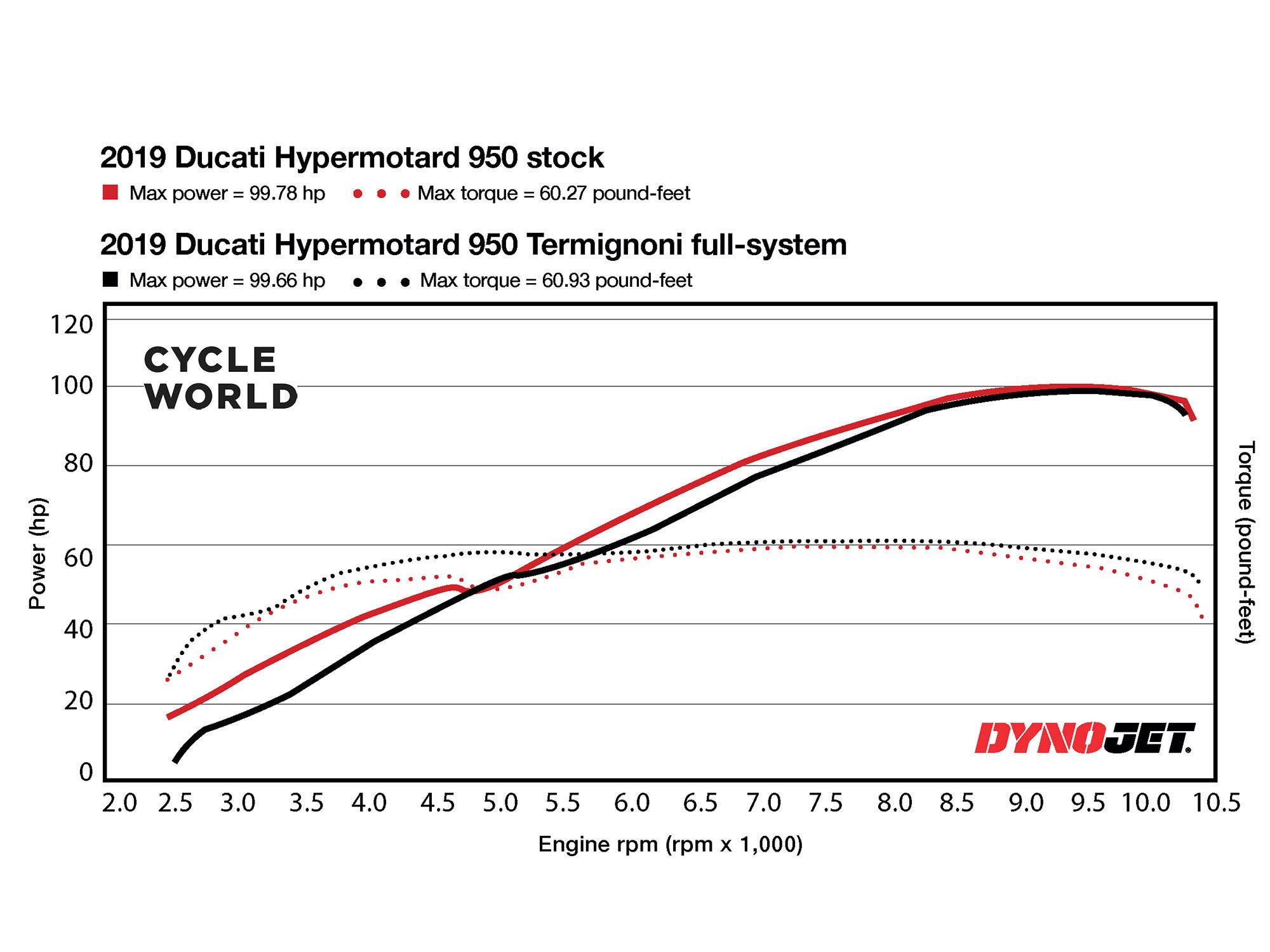 The before-after dyno chart shows that the Termignoni system smooths out the dip in horsepower around 4,750 rpm, but doesn’t increase power along the curve. However, the graph shows that it does improve torque everywhere. For what it’s worth, Ducati insists that with its dyno, peak power output is increased. (Seth Richards/)

In stock trim, the throttle felt—there’s no other way to put it—electronic. It is, of course, a ride-by-wire throttle, but that’s not what I’m getting at. There was a remoteness and artificiality to throttle feel that took my mind off the road. It was a little snatchy below 4,000 rpm, and rolling off the throttle at any rpm was too abrupt. With the new exhaust, I can lug the engine and it pulls much more cleanly from low rpm. Throttle delivery is smooth, controlled, and more neutral, though still characterized by a sprightliness derived from relatively lightweight internals (crankshaft, etc.). 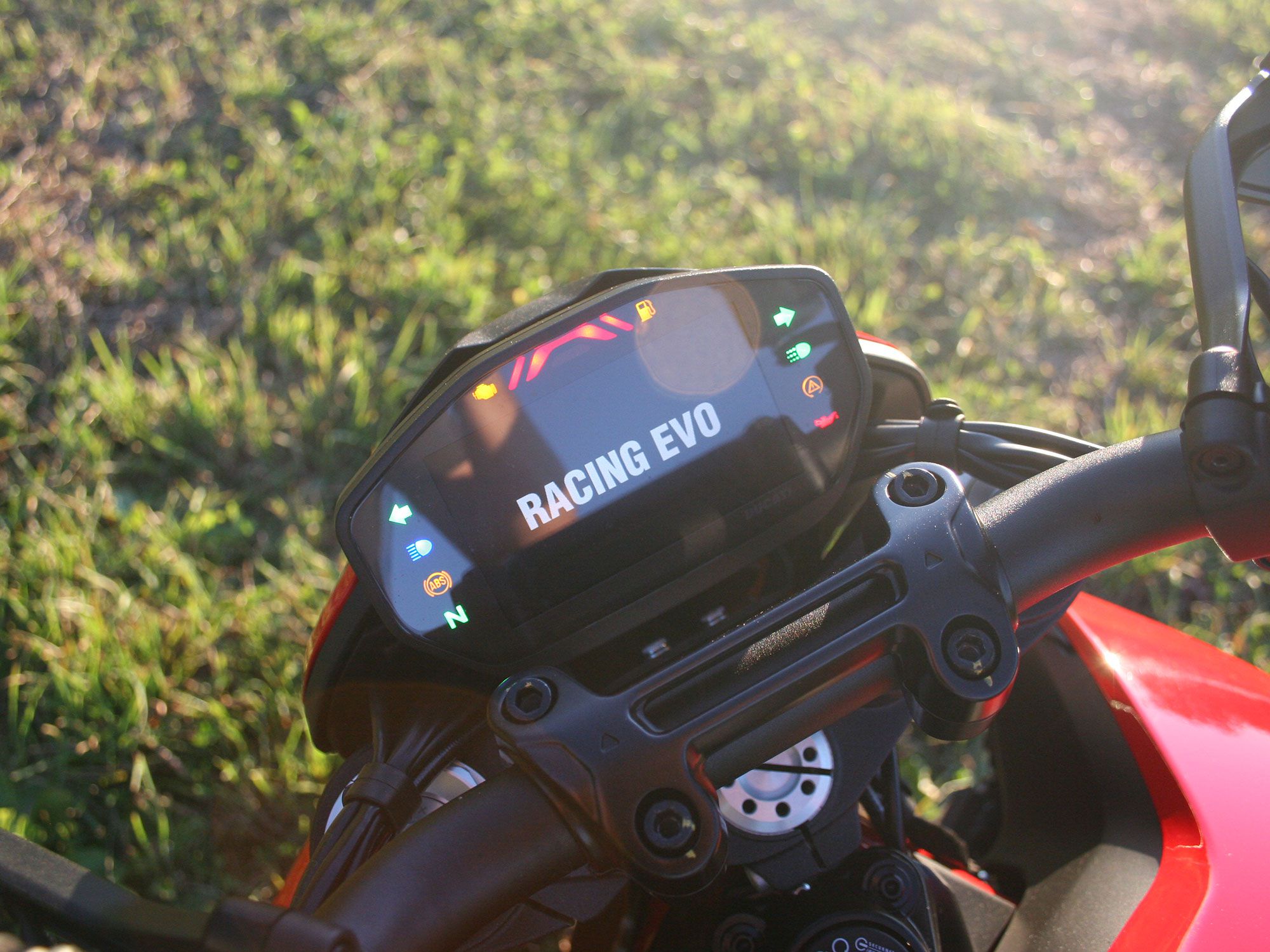 Ducati claims the exhaust weighs 8.5 pounds less than the stock setup, which, unfortunately, we’ll have to take its word on. Like many of us, I’ve been stuck at home, and I haven’t had an accurate means by which to get the weight on both setups. My apologies. I should note, however, that in general it’s very difficult to discern any change in handling resulting from the loss of a few pounds, unless that weight has come off something with a large gyroscopic effect, like wheels.

Anyway, as Steve said, “Now it sounds like a Ducati.”

He’s right. It doesn’t sound like a twin-cylinder Ducati superbike; there’s something, well, motard-y about it. Like a single on steroids. It’s more shouty than a slow-revving desmoquattro, for instance, and less metallic-ly snarly than the Panigale’s superquadro (which has chain-, rather than belt-driven, cams). I’ve ridden it with and without the decibel killer and have settled on keeping it inserted for the sake of my eardrums (even with earplugs in). The exhaust changes the resonant properties of the bike too, so now I can feel the engine through the seat in all its robustness. 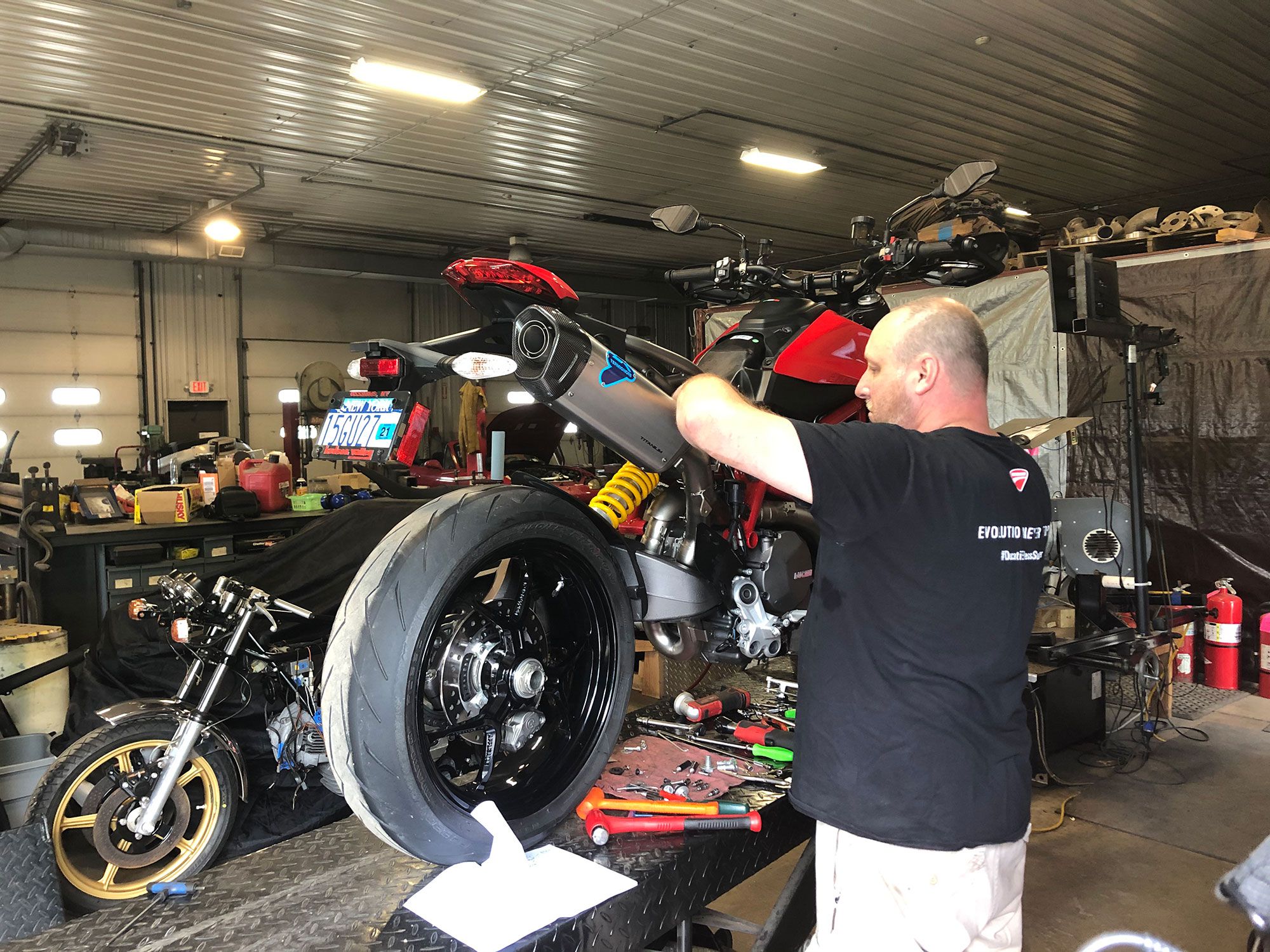 Ducati and Termignoni worked in tandem to make the Hypermotard’s design work equally well with both the stock twin undertail exhausts and the single high-slung Termi system. The stock number plate-like panels out back are 86′d with the Termi in place, which shows off the shapely subframe, and the different pipe routing exposes the inside of the single-sided swingarm between the rear wheel and the swingarm pivot. 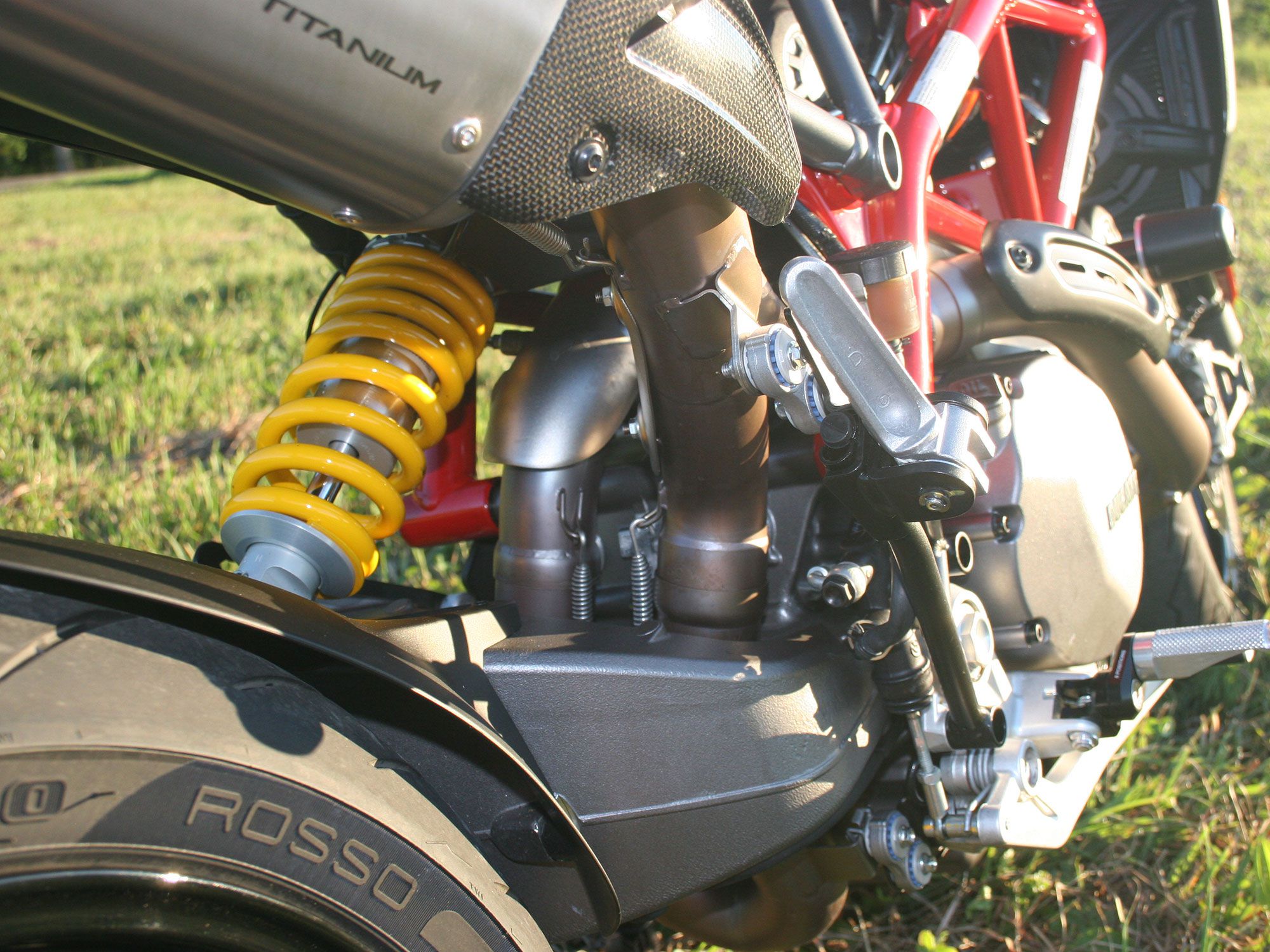 The way the stock system routed the headers behind the right footpeg, reminiscent of my 996, looked good but the Termi system enhances the physical sparseness of the bike. Photographs don’t really do it justice. The quality of the titanium canister and the precision of the welds on the exhaust pipes showcase the craftsmanship you’d expect from Termignoni. But here I am segueing into hardware lust again. 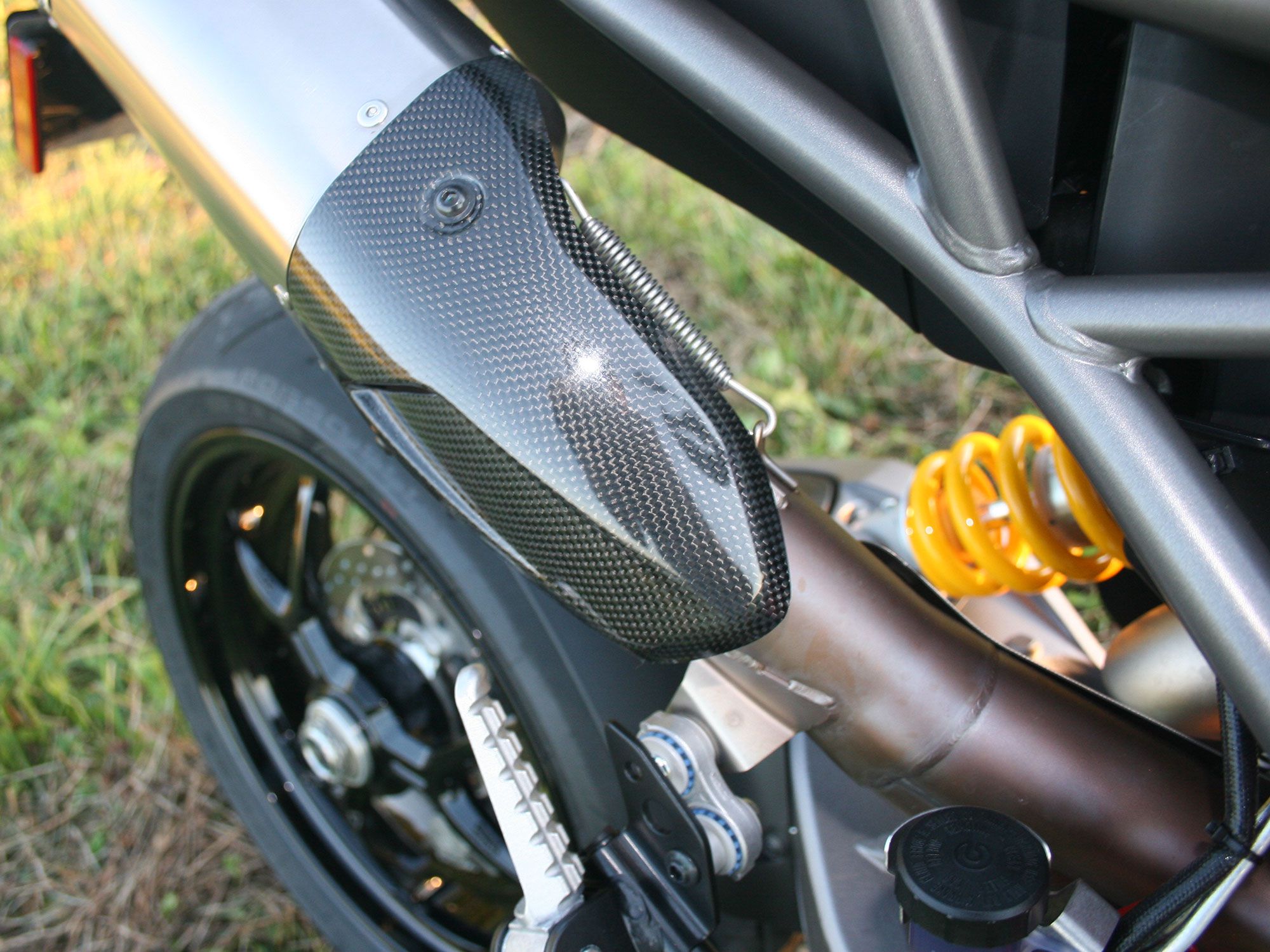 A motorcycle’s appeal is often based on a subjective preference or feeling, an attraction to a particular exhaust note, an association with a legendary racer, or just the basic draw of the motorcycle as a whole. But hanging out with Steve for the day reminded me that a motorcycle is, objectively, only as good as its performance. Function trumps form. A mechanic who’s intimately familiar with the inner workings of the machine is far less tempted to rhapsodize about some oblique value that captivates a hack with a keyboard.

Ultimately, the Hypermotard 950′s Termignoni full system cleans up throttle response, sounds bigger, changes up the bike’s style, and weighs less than the stock setup. So, what that means—or rather, what it is—is a good exhaust system.

Published in: GearWolfman Luggage revamped their entire 2020 lineup to be fully waterproof and in doing so didn’t leave out their smallest bag, the...
Read more
Previous article2020 KTM 200 Duke First Look
Next articleProblems With Old Carburetors