I have to remind myself that in the present era it’s unnecessary for anyone to know much about internal combustion engines. Throw a leg over, start up, and ride off. All the same, there’s fascinating stuff going on inside your engine. Given a degree of curiosity, knowing more about it can expand your riding experience.

A classic Triumph parallel twin of the 1960s had a simple ignition system whose spark timing was controlled by a centrifugal advance unit, located on the end of the exhaust camshaft. Its purpose was to retard the spark during kickstarting so that the engine could not kick back on the normal running timing of about 36 degrees before top dead center (BTDC). With timing retarded to around TDC, kickback becomes very unlikely. Once the engine fired and began to run, spark timing remained close to TDC, but as the rider opened the throttle to ride away, the centrifugal advance unit advanced the spark timing to its normal 36 degrees, where it remained throughout the ride.

What guaranteed that 36 BTDC would be the correct timing at 2,000 rpm, at 6,000 rpm, and over the range of possible throttle openings? Nothing did! In fact, an engine’s spark timing for best torque is constantly changing, but because there was no easy way to provide that in 1965, they compromised at a fixed 36 degrees.

Car owners wanted minimum fuel consumption, so engineers gave auto engines a vacuum advance system. By linking spark timing to intake manifold vacuum, they were able to safely advance the timing during operation at high manifold vacuum, because they knew that the less-dense mixture of high vacuum operation burns more slowly than does the denser mixture of full-throttle operation. Without vacuum advance, the slower combustion at highway cruise would delay the occurrence of peak combustion pressure, thereby getting less “push” out of the hot gas.

When curious engineers made it their business to ask why, they found that best results come when peak pressure occurs just as the piston leaves its longish “dwell” around TDC, and starts downward on its power stroke. That is always close to 11 degrees ATDC. A vacuum advance system compensated for the slower combustion during high manifold vacuum by advancing the spark a bit. Mileage improved.

Control was not digital, as it is today, but was analog, in the form of a thin fabric-and-rubber diaphragm with atmospheric pressure on one side and manifold vacuum on the other, linked to rotate the points plate inside the ignition distributor, and provided with a spring to make spark retard the default condition. When you finished accelerating up the on-ramp and settled into freeway cruise, the resulting high manifold vacuum compressed the spring and advanced the timing.

What this shows us is that there is no single best ignition timing for all conditions. On the contrary, as engine rpm and throttle opening vary, so does combustion flame speed, tending to move the point of peak combustion pressure all over the map. Some of the variables are:

A) Mixture density. The more closely packed the fuel and oxygen molecules are in the mixture, the more energy is released in a millimeter of flame travel, and the more quickly that energy sets alight the mixture ahead.

C) Mixture strength. Because the roughly 12.5-to-1 air-fuel mixture that gives maximum heat release and maximum power also gives fastest flame propagation, mixtures leaner or richer than that give slower flame speeds. Operation on lean mixtures is common in our emissions era, resulting in lower flame speed. To achieve peak combustion pressure at the desired 11 degrees ATDC with such a slower-burning mixture, spark timing must be advanced.

Achieving the above was just too complicated for 1965 technology, so bikes of that period had simple fixed ignition timing. With the coming of emissions limits and cheap semiconductor electronics, a combination of sensors, computer control, and electronic timing maps is now able to automatically give engines the spark timing that gives maximum push, under all conditions. 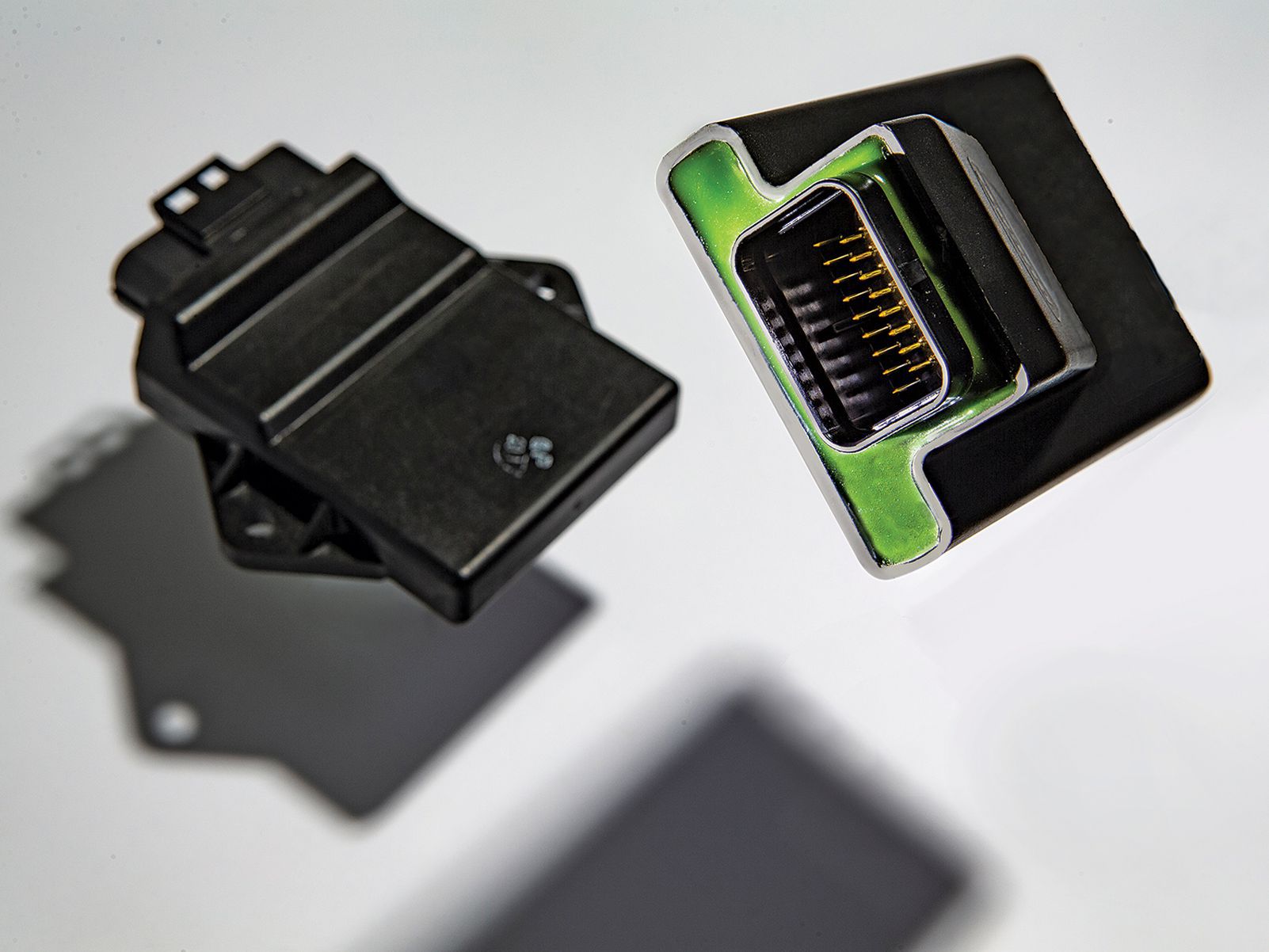 I learned about this at first hand while trying to get the best from two-stroke racing engines in the 1970s. Those two-strokes were equipped with resonant exhaust systems that began their pumping action at about 9,800 rpm, gave peak effect at 11,000, and were all done at 12,000. Below 9,800 they relied upon the much weaker pumping action of their crankcases, acting as scavenge pumps.

But in the handbook that came with the 1977 Yamaha TZ250D it gave only one ignition timing—20 degrees BTDC under all conditions.

How could that be right? I decided to make a test. We knew from the first day of practice what our sixth gear rpm on the Daytona banking was. For the next day’s first practice I retarded the timing to 18 degrees and was rewarded by a 300-rpm increase in top gear rpm. To put it mildly, I was delighted. Now I pulled the timing back another 2 degrees and the rider reported another gain of 300 revs—same gearing. It was like free horsepower.

With the stock timing spec, peak combustion pressure was occurring too soon, holding flaming gases between the head and the piston crown near TDC too long, allowing heat loss. The result was less pressure just as the piston really started to move after 11 ATDC. By retarding the timing 2 degrees, and then 2 more, I was bringing peak combustion pressure closer to that ideal 11 ATDC—and the bike responded by moving faster.

Since that time I have on several occasions seen 250 tuners trying everything they can think of to get away with a quarter-degree more ignition timing, because they firmly believed that was the direction in which more power lay. My experience had been the direct opposite—that the bike often went faster on less timing.

By 1981, Yamaha was providing its production roadrace engines with electronically variable ignition timing, with timing data stored on a digital rpm-versus-timing map that had been made empirically on a dyno, by sweeping the timing back and forth every 50 rpm to find the timing that gave the most torque. By comparison, my Daytona experiment in timing retard had been crude, but it showed me the way. More modern maps are 3-D, with throttle opening added to the two other variables (the 21st-century equivalent of vacuum advance).

In a file cabinet here is a timing map from an early 1980s TZ500. Two points from it tell the story. Down at 6,000 rpm, far below the onset of exhaust pipe action, timing is 36 BTDC. Up at 12,000, where pipe pumping is strong and in-cylinder mixture density and turbulence high, best torque comes at 16 BTDC—a full 20 degrees of ignition retard.

Modern mapped ignition timing systems take note of every variation in an engine’s torque curve, two-stroke or four-stroke, resulting in an ignition timing curve that is almost the inverse of the torque. Where torque is high, so is mixture density, requiring less timing. In a torque dip, mixture density and flame speed are a bit lower, so timing advances a bit. Every feature that contributes to torque—intake and exhaust system lengths, airbox resonance, and cam effects—alters the best-torque ignition timing requirement.

When I’ve told this story to others, the result has often been “Yeah, but.” with the most common objection being that ignition has to advance as an engine revs up, because the higher it revs, the less time there is for combustion to occur. Sorry, gotta refer you to a Honda SAE paper of the mid-1960s in which they report discovering that flame speed in four-strokes pretty much stays in step with engine revs—at least through 27,000 rpm, which was as high as their research went at that time. Sure, there’s less time for combustion at high revs, but there’s also less time for turbulence decay that otherwise would slow combustion speed.

It all comes down to the dyno, which is where modern ignition timing maps are made.