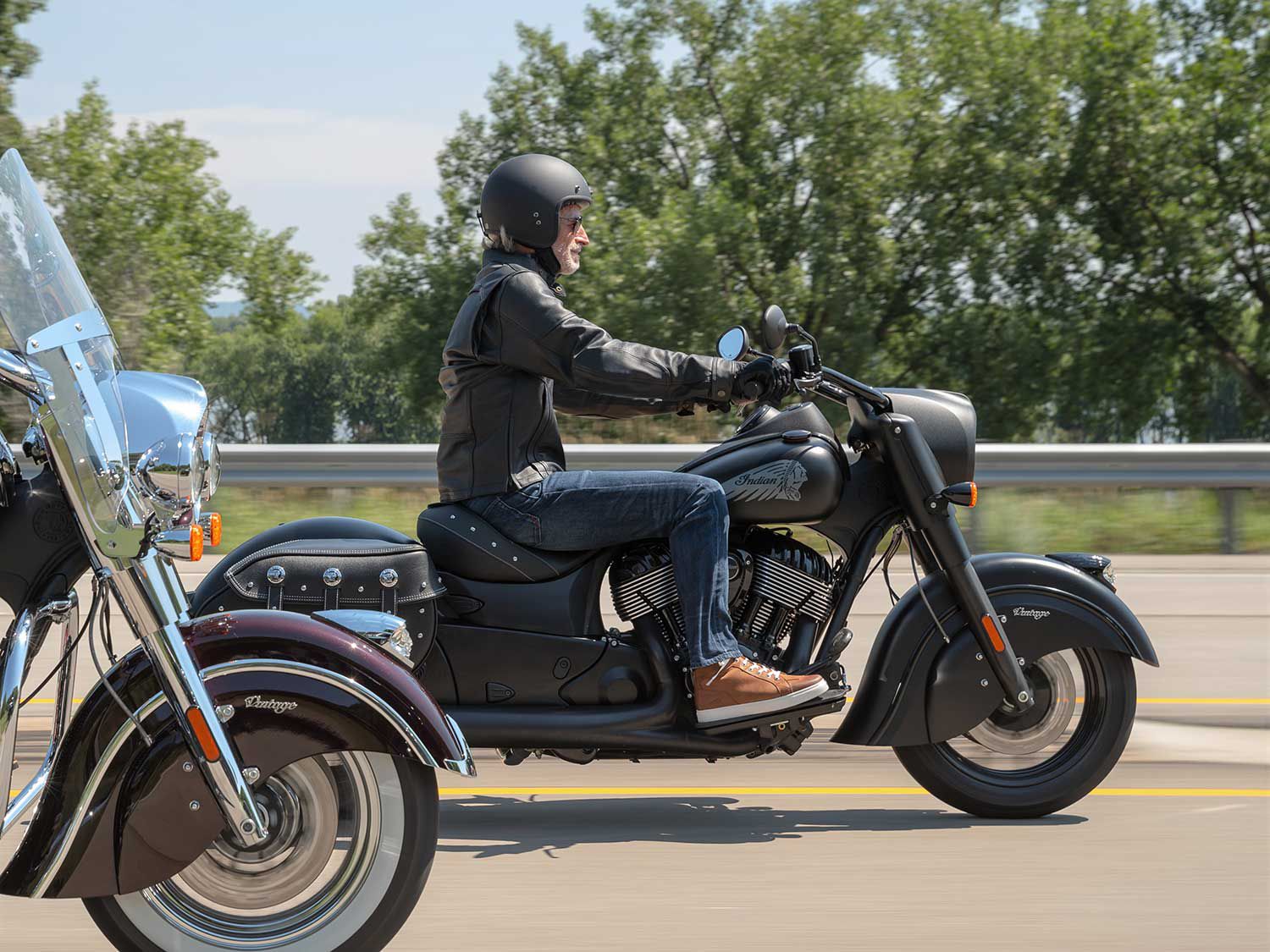 Indian has announced its models for 2021, with the new Vintage Dark Horse leading the charge. The regular Vintage model is to the left. (Indian Motorcycle/)

Indian Motorcycle has announced its lineup for the 2021 model year, and as expected, things are staying pretty consistent across the range for its cruisers, touring line, and baggers. There are some new additions however; we’re getting two model iterations in the mix, the Vintage Dark Horse and Roadmaster Limited, as well as several technology upgrades primarily to the company’s touring lineup as well as a whole suite of new accessories for the entire range. 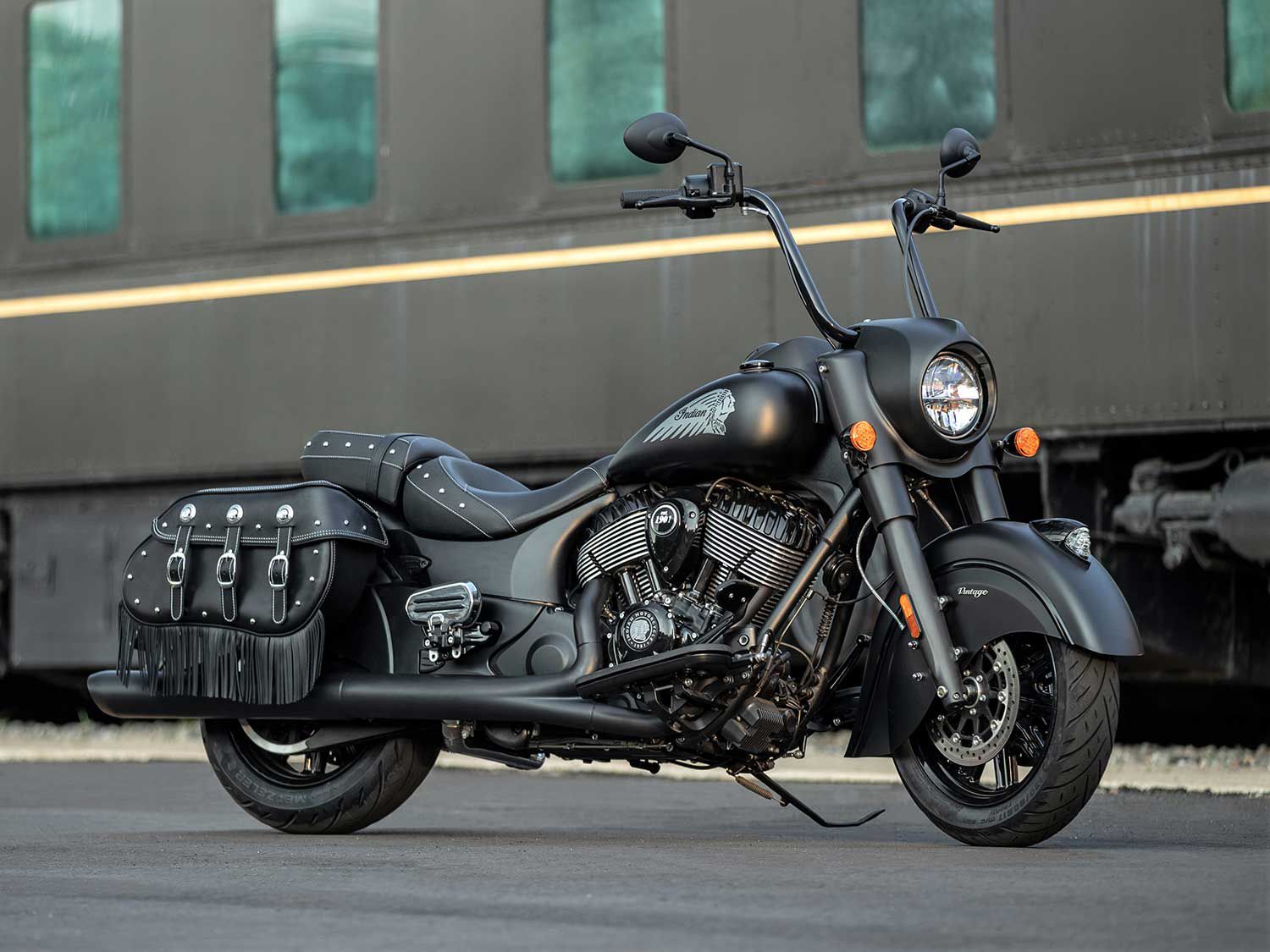 Think of the Vintage Dark Horse as the Chief Dark Horse, but with fuller fenders and fringed saddlebags, a touring rear air shock, ride modes, and ABS. Here, it’s accessorized with a touring saddle and taller handlebars. (Indian Motorcycle/)

Let’s hit the newbies first. Like the Indian Chief Dark Horse before it, the Indian Vintage Dark Horse goes for a matte-paint vibe, joining the Thunder Stroke lineup for 2021 as a touring cruiser with full-boat classic style. It builds on the existing Chief Vintage model—er, scratch that. It actually deconstructs the Chief Vintage, taking away the touring shield and any hint of color, and instead dousing the entire motorcycle in black. That means a touring chassis with air shock, ABS, and cruise control, and soft leather bags, though those are now black, but don’t worry, they still rock conchos and buckles. In fact, just think of the Vintage Dark Horse as the Chief Dark Horse except with bags and fuller fenders; in fact, the Chief Dark Horse isn’t listed in the 2021 lineup, so there you go. The Indian Vintage Dark Horse starts at $19,499, and is available in Thunder Black Smoke only. 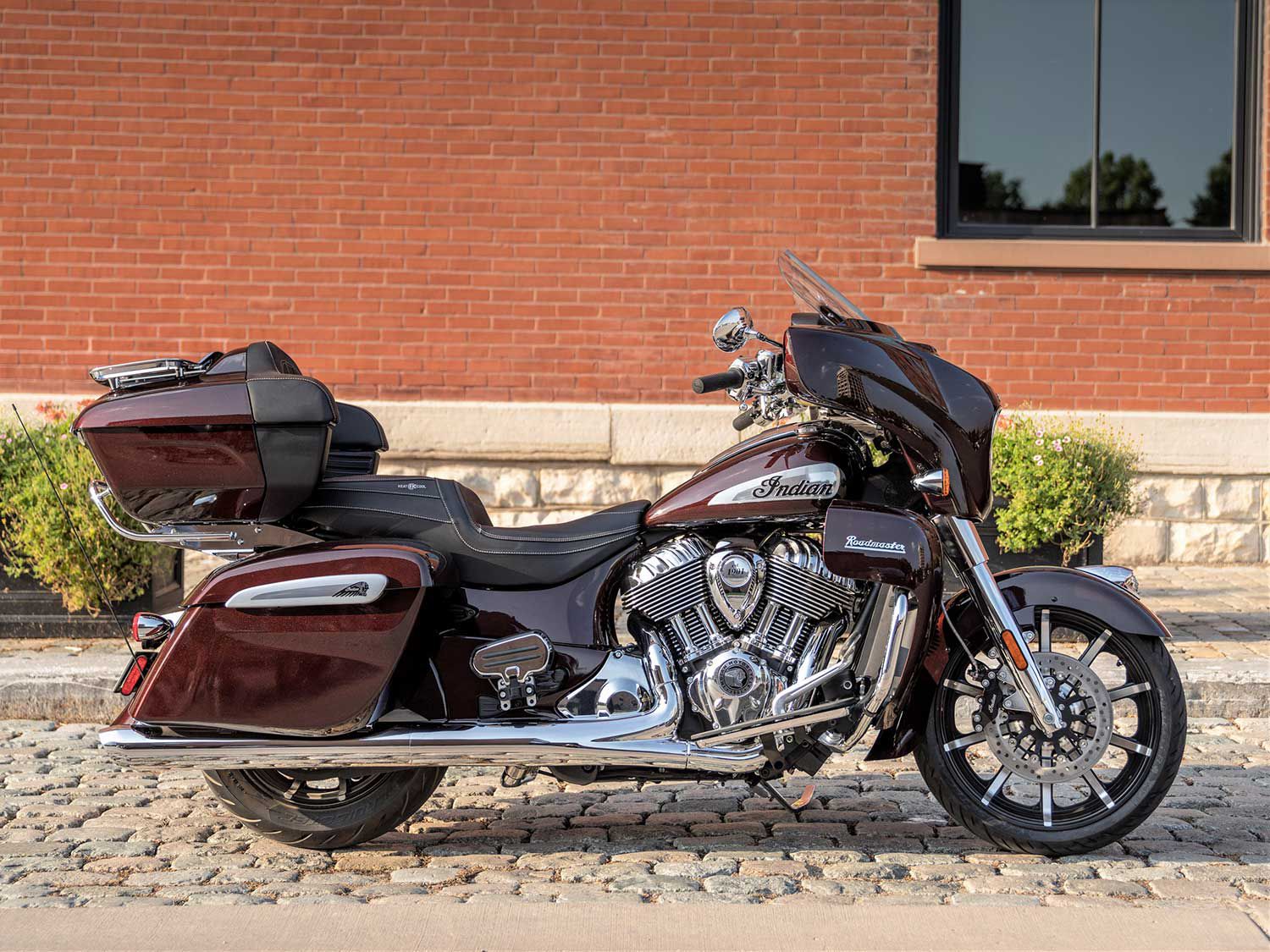 The other newbie is the Roadmaster Limited, which squeezes into the firm’s touring series between the Roadmaster and Roadmaster Elite at a price that starts at $30,749 (the Roadmaster starts at $29,999, but there’s no mention of the Elite for 2021, though last year’s model was $38,999). On the Limited you’ll get the requisite glossy paint and chrome finishes, but it takes most of its styling cues from the Roadmaster Dark Horse, with a sleeker, more modern fairing and the same open-type front fender and squared-off saddlebags as its darker brother. It’s available in either red or black.

Speaking of the Roadmaster Dark Horse, it gets a bit of a refresh this year, mainly in the form of more blacked-out finishes. The Roadmasters are all powered by the beefy air-cooled Thunder Stroke 116 engine and still bring handy touring features like Metzeler Cruisetec tires, adjustable airflow vents, heated grips, and an adjustable windshield along with remote-locking saddlebags, ABS, and cruise control. The Roadmaster Dark Horse retails at a starting price of $29,999, and can be had in black, white, or tan. 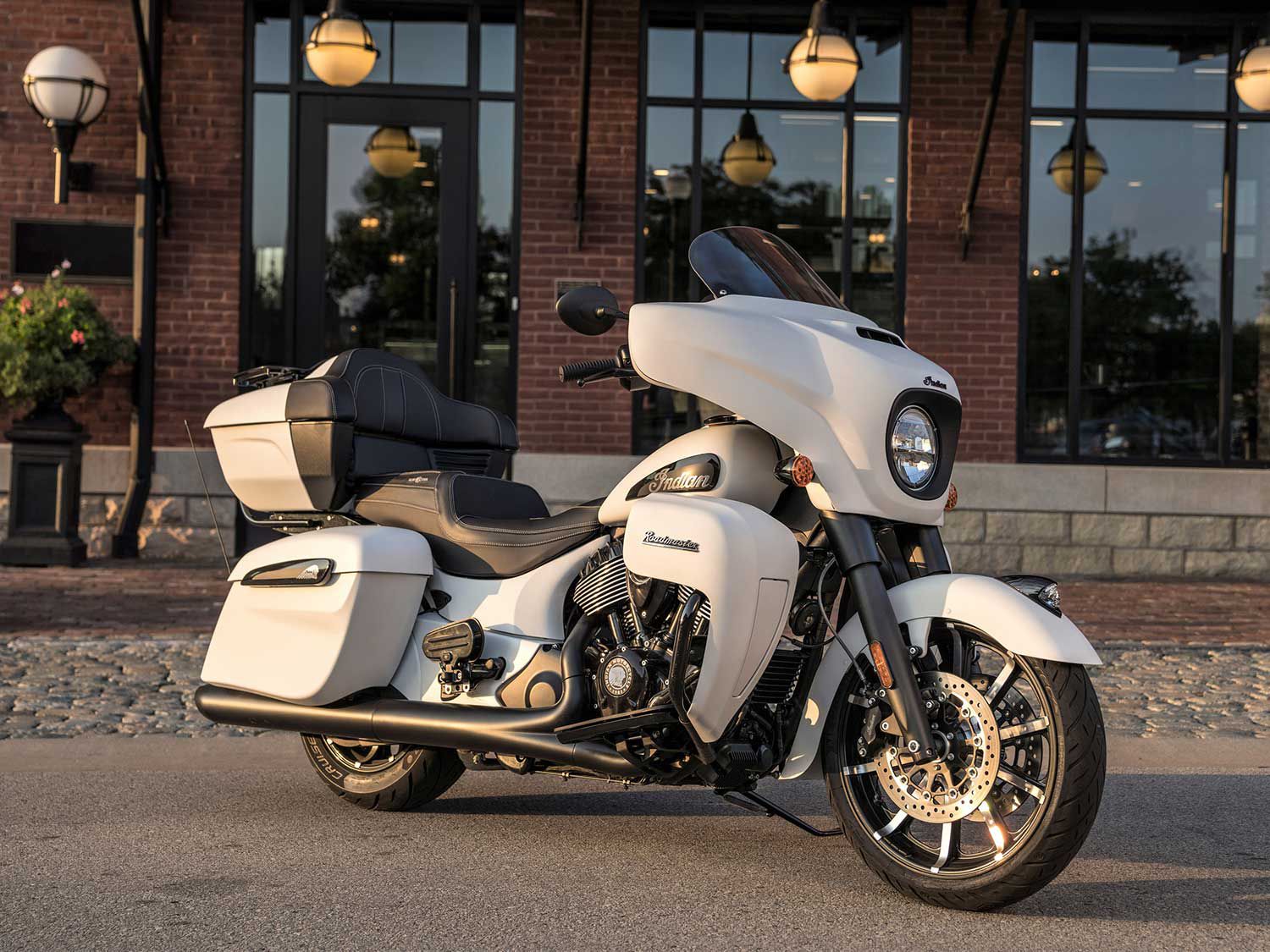 The Roadmaster Dark Horse adds more blacked-out bits and comes standard with Apple CarPlay and the new ClimaCommand seat. Here it is in White Smoke. MSRP is $29,999; as pictured, it’s $30,749. (Indian Motorcycle/)

Although Indian has added a good number of new models to the Scout series in the past year or so, the main lineup returns basically unchanged for 2021—the bikes just get new paint colors. The Scout Sixty and Scout Bobber Sixty are both back with their 78 hp (claimed) 1,000cc motor, with each coming in at an MSRP starting at $8,999. If you want the more powerful, no-nonsense original, the 1,133cc Scout is back too, along with its Scout Bobber stablemate. Colors like Stealth Gray and Sagebrush Smoke are options on the Scout Bobber Twenty, with Maroon Metallic and White Smoke as well as good ole black making the cut for on the Scout Bobber. 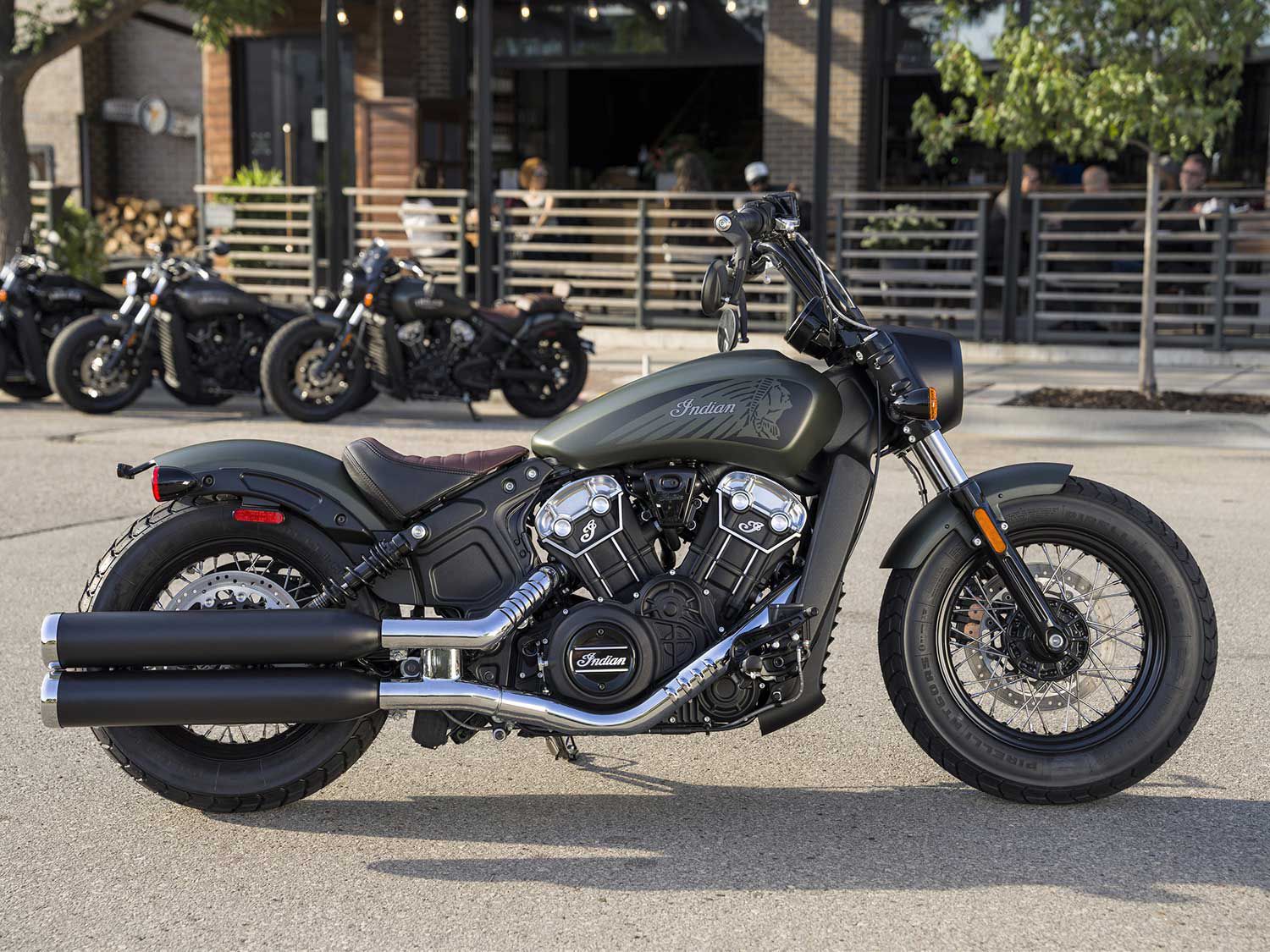 The 2021 Scout in Maroon Metallic over Crimson Metallic. MSRP is $11,499 for the black base model. (Indian Motorcycle/) Apple CarPlay now comes standard on a good chunk of the touring and models if they’re equipped with Ride Command with navigation, like the new 2021 Roadmaster Limited. (Indian Motorcycle/)

Indian says there’s some new ride-enhancing technology on tap for 2021 as well, but these apply mainly to the touring and bagger models, both in the form of standard equipment or as an upgrade. The ClimaCommand Heated and Cooled Seat Indian announced a short while back has migrated onto the Roadmaster Limited and Roadmaster Dark Horse as standard equipment, but the ClimaCommand is also available as an upgrade for all Thunder Stroke models. Additionally, the 2021 ClimaCommand’s heating and cooling can now be adjusted directly through the Ride Command infotainment system on select 2020 and 2021 models like the Chieftain and Roadmaster, so you can manage comfort on the road. 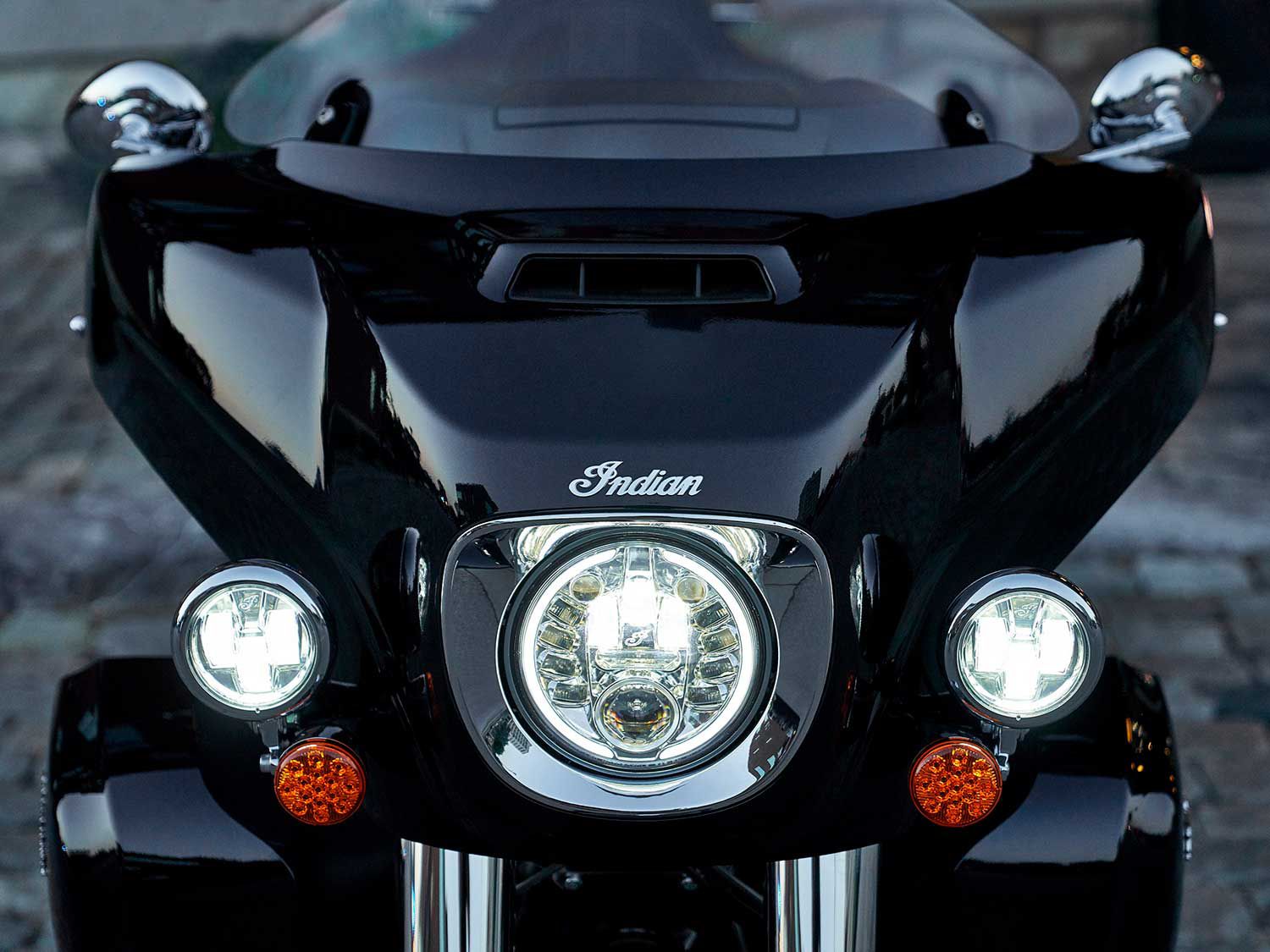 Lastly, you can spring for a better audio experience on the Challenger with the PowerBand Audio quick-release trunk amplified speaker kit. Pair it with PowerBand Audio Plus, and the system claims to deliver sound that’s 50 percent louder than the Indian Challenger’s stock audio. 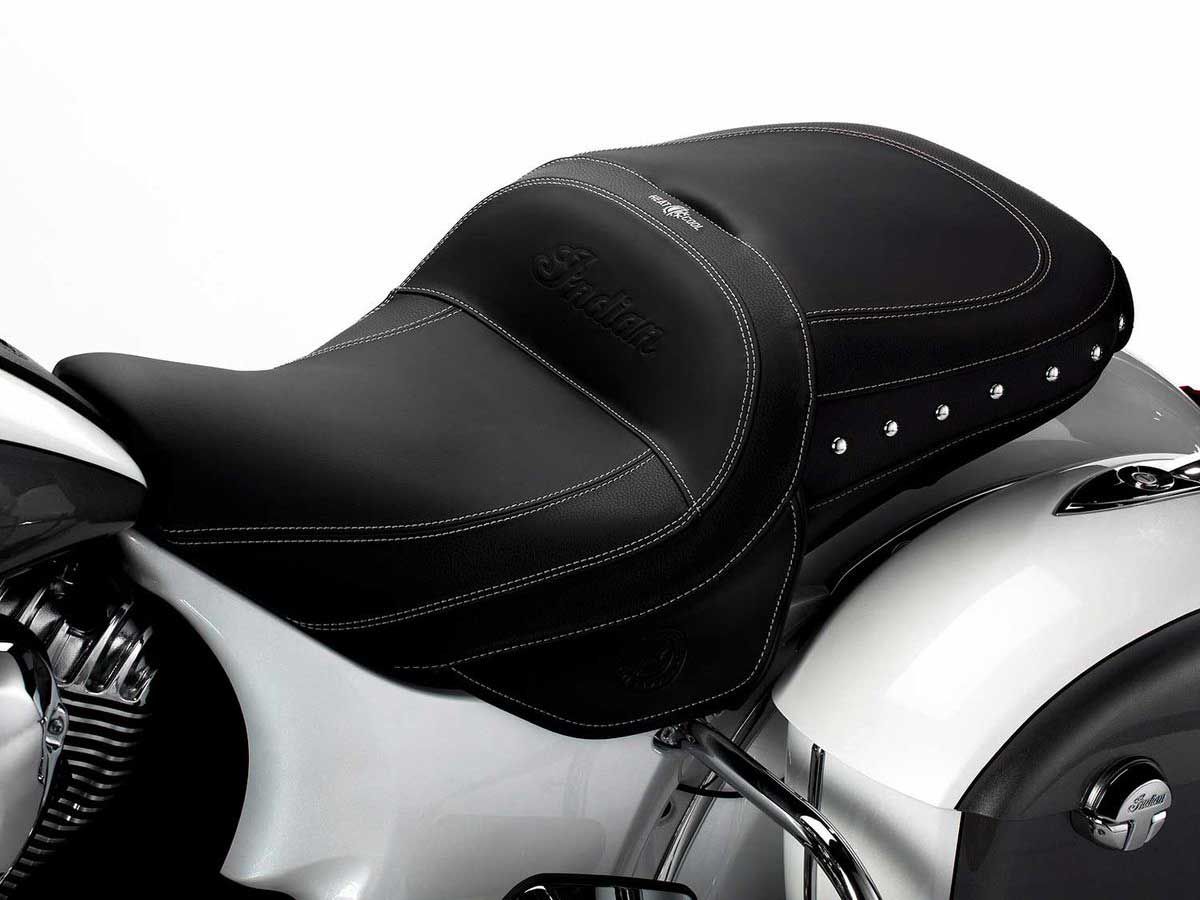 Touring types can upgrade to the heated and cooled CilmaCommand seat which can now be controlled via the Ride Command screen on select models. (Indian Motorcycle/)

The Challenger gets other accessory options too; Indian has added a slew of touring amenities for that model, like a quick-release trunk that adds 17 gallons of additional storage. It’s lockable via key fob and can fit two full-face helmets. There’s also a new quick-release padded sissy bar with low-profile passenger pad available for the Challenger and Thunder Stroke models, as well as taller accessory windshield options, and an extended reach seat and various mid-rise and apehanger handlebar options. For those riding two-up, a quick-release passenger sissy bar, passenger backrest pad, and passenger floorboards are also on offer. 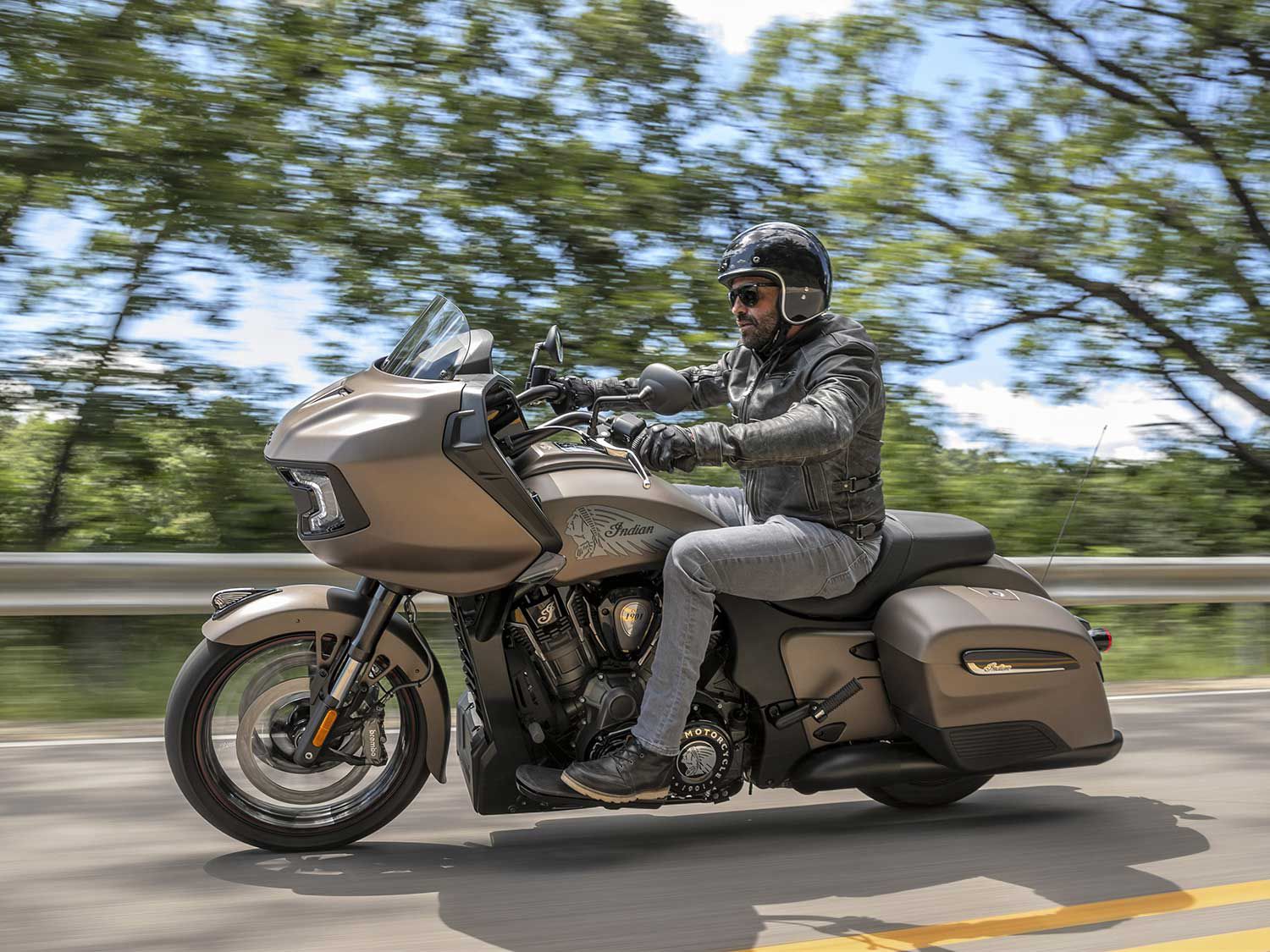 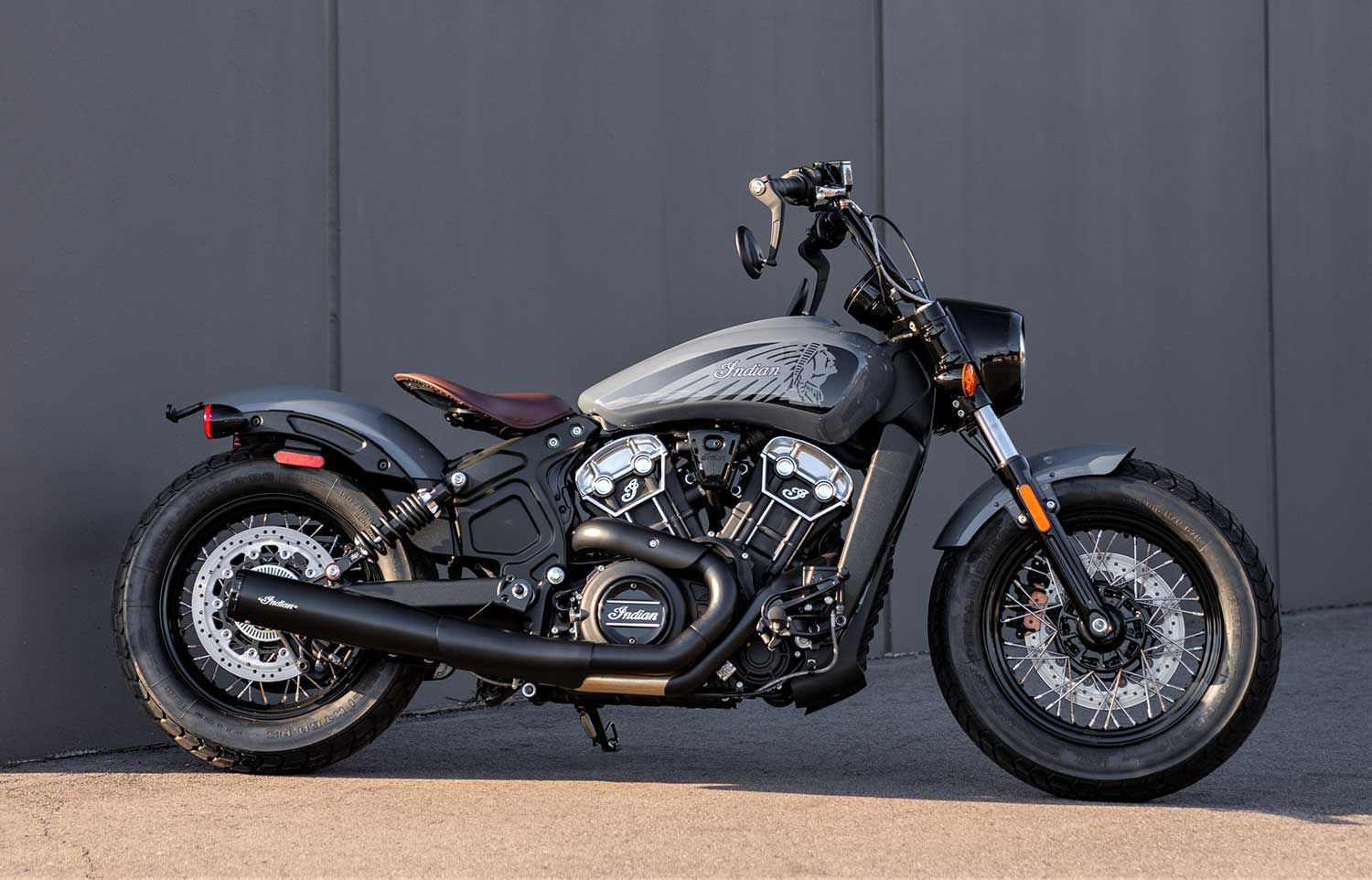 Stage 1 accessory exhausts are available for the Scout series as well, with either 2-in-1 full systems or a shorty slip-on muffler kit – both available in chrome and matte black. (Indian Motorcycle/) 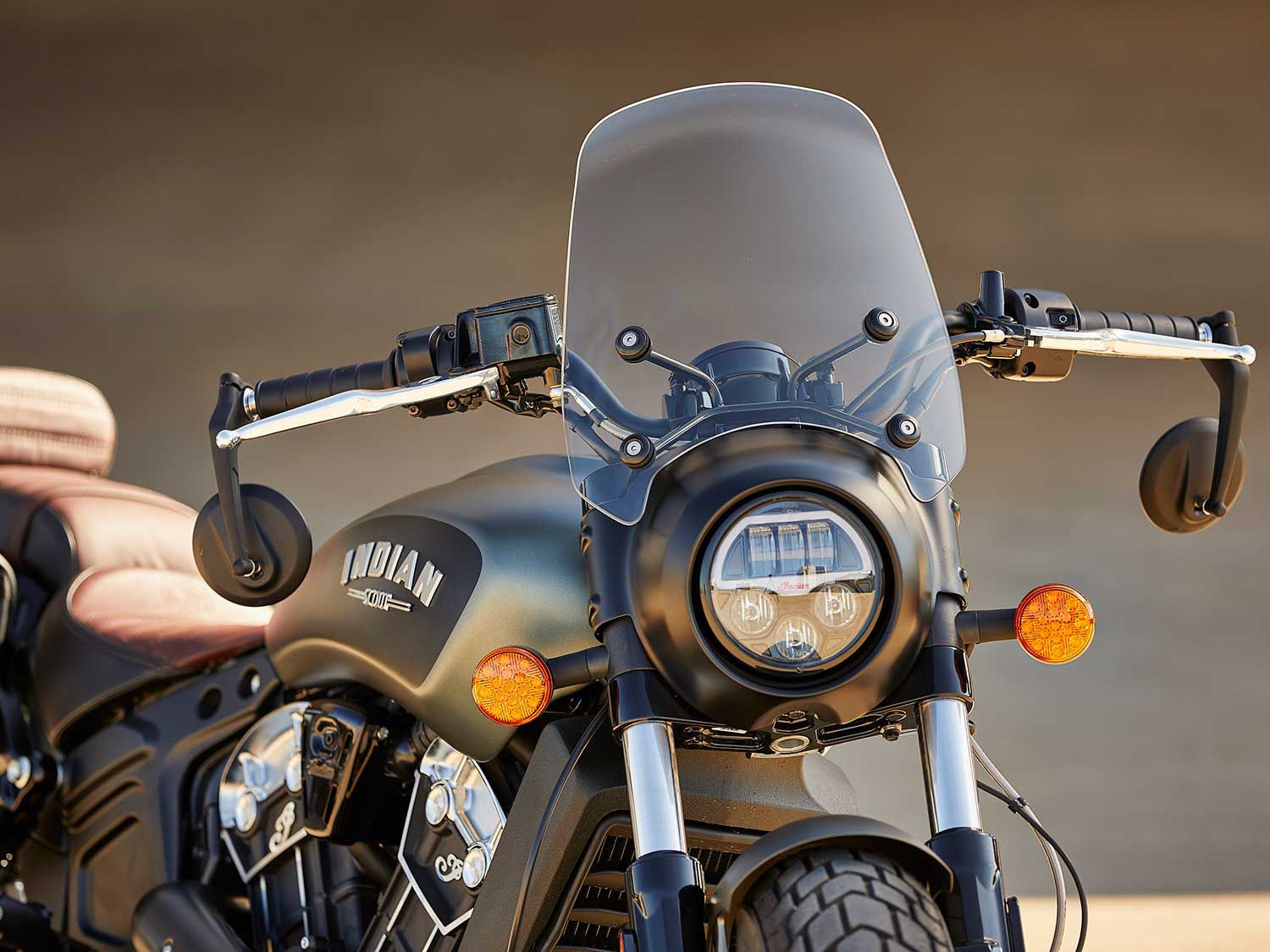 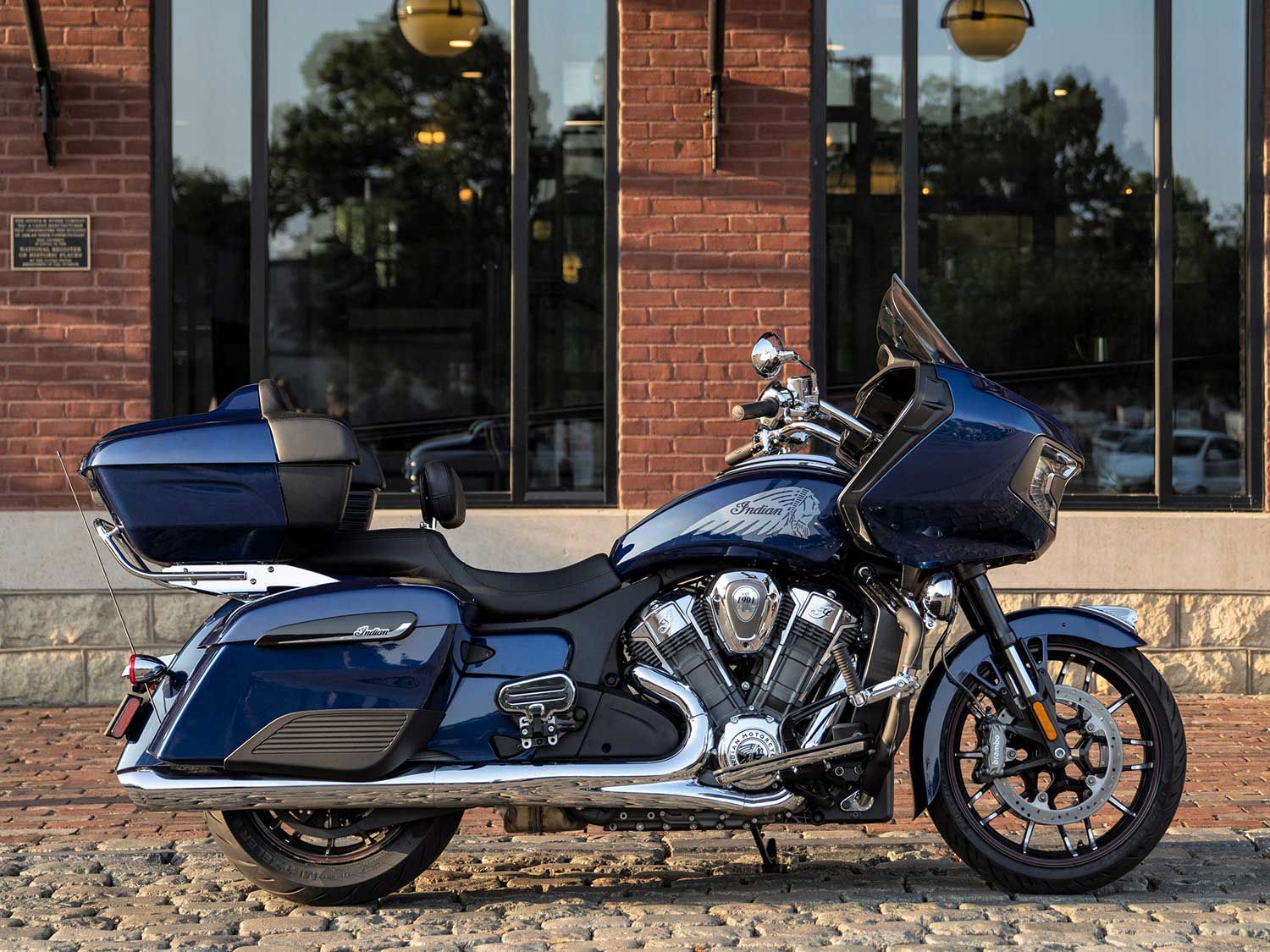 The Challenger Limited for 2021, which comes in Thunder Black Pearl, Deepwater Metallic, or Ruby Metallic, will set you back anywhere from $27,999 to $28,749. (Indian Motorcycle/) 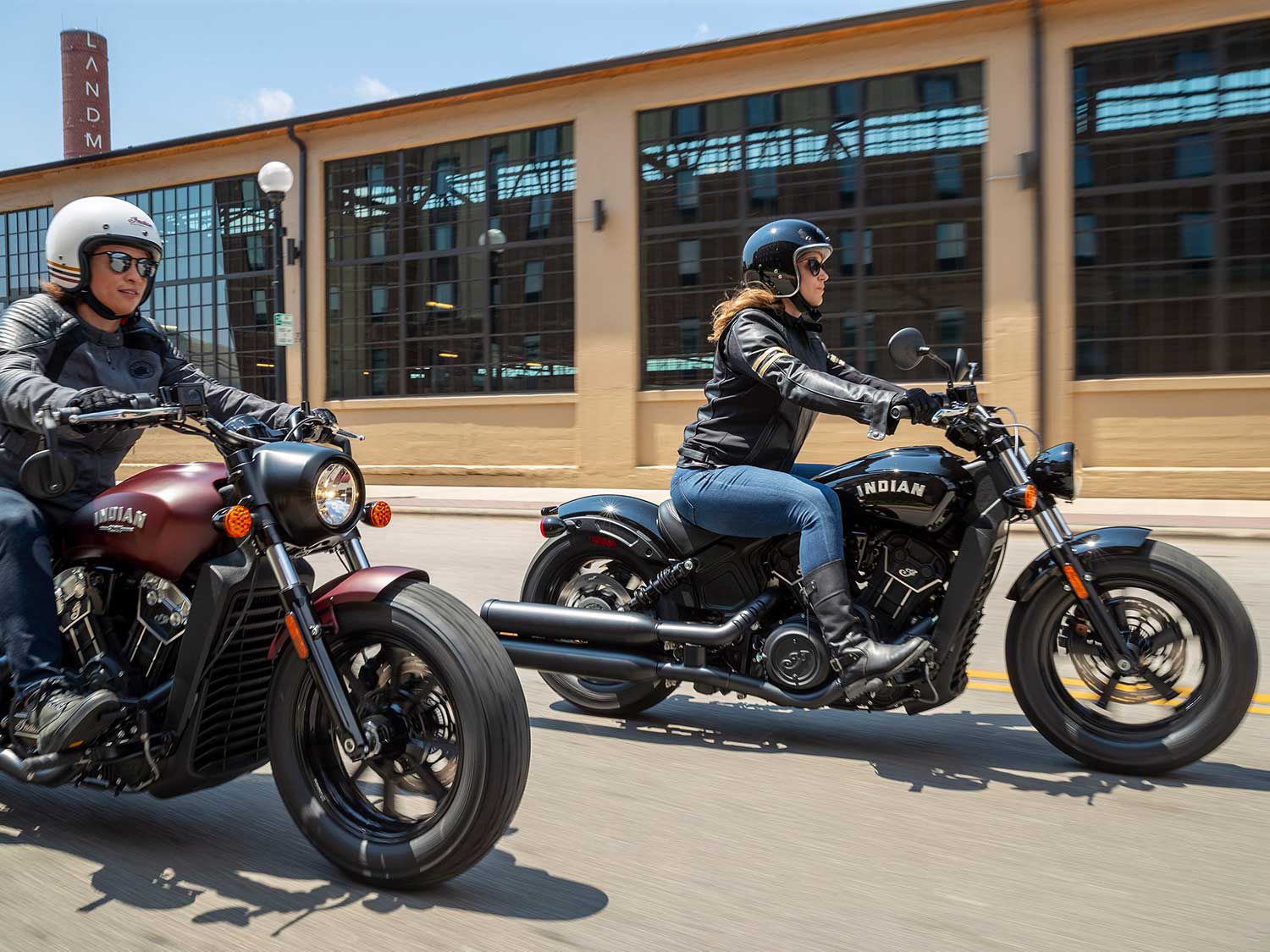 The Scout Bobber Sixty returns unchanged for 2021 save for a couple of new color options and additional accessories. (Indian Motorcycle/)