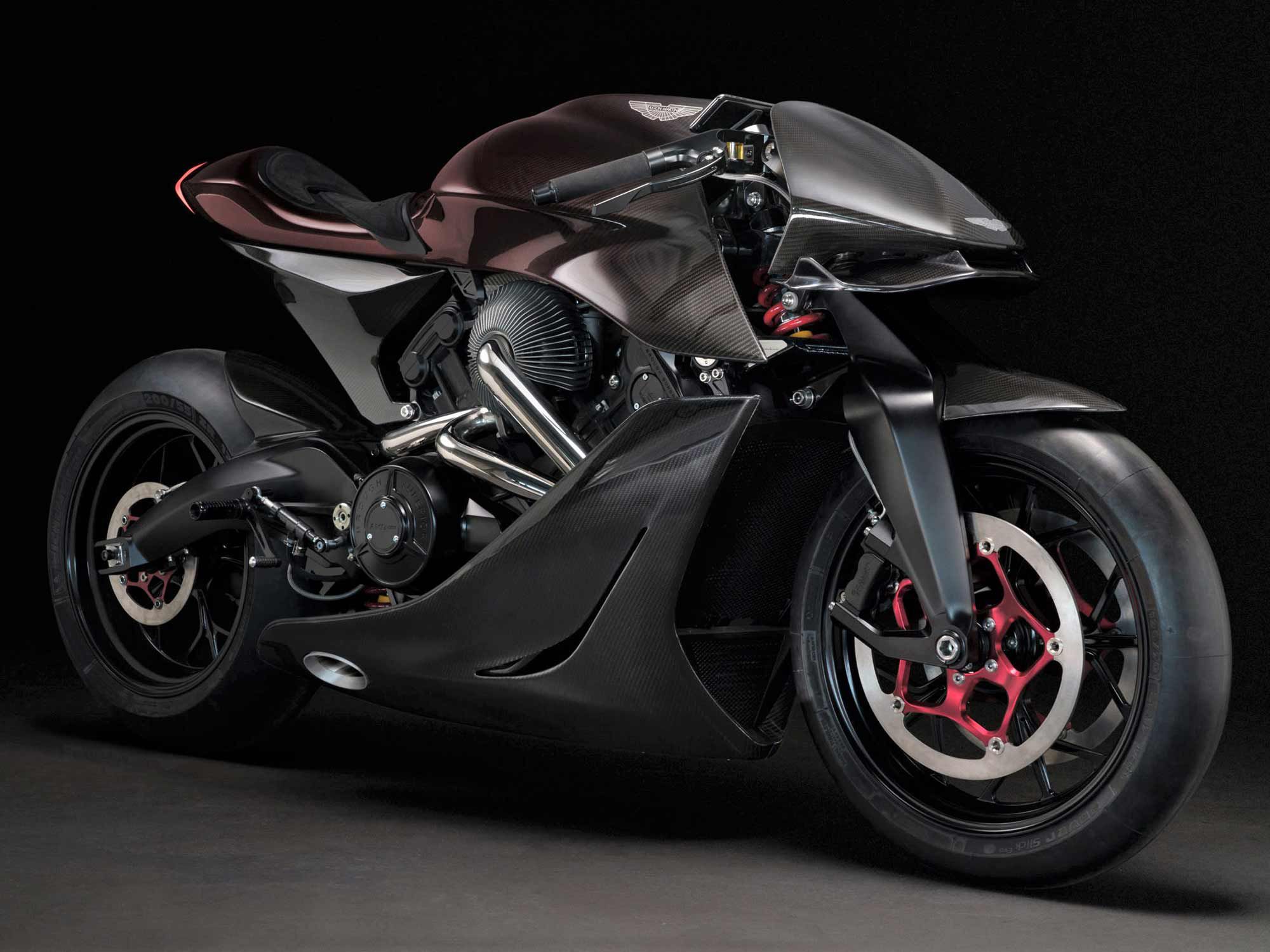 If you’re looking for legendary British automotive nameplates, you won’t find many with more cachet than Aston Martin on four wheels and Brough Superior on two. Later this year you’ll be able to buy a machine that combines both in the form of the AMB 001.

Shown at last year’s EICMA expo, the AMB 001 is engineered by Brough Superior, which is now based in France and headed by Thierry Henriette. He’s also boss of Boxer Design, which brought us the exotic VB1 superbike 20 years ago and was behind machines like the Voxan Scrambler and Aprilia’s 2001 Blue Marlin concept bike. It uses Brough’s water-cooled DOHC V-twin engine with the addition of a variable-geometry turbocharger and intercooler to hike power to 180 hp with some fairly restrained levels of boost. 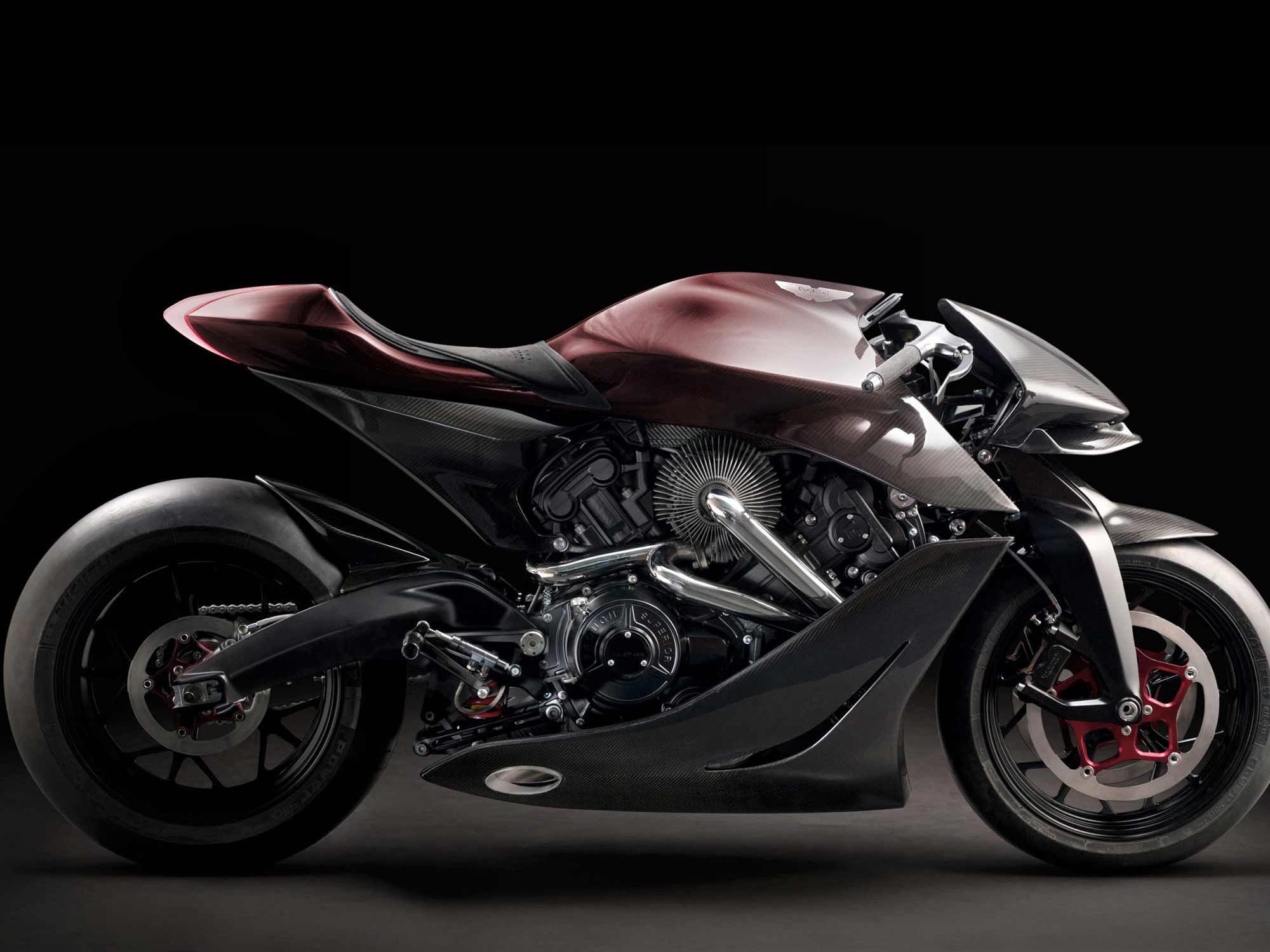 The exclusive bike is powered by a turbocharged 997cc Brough V-twin engine and rides on a Hossack-style double-wishbone suspension arrangement up front. (Aston Martin/)

Aston Martin has been going through a rough patch recently, including an IPO in 2018 that saw its share price plummet and a COVID-19 crisis that’s contributed to further losses at the start of this year, just after Canadian billionaire Lawrence Stroll had stepped in as chairman, heading a consortium of investors underpinning a 536 million pound (approximately $666 million) bailout package. And just last month, Aston’s long-term CEO Andy Palmer was replaced by former Mercedes-AMG man Tobias Moers. Despite all this upheaval, the plans for the AMB 001 remain on course. 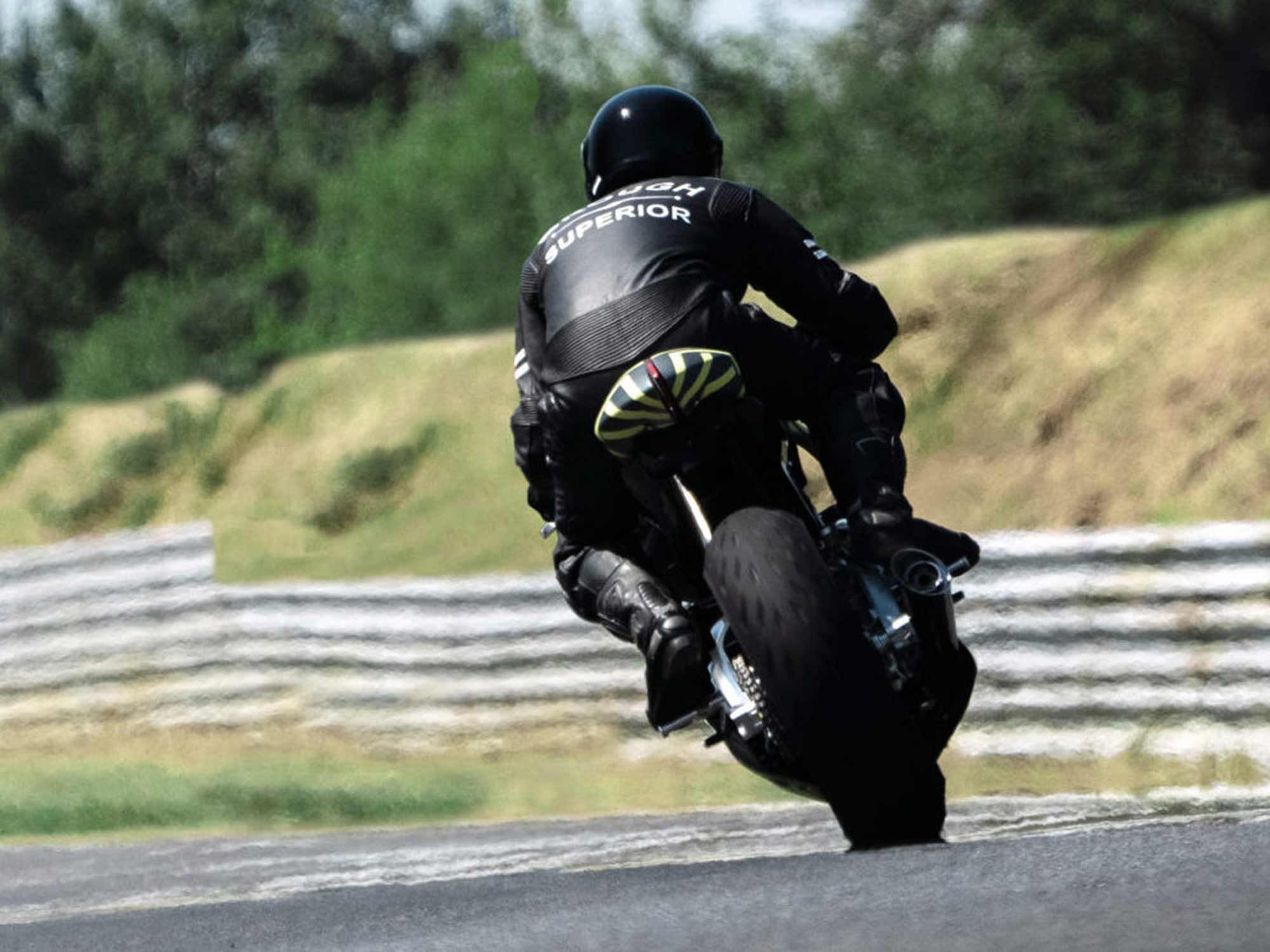 The AMB 001 is in full testing mode and has been seen going through the paces on local French circuits. (Aston Martin/)

The AMB 001 has now started its official testing process, with a disguised prototype appearing on the Pau-Arnos circuit in southern France, a couple of hours from Brough’s base in Toulouse.

Despite a waspish black-and-yellow camo wrap, the prototype clearly doesn’t stray far from the styling of the EICMA bike, which was numbered “001/100.” Aston has also released pictures of a second machine, numbered “002/100”—suggesting buyers will be getting these very machines when deliveries start later in the year.

Technically, the Brough engine—which makes 102 bhp at 9,600 rpm in its stock form from 997cc—has its power nearly doubled by the addition of a turbo. The 88-degree V-twin is bolted to a backbone frame, but provides much of the bike’s structure itself. At the back there’s a self-supporting carbon fiber subframe, while up front a Hossack-style double-wishbone suspension arrangement is used, as on Brough’s other current models. 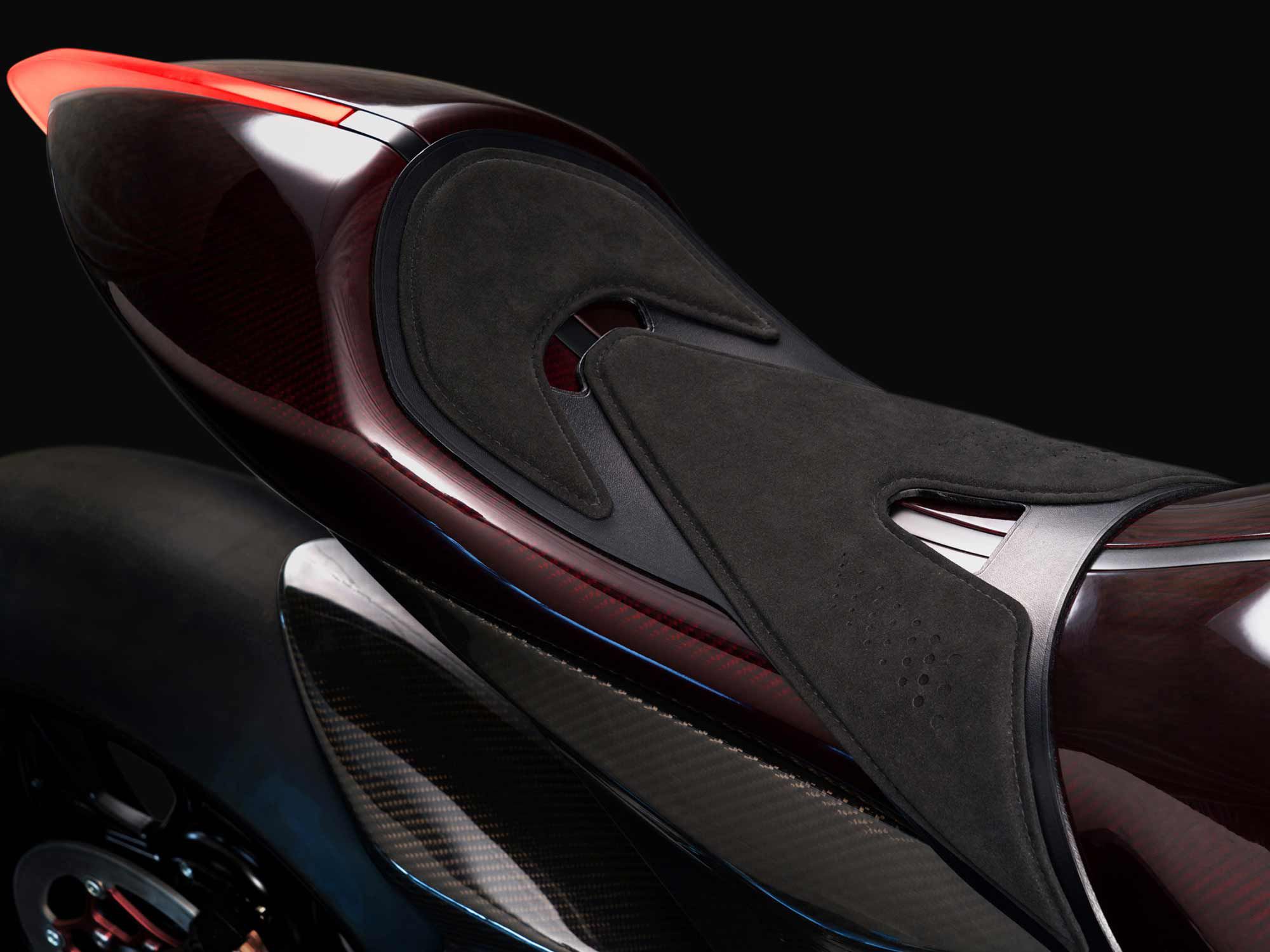 Also unusual? An aluminum fin running along the carbon fiber tank, out to the rear. (Aston Martin/)

The bodywork’s structure is also unusual, developed with the help of composites engineering firm Mecano ID. Henriette said: “One of the key design features of the AMB 001 is an aluminum fin that runs along the full length of a carbon fiber tank, passing under the saddle and out onto the rear. The body holding the fin and supporting the saddle is one of the areas where we called on the unique knowledge of Mecano ID, who joined the project to apply specialist aerospace-quality carbon fiber skills to the exclusive AMB 001.” 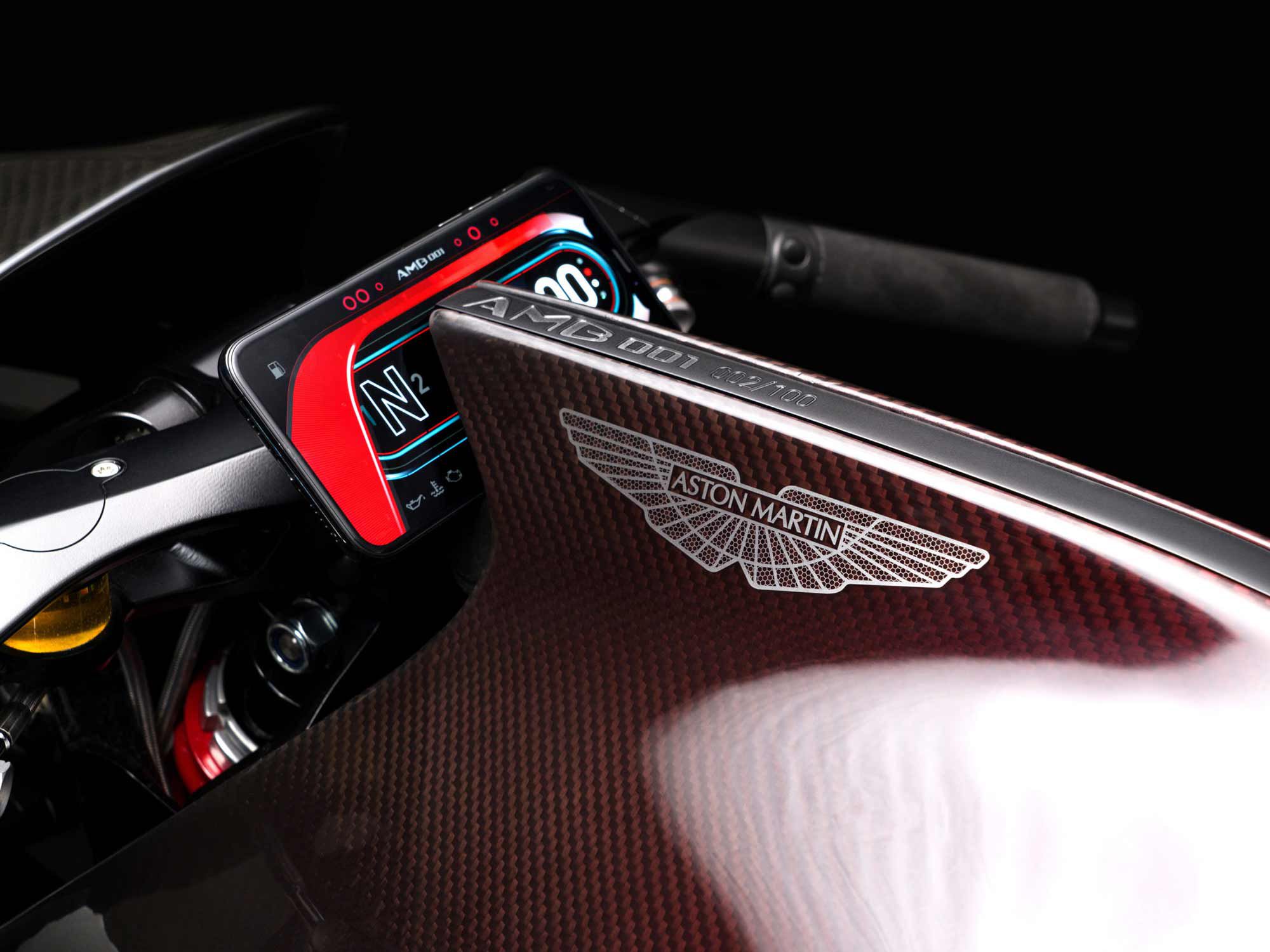 As noted on the front part of the fin, only 100 AMB 001s will be built at Brough’s Toulouse factory. (Aston Martin/)

Aston Martin is already accepting inquiries about the bike, having announced a price of 108,000 euros in Europe, including 20-percent tax (that equates to around $100,000 pre-tax in the USA). Aston Martin Executive Vice President and Chief Creative Officer Marek Reichman said: “Everybody involved has managed to make tremendous progress with the development of AMB 001, despite the challenges we have all been facing. This special motorcycle is, like our road cars, the result of beautiful design melding with modern technology to produce a bike that any collector will be proud of. We are delighted to see how much progress has been made, both on and off track, and look forward to the moment when production starts for this stunning machine.”

Only 100 of the bikes will be built, and despite the Aston badges they’ll actually roll out of Brough’s Toulouse assembly plant when production starts this autumn.

It’s actually not the first time Boxer Design has been involved with a plan to build an exotic superbike bearing a legendary car maker’s name—the AMB 001 has echoes of a mid-1980s project to create a Lamborghini-branded bike. Back then, Boxer built the Lamborghini Design 90 at the behest of Lambo’s then-owners the Mimram brothers, featuring a Kawasaki engine and distinctively straked bodywork that was intended to mimic the increasingly outrageous Countach supercar of the era. Despite plans to make as many as 50 of the machines, only six were built before Chrysler bought struggling Lamborghini in 1987. Let’s hope the Aston Martin AMB 001 has a better fate.

The Aston Martin-badged AMB 001 concept bike is heading for production. It’ll be built by Brough Superior this fall.