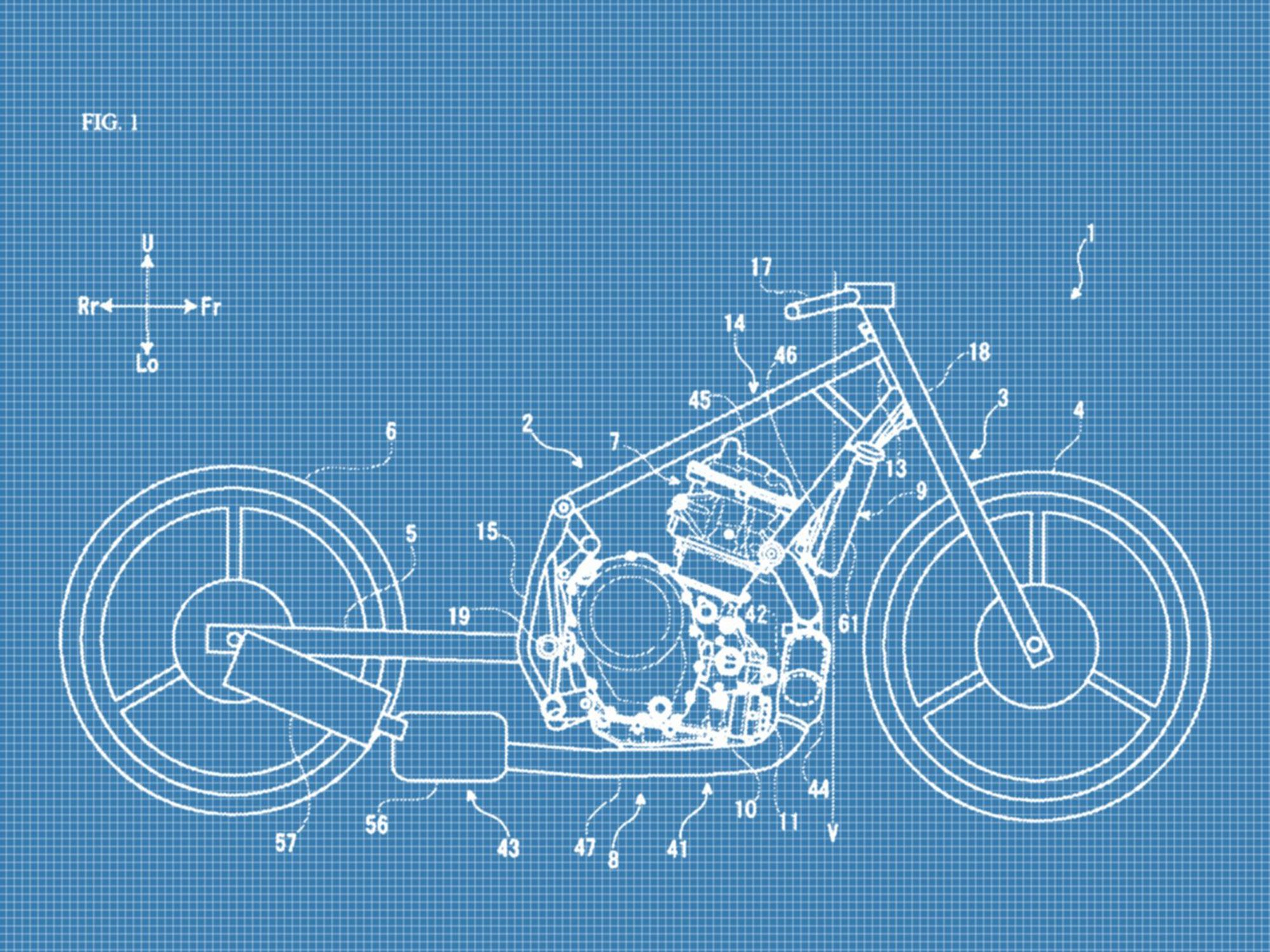 Seems Suzuki’s long-running Recursion project is still in the works, but has taken on several different forms. (Suzuki Motor Corporation/)New models from Suzuki have been a rarity over the last few years, but a newly published patent shows that behind the scenes the firm is still working on the parallel-twin project it first hinted at with the Recursion concept nearly seven years ago.

It’s been a long and convoluted development path for the twin, which began life as the SOHC, 588cc, turbocharged unit in the Recursion in 2013 before mutating into the 700cc, DOHC XE7 engine that was shown two years later, still packing a turbo but otherwise completely redesigned. Since then, there’s been a stony silence from Suzuki but a steady drip of patents to show the project remains underway. 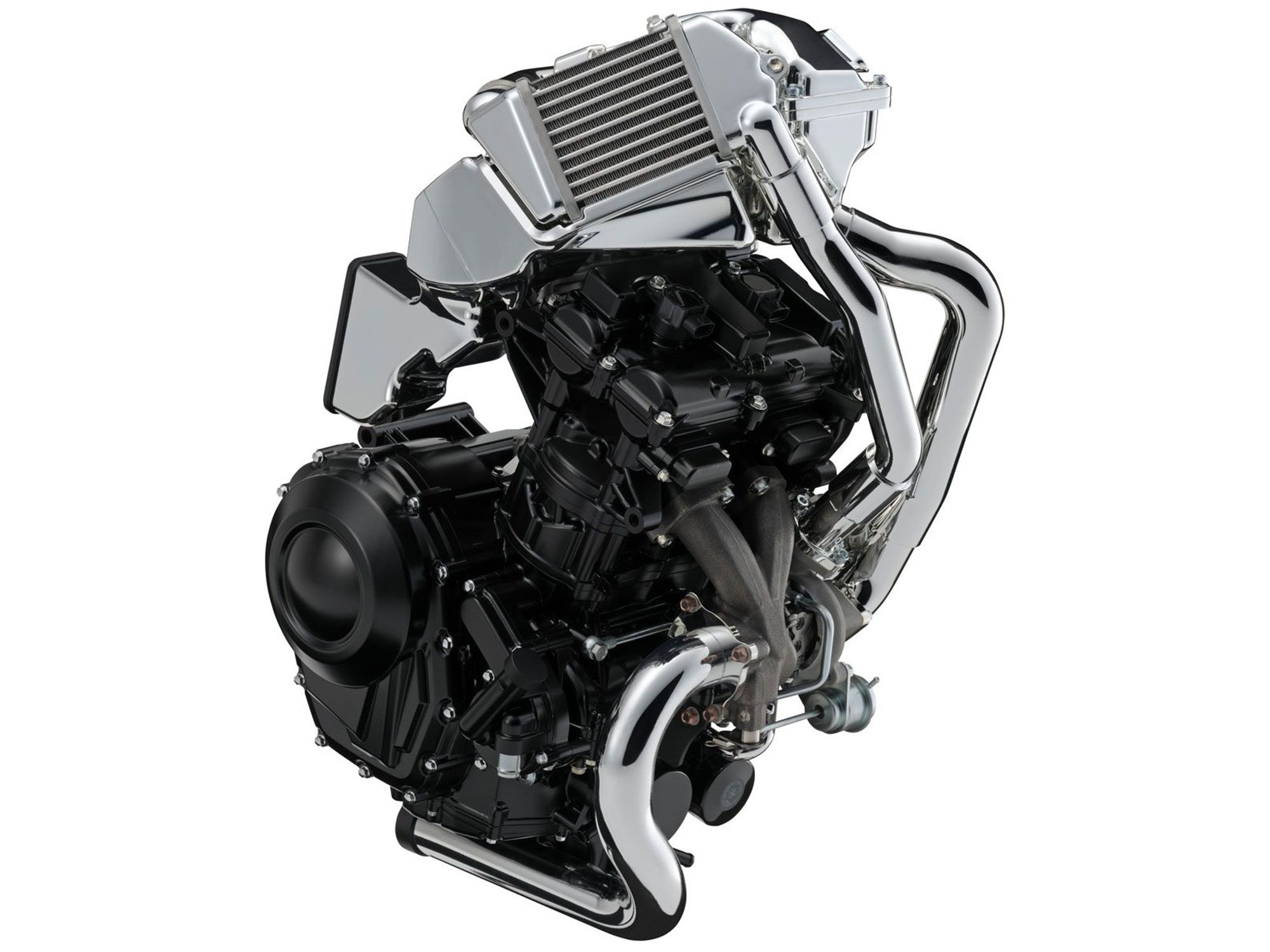 The latest patent from the company, filed in Japan last February but only published on August 20, 2020, is the first news we’ve seen on the Recursion project for a while, but reveals an interesting development—the turbocharger is gone.

Every previous patent about the new design featured the exhaust-driven blower, largely because that’s what led to most of the patentable technology. The turbo impacted the engine’s packaging, its airbox design, its cooling, and its exhaust; after all, apart from the short-lived mid-1980s Japanese efforts, turbos have been largely ignored by bike designers.

The new Suzuki patent, however, shows the XE7 engine shorn of its turbo and intercooler, adopting a much simpler, normally aspirated layout instead. That doesn’t mean the turbo version has been killed; it’s just that the boosted version has needed much more development, leading to all the patents that have kept us informed of its progress. The chances are that a normally aspirated version of the engine has always been part of Suzuki’s plan, but the more conventional design means it simply hasn’t required additional patents. In this instance, the patent relates simply to the layout and position of the catalytic converter, which is sited diagonally across the front face of the engine. The idea is that putting the cat at that angle locates it close to the exhaust ports to ensure it heats up quickly after the engine starts while also allowing it to be long and wide enough to be effective without sacrificing ground clearance like an under-engine design would.

The turbocharged version, which appeared in its own catalyst-related patents published last year, manages to use shorter header pipes leading straight into the turbo, with the catalyst fitted straight to the turbo’s exhaust and placed vertically down the front of the engine. Without the turbo, the exhaust header pipe lengths are more important to the engine’s performance and power delivery, needing to be longer than those used on the turbo version, hence the repositioned catalytic converter.

Without a turbo, the normally aspirated engine has to accommodate longer header pipes and reposition the cat. (Suzuki Motor Corporation/)How Will The Non-Turbo XE7 Stack Up?

With its roughly 700cc capacity and parallel-twin layout, the new Suzuki twin is likely to be a rival to the likes of Kawasaki’s Ninja 650 and Z650 models and Yamaha’s MT-07, with about 80 hp on tap.

As such, the engine looks like a viable replacement for the ancient 650cc V-twin used in the SV650 and V-Strom 650. As well as having a cleaner, more modern design than the V-twin SV650 engine—which can trace its roots back more than 20 years—a parallel twin cuts down on the component count when compared to a V-twin design, with half the number of camshafts and a simpler cam drive system, to reduce manufacturing costs. It’s also easier to package in a bike, simplifying exhaust routing and eliminating longstanding V-twin problems like how to mount the rear shock away from the rear cylinder head and its exhaust heat.

With Honda’s CB500 range, Kawasaki’s 650s, and Yamaha’s MT-07 and Ténéré 700 all enjoying the advantages of the parallel-twin layout for their midsize machines, Suzuki’s V-twin design has become an outlier. The firm is clearly looking to follow the same route as its rivals in the future. 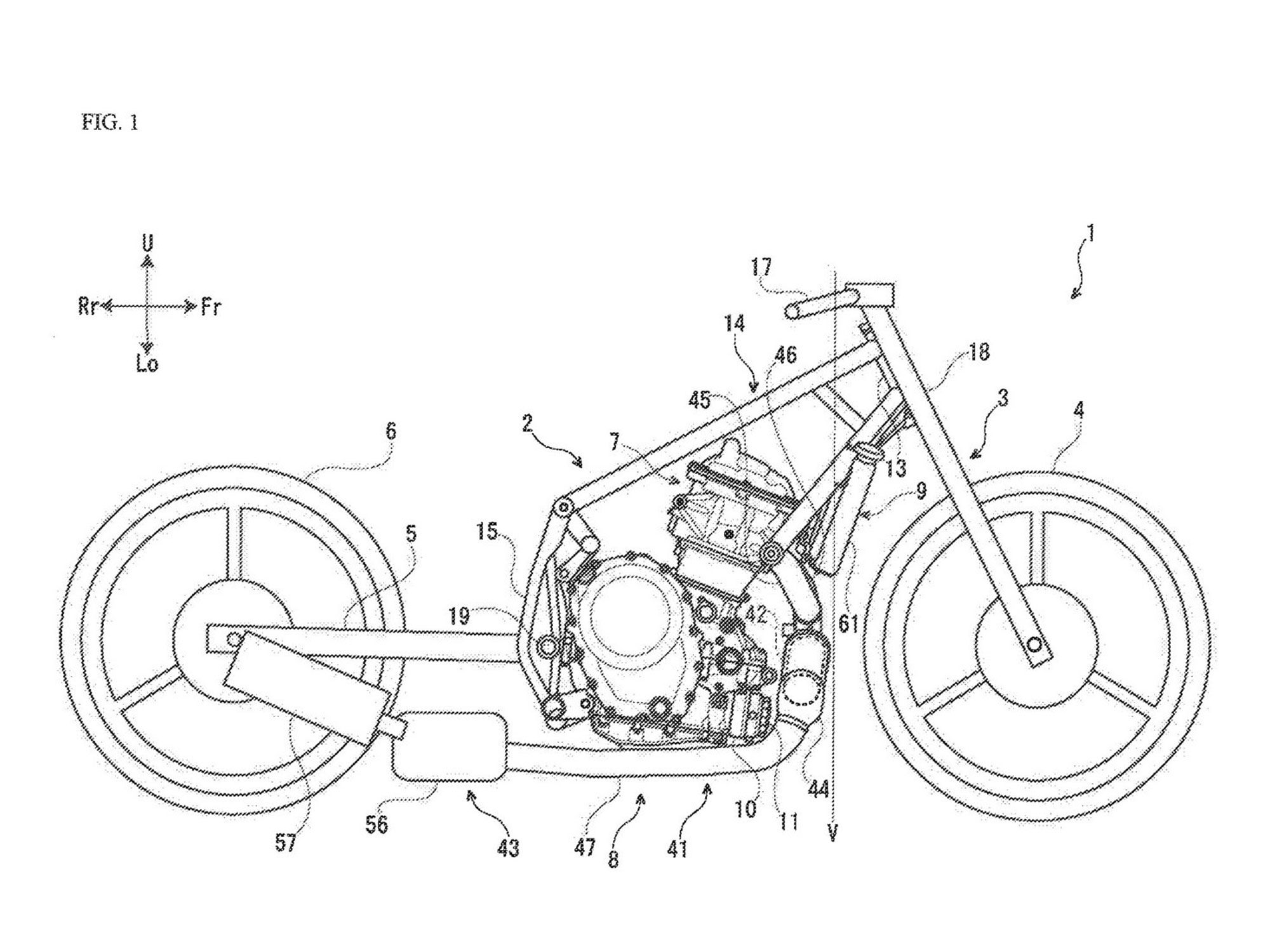 With patent activity still ongoing, the turbocharged version of Suzuki’s new parallel twin remains a live project even seven years on from the original Recursion concept bike’s debut at the Tokyo Motor Show.

It’s hard to second-guess the power it might make, since it depends entirely on the levels of boost used, but it should be easy to make GSX-R600-matching power figures or even GSX-R750 levels of performance. Both those bikes are showing their age and have been dropped from many international markets due to emissions rules, so the development of the new parallel twin could be Suzuki’s route back into the sportbike market. 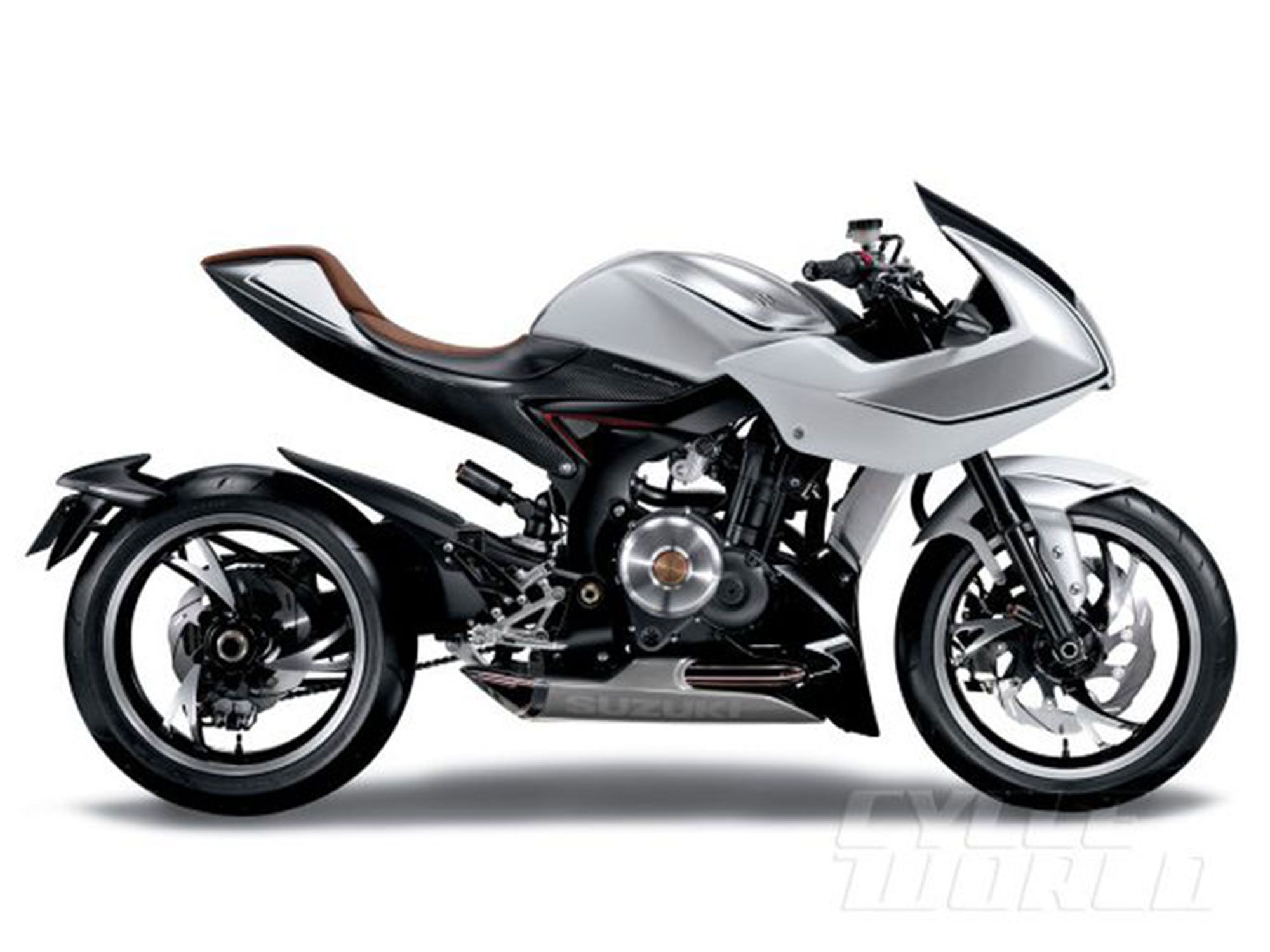 Seven years on, there’s still hope of seeing the Recursion reach production, though not necessarily in this form. (Suzuki Motor Corporation /)What’s more, the torque boost of a turbo means the blown version of the XE7 engine could also act as a replacement for the 1,050cc V-twin of the V-Strom 1050, another ages-old engine with roots going back to the mid-‘90s TL1000S motor. That means that by creating a range of normally aspirated and turbocharged versions of the same parallel twin, Suzuki could spawn an engine that powers machines all through its model range, creating huge economies of scale by allowing seemingly disparate bikes to share large numbers of components.

New patents show Suzuki’s long-running parallel-twin Recursion concept is still alive and well, and has since spawned a non-turbo version of that powerplant.

Published in: NewsThe model honors the past while offering modern on- and off-road trekking performance Sixty years after Honda introduced customers to the joys of...
Read more
Previous articleRoyal Enfield Entering The Electric Era
Next articleRoam Further with the 2020 Husqvarna 701 Enduro LR