The ever-shifting sands of the motorcycle market are hinting that low-cost middleweight all-rounders could be the next big growth area, and if that’s the case, then Triumph might be set to cash in with the new Trident. 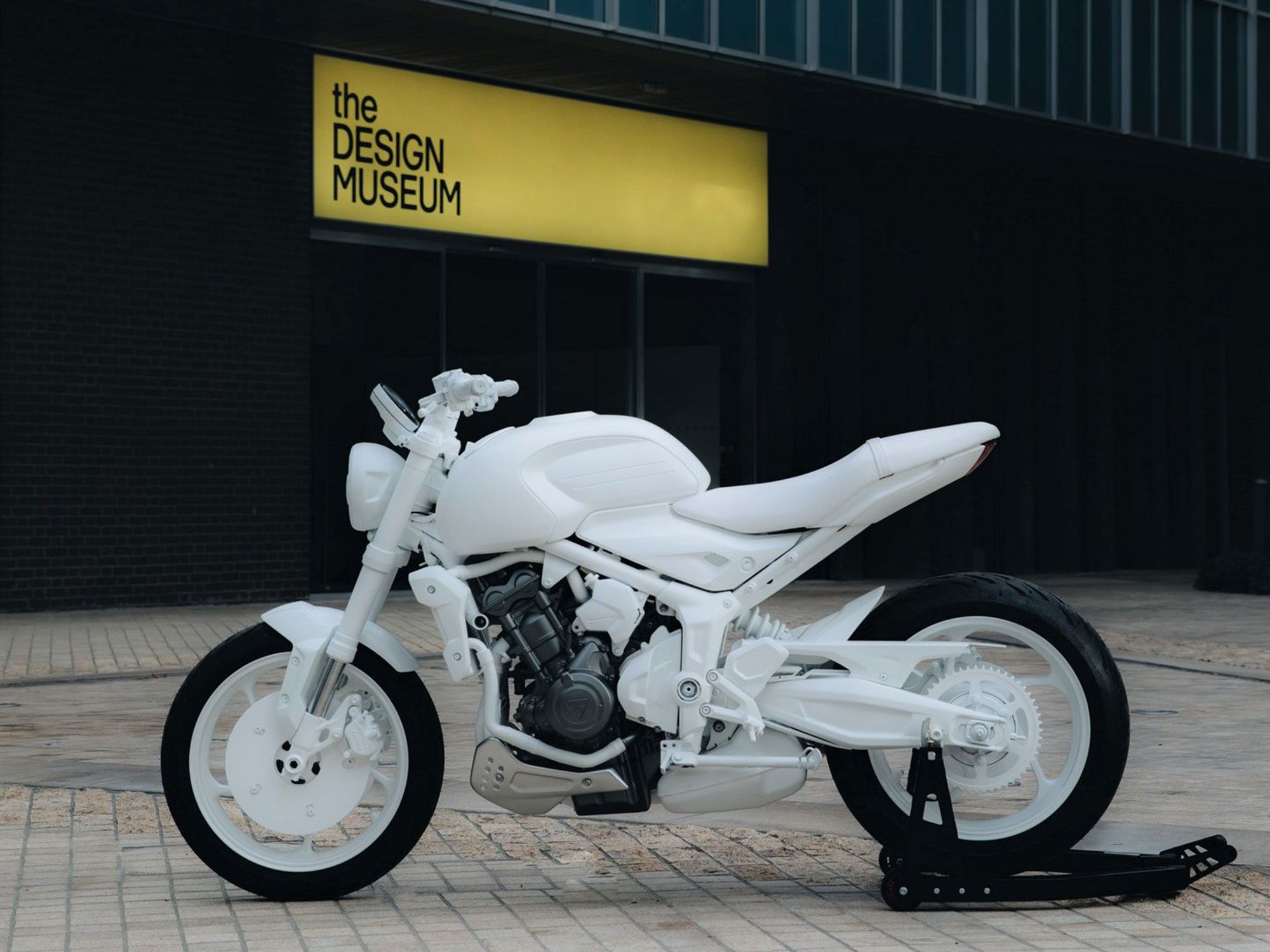 It may look bleached out, but under that white paint, Triumph’s new middleweight Trident “prototype” seems production-ready. (Triumph Motorcycles/)

Previewed as a “design prototype” that’s really not much less than a production-ready bike sprayed white to give the illusion that it’s a styling model, the newest Trident revives a famous name and marks Triumph’s entry into the affordable mass-market segment. Having proved that it can make bikes to rival the best that Europe, Japan, and America can offer in the streetfighter, adventure bike, retro, and cruiser fields, the British firm is setting its sights on models like the Kawasaki Z650, Honda CB650R, Yamaha MT-07, and Suzuki SV650. 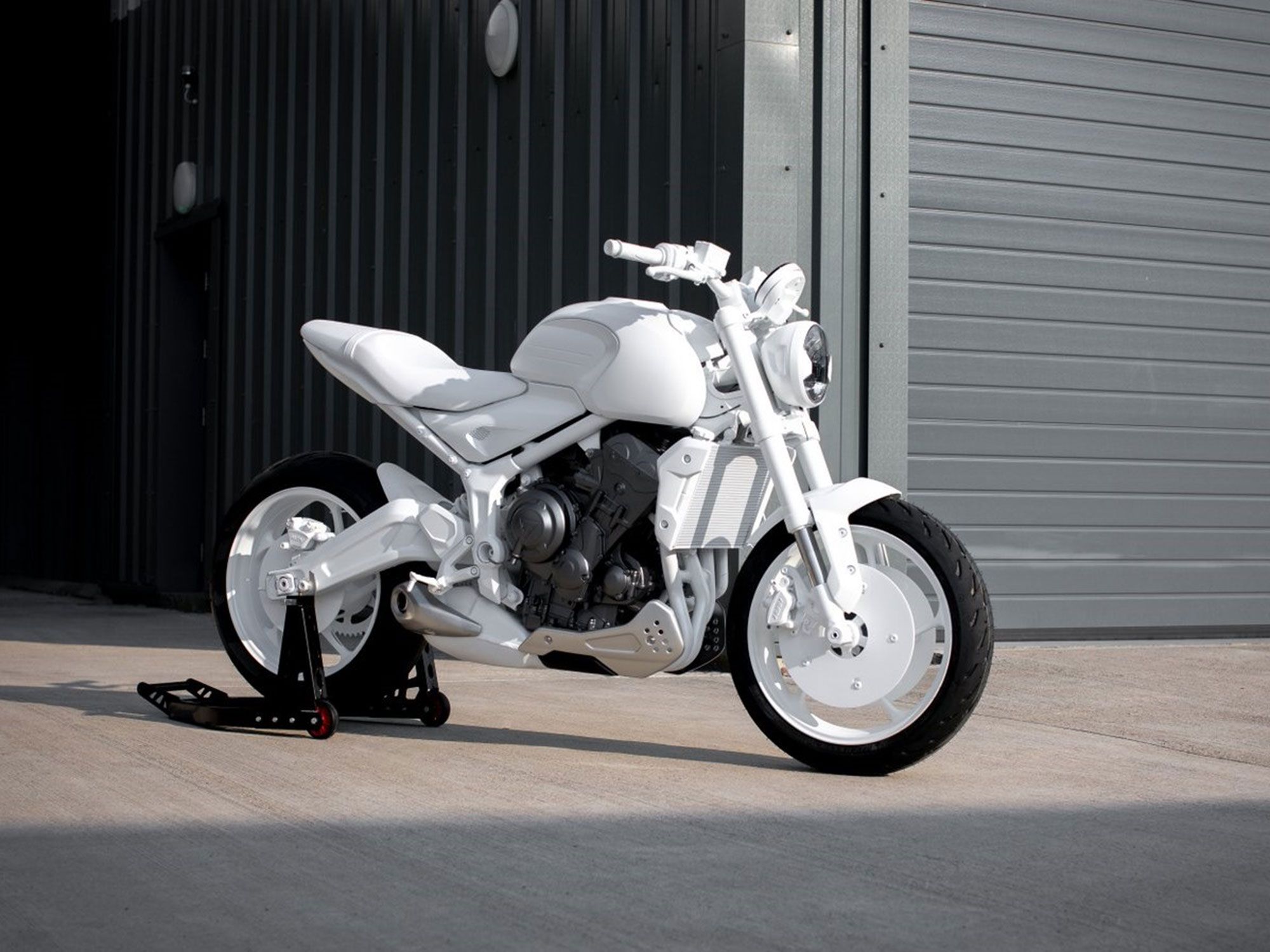 No specs have yet been given, but all indications are that the new Trident is squarely focused on the affordable naked middleweight segment. (Triumph Motorcycles/)

What’s The Trident About?

Despite showing the bike to the press, Triumph is remaining coy when it comes to specific details of the Trident. It’s the culmination of four years’ work, with engineering done at the firm’s Hinckley headquarters and a dash of Italian styling courtesy of Rodolfo Frascoli.

While the company hasn’t revealed much about the bike itself, it’s clear that the engine is based on the firm’s smaller three-cylinder mill, as used in the Street Triple. The company won’t confirm its capacity, but the engine’s components look like they’re borrowed from the original 675cc version of the motor rather than the current Street Triple’s revised 765cc unit or the even bigger 900cc derivative that’s now in the Tiger. 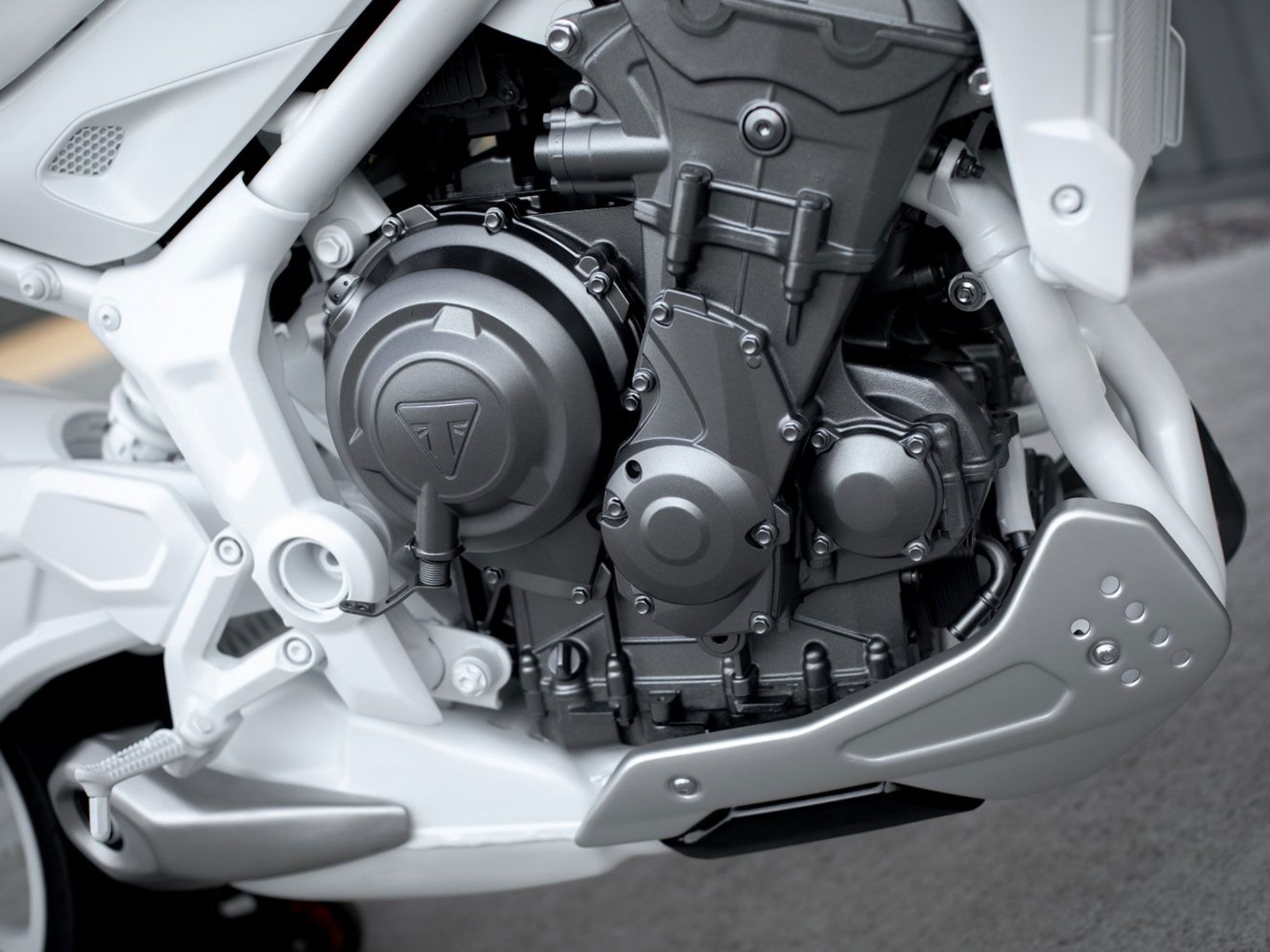 Displacement hasn’t been confirmed, but the new bike’s engine looks to be based on the triple-cylinder powerplant used in the Street Triple. (Triumph Motorcycles/)

In fact, there’s a strong chance the Trident could use the little-known 660cc version of the engine. Originally developed for the Australian market to suit the country’s LAMS (Learner Approved Motorcycles Scheme) rules, which limit new license holders to no more than 660cc, it featured the 74mm bore of the 675cc original but added a short-throw crankshaft for a 51.1mm stroke instead of 52.3mm. A second-gen 660 is offered in Europe, simply called the Street Triple S, using a 76mm bore and 48.5mm stroke. However, it has the updated engine castings of the 765cc Street Triple rather than the older design seen on the Trident prototype, suggesting the new bike might use the original, longer-stroke version of the 660 engine.

In terms of performance, Triumph is sure to be aiming for a peak power of no more than 94 hp. Under convoluted European motorcycle rules, riders who’ve recently gained their licenses are limited to no more than 47 hp but can ride restricted machines provided the model they’re based on don’t make more than twice that. Hence 94 hp has become something of a magic number for any bike aiming to grab a big slice of the novice rider market. 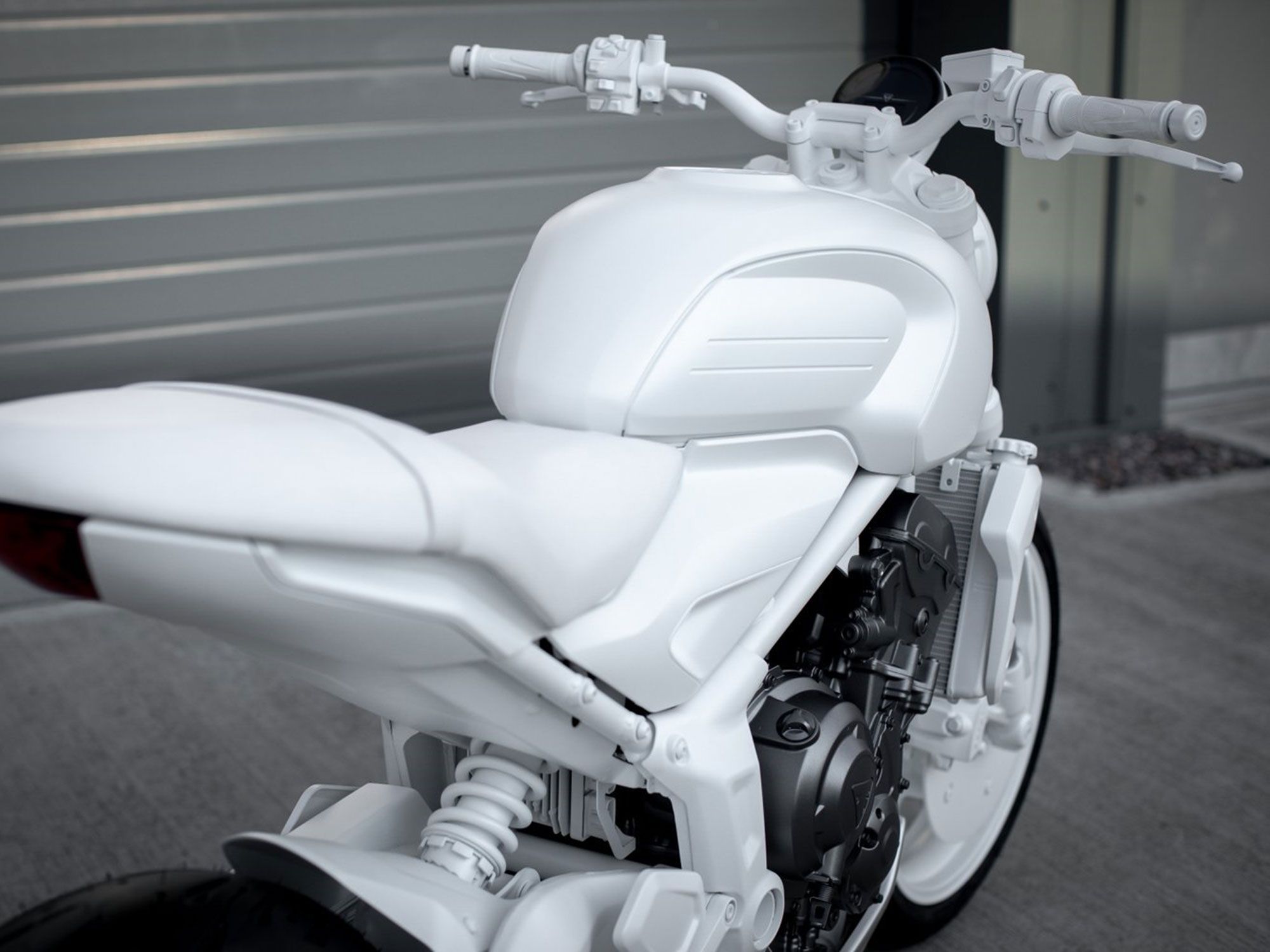 With a pillion portion reaching almost to the taillight, the new bike borrows elements from the ’07 Street Triple, though the retro tank shape is a clear nod to the firm’s past. (Triumph Motorcycles/)

The Trident’s styling seems aimed to split the difference between the firm’s two most successful models—the retro Bonneville and the Street Triple. The tail, with the pillion seat extending all the way to the rear light, is reminiscent of the original 2007 Street Triple, but the tank speaks more of Triumph’s 1960s heyday, with a rounded top and deeply scalloped sides. A single, circular headlight is another throwback, but the bike stops short of being overtly retro, with 21st-century proportions coming courtesy of the 17-inch wheels, short tail unit, belly-mounted exhaust, and forward-focused mass. 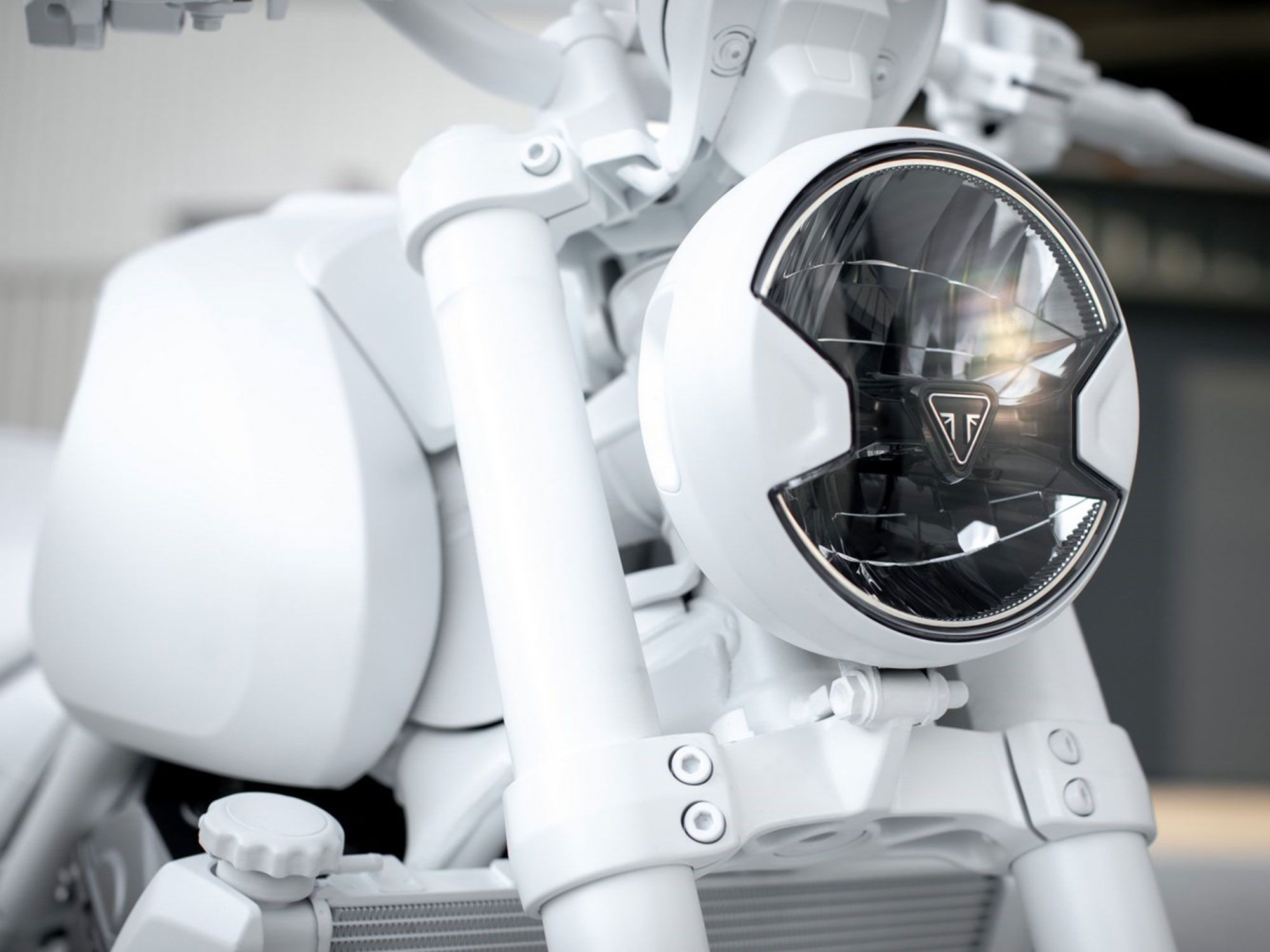 The round solo headlight shape is also a retro touch, but no doubt there are modern elements within. (Triumph Motorcycles/)

Steve Sargent, Triumph’s chief product officer, said: “The Trident design prototype marks the beginning of an exciting new chapter for Triumph, where the brief was all about fun, from the look to the ride. With its pure minimalist form, clean lines, Triumph design DNA and more than a hint of our Speed Triple’s muscular poise, this gives the first exciting glimpse at the full Trident story to come. Ultimately our aim was to bring a new take on character and style, alongside the accessible easy handling and quality Triumph is known for—at a price that’s really competitive.” 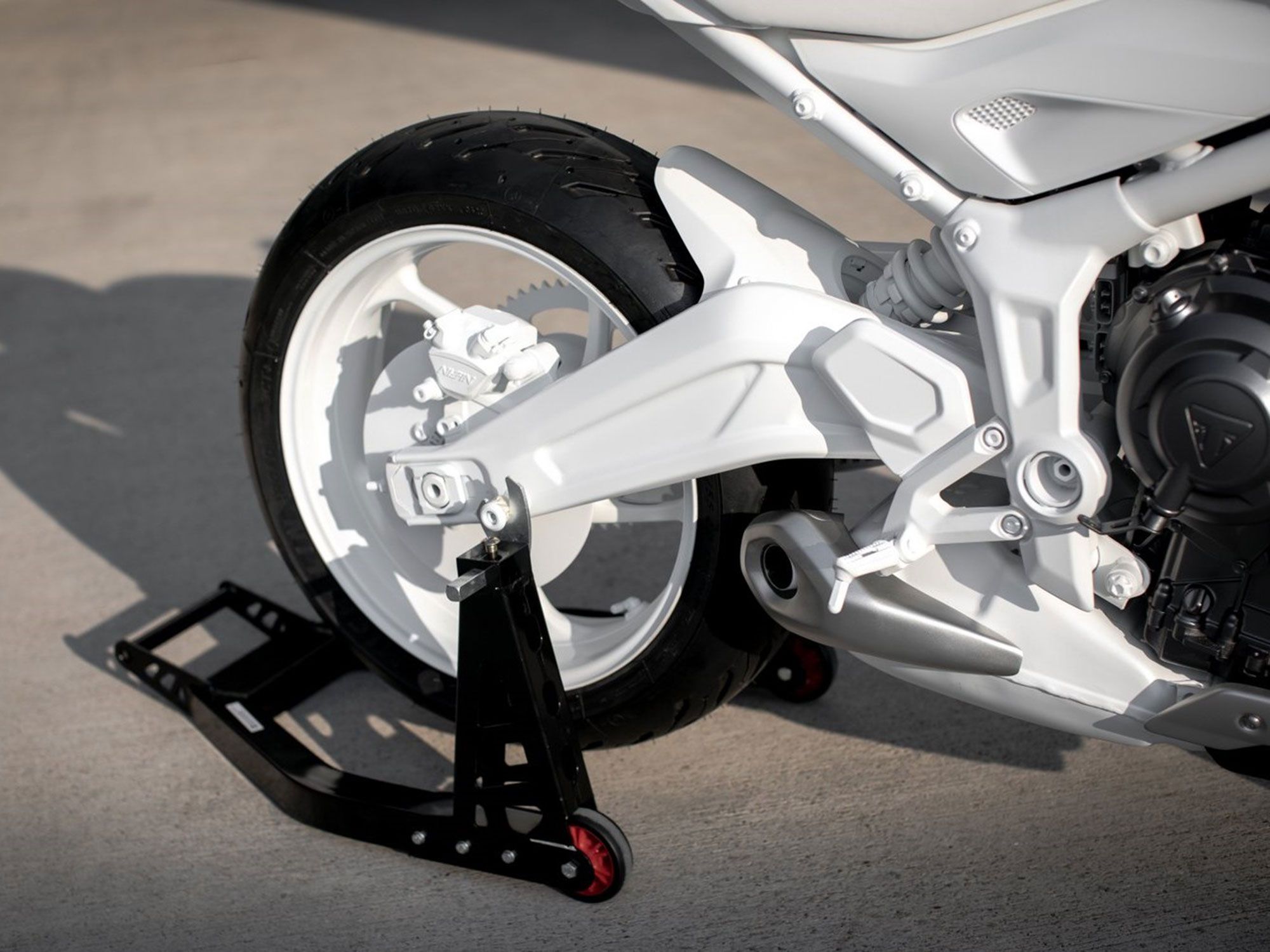 An all-new frame is clearly one of the keys to both the Trident’s simplicity and its intended low price. Made of steel tubes, it’s clearly meant to be cheap to mass-produce. While the white paint on the prototype hides it, the swingarm pivot section, which has the look of an alloy casting, seems actually to be a plastic cover over steel underpinnings. The swingarm really is aluminum, while the front suspension, the brakes, and the wheels all appear to be straight from the entry-level Street Triple S. That means you get a nonadjustable Showa 41mm fork ending with Nissin two-pot calipers gripping 310mm discs. The 17-inch wheels, front suspension, and brakes all look cribbed from the entry-level Street Triple S. That’s not a bad thing. (Triumph Motorcycles/)

Why The Middle Class Matters

It’s hard to take much from 2020′s motorcycle sales so far thanks to the effects of lockdowns and factory closures, but many manufacturers are reporting a boom in sales of cheap, 650cc-class bikes. In the UK, the Royal Enfield Interceptor 650 has become a best seller, while bikes like the Ninja 650, Vulcan 650, and Yamaha Tracer 700 are also showing huge sales growth. That’s in part because lockdowns prevented the normal early season trade-ins—with many existing motorcyclists holding on to their bikes for an extra year and starving dealers of second-hand stock. Simultaneously, commuters keen to get away from crowded public transport during the pandemic are being tempted by motorcycles—especially lapsed motorcyclists who already hold the required license. Low-cost, midrange all-rounders seem to be coming out strongly as a result.

With the financial aftershocks of the pandemic sure to rumble on for years to come, the demand for value-for-money bikes isn’t likely to end anytime soon. Just how cheap can Triumph make the Trident? There’s no official word on the price, but it will be cheaper than the firm’s existing triples. At the moment, the cheapest S model of the Street Triple—not sold in the US—costs 8,100 pounds in the UK including taxes (equivalent to $10,600), while a Kawasaki Z650 sells for 6,649 pounds ($8,700) and a Honda CB650R is 7,199 pounds ($9,450). The Trident will be aimed at those machines, which means it will have to undercut the Street Triple S by around 1,000 pounds ($1,300). 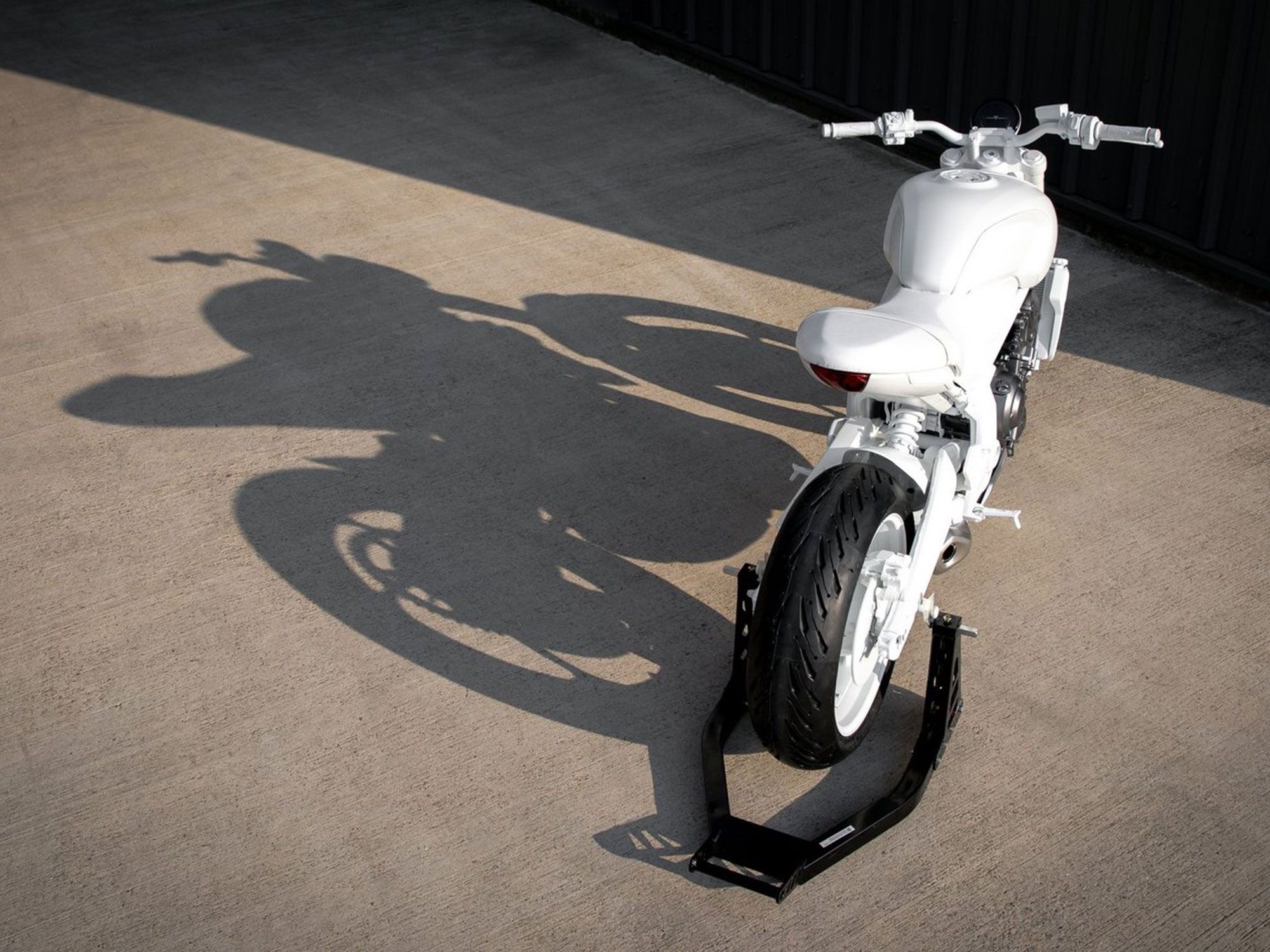 The overall proportions hint at an accessible, upright riding position and a slimmed-down stance. (Triumph Motorcycles/)

Triumph has been slavishly renewing its trademark rights to the “Trident” name for years while waiting for the right model to use it on. The original came in 1968, debuting Triumph’s first three-cylinder engine alongside the BSA Rocket 3 (a badge-engineered version of the same bike), but died by 1975 as Triumph fell into financial trouble. 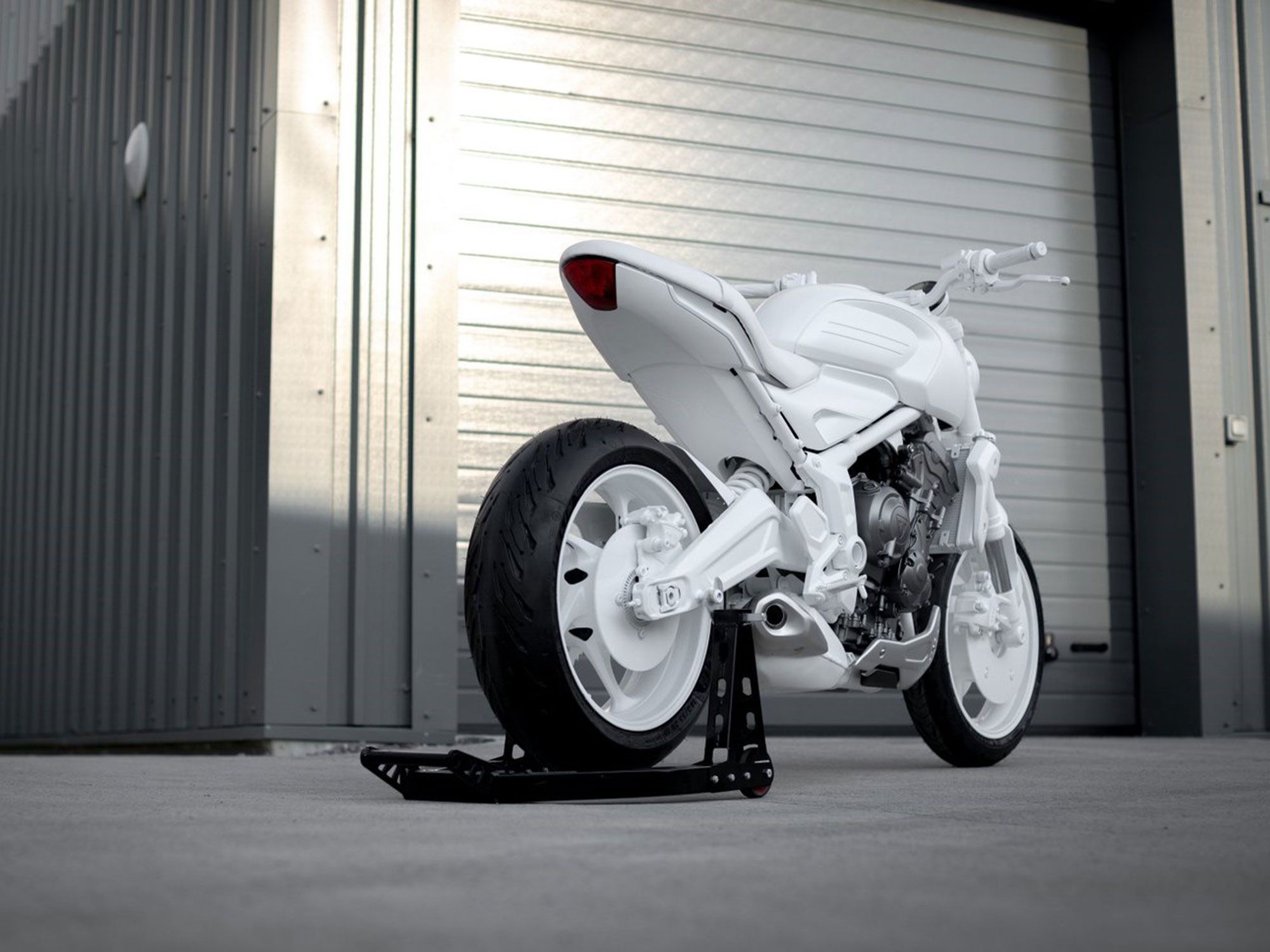 Triumph has been looking for the right model to use the Trident name again for a while now. This one looks like it’s ready for prime time. (Triumph Motorcycles/) 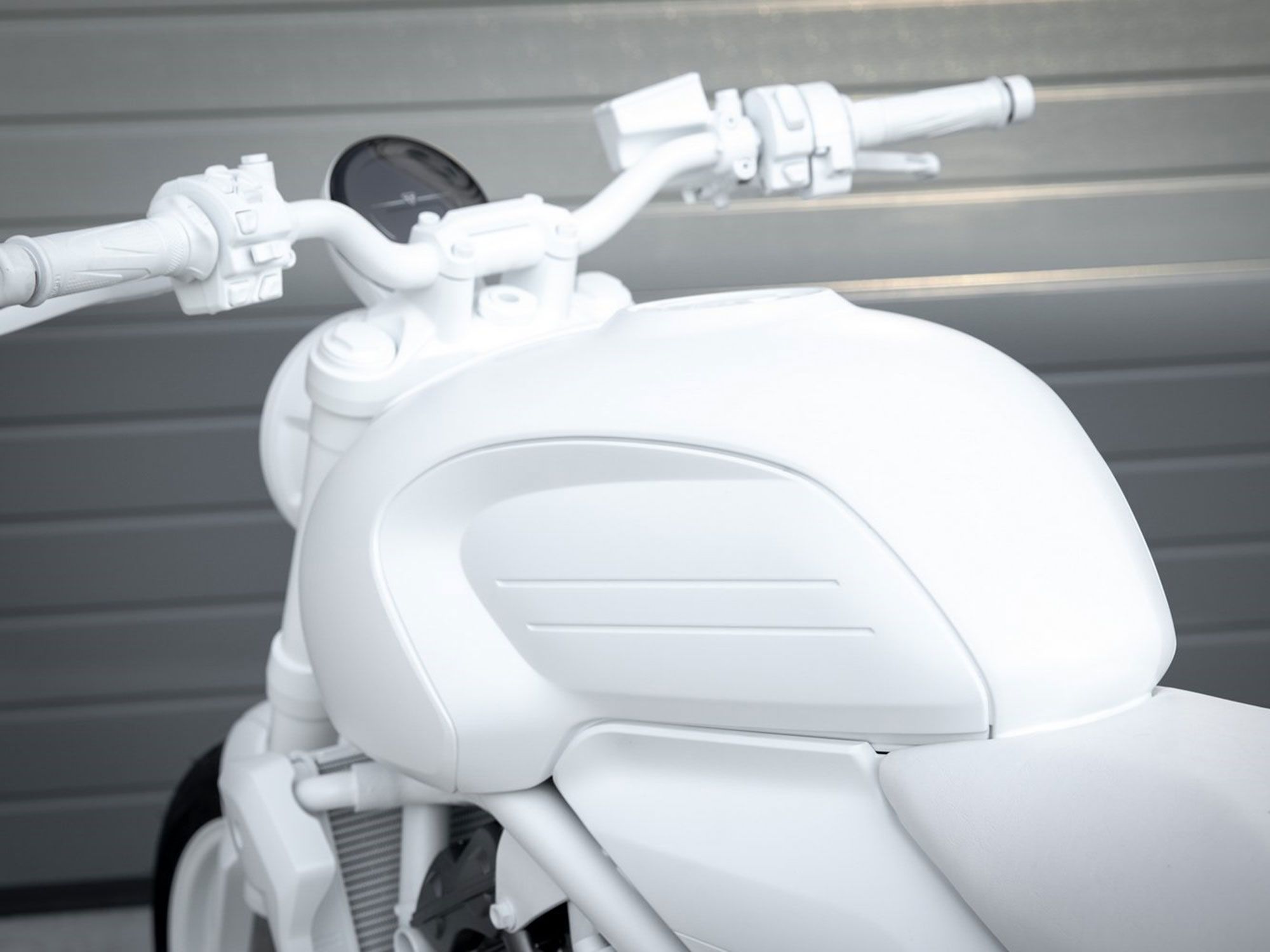 Word on the street is that the new Trident will be launched in spring of 2021. (Triumph Motorcycles/)

John Bloor’s reborn Triumph brought the Trident name back in 1990, initially on a 750 triple. It grew to 900cc in 1991 and remained in the range until 1998. Since then there have been plenty of rumors but no new Trident—although the name was earmarked for use as a sub-brand of Triumph-made, side-by-side four-wheelers that very nearly reached production under the Trident Powersports name in 2014, only for the entire project to be dropped just months before its planned launch.

Published in: NewsThe model honors the past while offering modern on- and off-road trekking performance Sixty years after Honda introduced customers to the joys of...
Read more
Previous articleProblems With Old Carburetors
Next article2020 BMW M Grand Prix Of Styria